The Methodist Episcopal Church, sometimes referred to as the M.E. Church, was a development of the first expression of Methodism in the United States. It officially began at the Baltimore Christmas Conference in 1784, with Francis Asbury and Thomas Coke as the first bishops. In the early 19th century it became the largest Protestant denomination in the U.S., and is now second to the Southern Baptist Convention. In 1939 it merged with the Methodist Episcopal Church, South, and the Methodist Protestant Church to form the Methodist Church. In 1968 it merged with the Evangelical United Brethren Church to form the present United Methodist Church.

The founder of Methodism, John Wesley, was an Anglican. Prior to the American Revolution, some people had concerns about Methodist evangelism in the colonies that took no heed of established Anglican parishes.[citation needed] For example, the Rev. Devereux Jarratt (1733–1801) was and remained an Anglican clergyman who founded Methodist societies in Virginia and North Carolina. However, after the 1784 establishment of the Methodist Episcopal Church, he expressed shock that the Methodists "had rejected their old mother."[1] It is possible that Jarratt and others considered the Methodist movement to be some sort of 18th-Century parachurch organization. However, the arrival in America of more and more migrants from England who saw themselves as Methodist, not Anglican, drove the establishment of a distinctly Methodist denomination.[citation needed]

The earliest forms of Methodism were not originally referred to as a "connexion" because members were expected to seek the sacraments in the Church of England or Anglican Church.[2] By the 1770s, however, they had their own chapels. In addition to salaried circuit riders (who were paid just over one-quarter what salaried Congregationalist ministers earned at the time), there were also unsalaried local ministers who held full-time jobs outside the church; class leaders who conducted weekly small groups where members were mutually accountable for their practice of Christian piety; and stewards who often undertook administrative duties.

Circuit riders, many of whom were laymen, traveled by horseback to preach the gospel and establish churches until there was scarcely any crossroad community in the United States without a Methodist presence.[citation needed]

The earliest Episcopal Methodists in North America were often drawn from the middle-class trades. Women were more numerous among members than men, and adherents outnumbered official members by as many as five-to-one. Adherents, unlike members, were not publicly accountable for their Christian life and therefore did not usually attend weekly class meetings. Meetings and services were often characterized by extremely emotional and demonstrative styles of worship that were often condemned by contemporary Congregationalists and Presbyterians. It was also very common for exhortations — testimonials and personal conversion narratives distinguishable from sermons because exhorters did not "take a text" from the Bible — to be publicly delivered by both women and slaves. Some of the earliest class leaders were also women.[citation needed]

The following list represents some major organizational developments in the United States. There have also been divisions and merges in Great Britain and elsewhere.[3]

1767: The Rev. Philip William Otterbein, (1726-1813) of Baltimore and Martin Boehm started Methodist evangelism among German-speaking immigrants to form the United Brethren in Christ.[4] This development had to do only with language. Methodist Episcopal Bishop Francis Asbury later preached at Otterbein's 1813 funeral.[5] In 1968 it merged to form the United Methodist Church.

1793: The first recognized split from the Methodist Episcopal Church was led by a preacher named James O'Kelly who wanted clergy to be free to refuse to serve where the bishop appointed them.[6] He organized the "Republican Methodists," later called simply the Christian Church or Christian Connection, that through its successors and mergers eventually became part of the future United Church of Christ in 1957.

1800: The Evangelical Association was organized by Jacob Albright to serve German-speaking Methodists.[7]

1816: The African Methodist Episcopal Church was organized in Philadelphia by Richard Allen for Wesley followers/African-Americans. Bishop Francis Asbury had ordained him earlier in 1799.

1828: The Canadians formed their own Methodist Church.[9]

1828: The Methodist Protestant Church split off under Nicholas Snethen, who had earlier argued against the O'Kelly split, along with Asa Shinn. The issue was the role of laity in governance of the church. In 1939, it merged.[10]

1860: The Free Methodist Church was organized by B. T. Roberts and others. The differences centered around a traditional/rural vs. modern/urban ethos.[13]

Further information: History of Methodism in the United States 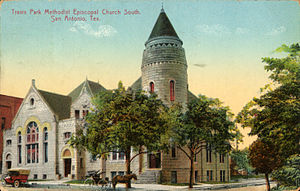 The church split over the question of slavery in 1844 with the Methodist Episcopal Church, South being formed in southern states.[16]

In the late 1840s, separate Conferences were formed for German-speaking members of the Methodist Episcopal Church who were not members of the Evangelical Association or the United Brethren in Christ (later merged to form the Evangelical United Brethren (EUB)). Among these was the St. Louis German Conference, which in 1925 was assimilated into the surrounding English-speaking conferences, including the Illinois Conference.[17]

Many Northerners had only recently become religious (thanks to the Second Great Awakening) and religion was a powerful force in their lives. No denomination was more active in supporting the Union than the Methodist Episcopal Church. Carwardine argues that for many Methodists, the victory of Lincoln in 1860 heralded the arrival of the kingdom of God in America. They were moved into action by a vision of freedom for slaves, freedom from the terror unleashed on godly abolitionists, release from the Slave Power's evil grip on the state, and a new direction for the Union.[18] Methodists formed a major element of the popular support for the Radical Republicans with their hard line toward the white South. Dissident Methodists left the church.[19]

The denominations all sent missionaries, teachers and activists to the South to help the Freedmen. Only the Methodists made many converts, however.[20] Activists sponsored by Northern Methodist Church played a major role in the Freedmen's Bureau, notably in such key educational roles as the Bureau's state superintendent or assistant superintendent of education for Virginia, Florida, Alabama and South Carolina.[21]

During Reconstruction the Methodists moved into a dozen Southern cities to seize control, with Army help, of churches and other buildings that had belonged to the southern branch of the church. In a highly controversial move, the Northern Methodists used the Army to seize control of Methodist churches in large cities, over the vehement protests of the Southern Methodists. Historian Ralph Morrow reports:

A War Department order of November, 1863, applicable to the Southwestern states of the Confederacy, authorized the Northern Methodists to occupy "all houses of worship belonging to the Methodist Episcopal Church South in which a loyal minister, appointed by a loyal bishop of said church, does not officiate."[22][23][24][25]

Across the North the Methodists were strong supporters of Radical policies. The Methodist family magazine Ladies' Repository promoted Christian family activism. Its articles provided moral uplift to women and children. It portrayed the War as a great moral crusade against a decadent Southern civilization corrupted by slavery. It recommended activities that family members could perform in order to aid the Union cause.[26] The focus on social problems paved the way for the Social Gospel movement a few years later. Matthew Simpson, a famous Bishop, played a leading role in mobilizing the Northern Methodists for the cause. His biographer calls him the "High Priest of the Radical Republicans."[27] The Methodist Ministers Association of Boston, meeting two weeks after Lincoln's assassination, called for a hard line against the Confederate leadership:

Resolved, That no terms should be made with traitors, no compromise with rebels.... That we hold the National authority bound by the most solemn obligation to God and man to bring all the civil and military leaders of the rebellion to trial by due course of law, and when they are clearly convicted, to execute them.[28][29]

There are many offshoots of the original Methodist Episcopal Church in the US. For more detail see: Methodism.[31]