The Fellowship has Official Observer status with the World Council of Churches. The MCC has been denied membership in the US National Council of Churches, but many local MCC congregations are members of local ecumenical partnerships around the world and MCC currently belongs to several statewide councils of churches in the United States.[2][3] 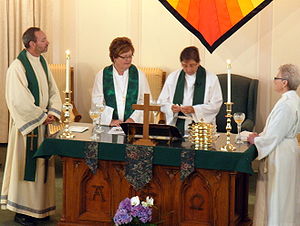 Eucharist at an MCC worship service

MCC bases its theology on the historic creeds of the Christian Church such as Apostles' and Nicene creed. Every church is required to celebrate the Eucharist at least once a week, and to practice open communion, meaning that recipients need not be a member of the MCC or any other church to receive the Eucharist. Beyond that MCC allows its member churches independence in doctrine, worship, and practice. Worship styles vary widely from church to church.

MCC sees its mission being social as well as spiritual by standing up for the rights of minorities, particularly those of lesbian, gay, bisexual, and transgender (LGBT) people. MCC has been a leading force in the development of queer theology.[4]

Many local churches are also involved with other national and international campaigns, including Trade Justice[5][dated info] and Make Poverty History 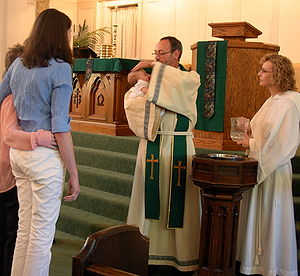 Infant baptism in an MCC church

Brent Hawkes and the Metropolitan Community Church of Toronto were key players in the legal action that ultimately brought same-sex marriage to Canada.[7]

A notable aspect of MCC's theology is its position on homosexuality and Christianity where it fully embraces and welcomes lesbian, gay, bisexual and transgender people. Indeed, the majority of members are lesbian, gay, bisexual, or transgender, with many clergy being openly LGBT. MCC fully affirms the ministry of both men and women, seeing them as equal, and the recent election of Nancy Wilson as Moderator makes MCC one of a small number of communions with female senior leadership.[8]

The first congregation was founded in Huntington Park, California by Troy Perry on October 6, 1968.[9] This was a time when Christian attitudes toward homosexuality were almost universally unfavorable. The first congregation originally met in Perry's Huntington Park home. The church first gained publicity by ads taken out in the Advocate magazine.

In 1969 the congregation had outgrown Perry's living room and moved to rented space at the Huntington Park Women's Club. It was at this point in time membership in the church grew to about 200 people. Due to discrimination the church was forced to move, and had a hard time finding a permanent place. During this period during the spring and summer of 1969 the church moved first to the Embassy Auditorium, and then a United Methodist Church for two weeks. The church ended up renting out the Encore Theatre in Hollywood from 1969 through 1971.

Within months of the first worship service, Perry began receiving letters and visits from people who wanted to start Metropolitan Community Churches in other cities. MCC groups from eight U.S. cities were represented at the first General Conference in 1970: Los Angeles, San Francisco, San Diego, and Costa Mesa, California; Chicago, Illinois; Phoenix, Arizona; Kanohe, Hawaii; and Dallas, Texas. An MCC group existed in Miami, Florida, but did not send a delegate.[10]

The church had its final move to a building it purchased at 2201 South Union Avenue in Los Angeles in early 1971. The building was consecrated on March 7, 1971. MCC worshiped there until January 27 of 1973, when the building was destroyed by what the Fire Department called a fire "of suspicious origin."[10]

The MCC has grown since then to have a presence in 37 countries with 222 affiliated churches. The largest presence is found in the United States, followed by Canada. The denomination continues to grow: In 2010, El Mundo reported that the first MCC congregation in Spain would be established in Madrid in October. It would be the first church to recognize and perform religious same-sex marriages in the country, as the Roman Catholic Church (the former state church) refuses to perform same-sex marriage ceremonies or adoptions.[11][12]

Perry served as moderator of the Fellowship until 2005, when Nancy Wilson was elected moderator by the General Conference; she was formally installed in a special service at the Washington National Cathedral in Washington, D.C. on October 29, 2005.[14] She is only the second person, and the first woman, to serve as moderator.[15]

In 2003, a scandal occurred involving the flagship of the church, as well as the largest gay church in the world, Cathedral of Hope, when former board member Terri Frey accused minister Michael S. Piazza of financial impropriety, an accusation that prompted the UFMCC to open an investigation. However, the investigation ended when the Cathedral's membership voted to disaffiliate from UFMCC with 88% support. The split cost UFMCC 9% of its membership, and 7% of its annual operating budget. Church members, including copastor Mona West, claimed that the vote was less about the investigation and more about the congregation's long-simmering frustration with the denomination, including the opinion that the denomination was focused too much on gay issues and hampered their desire to reach out to Dallas residents disaffected by conservative churches; as church member Michael Magnia explained: "The tie with MCC was more about gays and lesbians. You're going to have a difficult time getting even progressive heterosexuals to come to a church that is anchored to a gay and lesbian church." [16]

In 2011 the Good Shepherd Parish of the MCC was inducted into the Chicago Gay and Lesbian Hall of Fame.[17]

MCC is led by a Council of Elders (COE) and a Governing Board. The Council of Elders consists of a Moderator and regional elders appointed by the Moderator, approved by the Governing Board, and affirmed by the General Conference. The COE has responsibility for leading the Fellowship on matters of spirituality, mission development, and Christian witness. The Governing Board is made up of the Moderator, 4 Lay members and 4 Clergy members elected by General Conference, and is the legal corporate board of the denomination, handling responsibility for financial and fiduciary matters.[18] 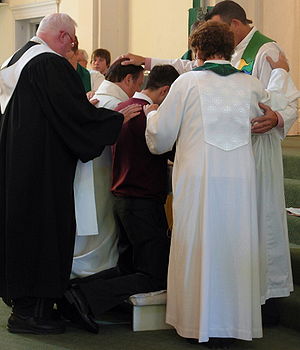 Ordination of clergy by the laying on of hands

The primary responsibility of Elders is to give pastoral leadership and care to enable the Fellowship in its spiritual journey. The Elders exercise spiritual and pastoral authority to build a shared vision for the UFMCC, prepare UFMCC for the future, and support UFMCC’s strategic direction. The Elders serve as official representatives of the Fellowship in the areas of public and community relations; provide oversight of and support to congregations; consult with churches on issues related to church development; and fulfill other ecclesial and ceremonial duties.[18]

The worldwide church is administratively divided into 7 regions, each of which are represented by an elder on the Council of Elders.[22] Since the 2000s, many are further divided into sub-regional networks.[23] 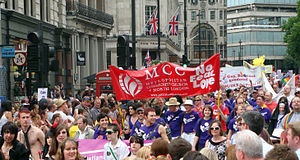 Each affiliated member church of MCC is a self-governing, legally autonomous body, is vested in its congregational meeting which exerts the right to control all of its affairs, subject to the provisions of the UFMCC Articles of Incorporation, bylaws, or documents of legal organization, and the General Conference. An ordained pastor provides spiritual leadership and administrative leadership as the moderator of a local church administrative body. In the United States and Canada the local church administrative body is usually called "board of directors". Each local congregation is required to send a tithe or assessment of income to UFMCC, currently set to reduce from 15% of income to 10% by 1% every two years stating in 2005.[24] Each local church elects its own pastor from the roster of MCC credentialed clergy.

Each local congregation is free to determine matters of worship, practice, theology and ministry providing they meet certain basic requirements involving open access to communion and subscription to the traditional Christian creeds. Styles of worship include liturgical, charismatic, evangelical, traditional and modern — diversity is an important part of MCC.

MCC was featured in the 2009 Lifetime Television movie Prayers for Bobby.