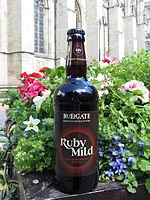 Mild ale is a low-gravity beer with a predominantly malty palate that originated in Britain in the 17th century or earlier. Modern mild ales are mainly dark coloured with an abv of 3% to 3.6%, although there are lighter hued examples as well as stronger examples reaching 6% abv and higher.

The term mild originally meant young beer or ale as opposed to "stale" aged beer or ale with its resulting "tang". In more recent times it has been interpreted as denoting "mildly hopped".

Light mild is generally similar, but pale in colour, for instance Harveys Brewery Knots of May. There is some overlap between the weakest styles of bitter and light mild, with the term AK being used to refer to both. The designation of such beers as "bitter" or "mild" has tended to change with fashion. A good example is McMullen's AK, which was re-badged as a bitter after decades as a light mild. AK (a very common beer name in the 19th century) was often referred to as a "mild bitter beer" interpreting "mild" as "unaged".

Once sold in every pub, mild experienced a sharp decline in popularity after the 1960s and was in danger of completely disappearing. However, in recent years the explosion of microbreweries has led to a modest renaissance and an increasing number of milds (sometimes labelled "Dark") are now being brewed.

The Campaign for Real Ale has designated May as "Mild Month". In the United States, a group of beer bloggers organised the first 'American Mild Month' for May 2015, with 45 participating breweries across the country.[1]

"Mild" was originally used to designate any beer which was young, fresh or unaged and did not refer to a specific style of beer. Thus there was Mild Ale but also Mild Porter and even Mild Bitter Beer. These young beers were often blended with aged "stale" beer to improve their flavour. As the 19th century progressed and public taste moved away from the aged taste, unblended young beer, mostly in the form of Mild Ale or Light Bitter Beer, began to dominate the market.[2]

In the 19th century a typical brewery produced three or four mild ales, usually designated by a number of X's, the weakest being X, the strongest XXXX. They were considerably stronger than the milds of today, with the gravity ranging from around 1.055 to 1.072 (about 5.5% to 7% abv). Gravities dropped throughout the late 19th century and by 1914 the weakest milds were down to about 1.045, still considerably stronger than modern versions.[3]

The draconian measures applied to the brewing industry during the First World War had a particularly dramatic effect upon mild. As the biggest-selling beer, it suffered the largest cut in gravity when breweries had to limit the average OG of their beer to 1.030. In order to be able to produce some stronger beer - which was exempt from price controls and thus more profitable - mild was reduced to 1.025 or lower.[4]

Modern dark mild varies from dark amber to near-black in colour and is very light-bodied. Its flavour is dominated by malt, sometimes with roasty notes derived from the use of black malt, with a subdued hop character, though there are some quite bitter examples. Most are in the range 1.030–1.036 (3–3.6% abv).

Light mild is generally similar, but paler in colour. Some dark milds are created by the addition of caramel to a pale beer.

Until the 1960s mild was the most popular beer style in England.[5] Pockets of demand remain, particularly in the West Midlands and North West England, but has been largely ousted by bitter and lager elsewhere.[6] In 2002, only 1.3% of beer sold in pubs was Mild.[7] Mild's popularity in Wales, in particular, persisted as a relatively low-alcohol, sweet drink for coal miners. Some brewers have continued to produce mild, but have found it sells better under a different name: for instance, Brains's mild was renamed Dark.[8] Outside the United Kingdom mild is virtually unknown, with the exception of Old in New South Wales and some microbrewery recreations in North America and Scandinavia.

Mild ales are generally based on mild malt or pale malt. Most milds contain, in addition, a quantity of crystal malt; dark milds, meanwhile, make use of chocolate malt, black malt or dark brewing sugars. Milds tend to be lightly hopped compared to pale ale and are usually low in alcohol; strong mild ales used to reach six or seven per cent abv, but very few such beers are still brewed. Sarah Hughes Dark Ruby Mild, brewed to a pre-WWI recipe, is a rare example of a strong Mild (6.0% ABV).

As part of the first American Mild Month, the project organizers challenged participating breweries to create a new variation on the mild ale style by brewing with American malts and hops. They defined the 'American Mild' as being 'a restrained, darkish ale, with gentle hopping and a clean finish so that the malt and what hops are present, shine through'.[9]