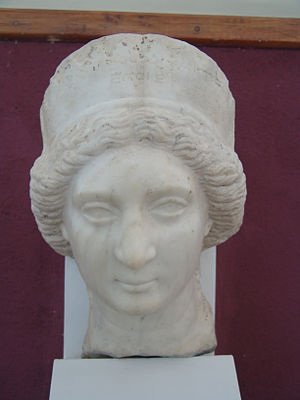 A bust from The National Museum of Iran of Queen Musa, excavated by a French team in Khuzestan in 1939.

Musa was Queen of the Parthian Empire from ca. 2 BC to 4 AD. She is called as Thermusa by Josephus and is also known as Thea Urania (Astarte). She was a concubine given by the Roman Emperor Augustus (27 BC – 14) to King Phraates IV of Parthia (37–2 BC). Around the same time, Augustus recovered the eagle standards (Aquilae) lost by Marcus Licinius Crassus in the Battle of Carrhae in 53 BC.

Phraates IV made her his favored wife; her son Phraates V (2 BC – 4), commonly called Phraataces (a diminutive form), he appointed successor. She persuaded Phraates IV to send his other sons to Rome as hostages. With all rivals out of the way, she and Phraataces poisoned the king and assumed the throne in 2 BC. They appear together on their coins, and were apparently co-rulers.

Josephus alleges that Musa then married Phraates V, and, this being unacceptable to the Parthians, they rose up and overthrew them, offering the crown to Orodes III (who ruled briefly in 6).