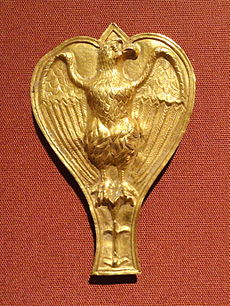 Roman ornament with an aquila (100–200 AD) from the Cleveland Museum of Art. 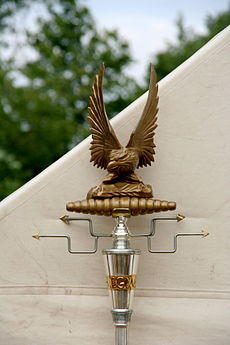 A modern reconstruction of an aquila

An aquila, or eagle, was a prominent symbol used in ancient Rome, especially as the standard of a Roman legion. A legionary known as an aquilifer, or eagle-bearer, carried this standard. Each legion carried one eagle.

The eagle was extremely important to the Roman military, beyond merely being a symbol of a legion. A lost standard was considered an extremely grave occurrence, and the Roman military often went to great lengths to both protect a standard and to recover it if lost; for example, see the aftermath of the Battle of the Teutoburg Forest, where the Romans spent decades attempting to recover the lost standards of three legions.

No legionary eagles are known to have survived. However a number of other Roman eagles, either symbolizing imperial rule or used as funeral emblems, have been discovered.[1]

The signa militaria were the Roman military ensigns or standards. The most ancient standard employed by the Romans is said to have been a handful (manipulus) of straw fixed to the top of a spear or pole. Hence the company of soldiers belonging to it was called a maniple. The bundle of hay or fern was soon succeeded by the figures of animals, of which Pliny the Elder (H.N. x.16) enumerates five: the eagle, the wolf, the ox with the man's head, the horse, and the boar.[2][3] In the second consulship of Gaius Marius (104 BC) the four quadrupeds were laid aside as standards, the eagle (Aquila) alone being retained. It was made of silver, or bronze, with outstretched wings, but was probably of a relatively small size, since a standard-bearer (signifer) under Julius Caesar is said in circumstances of danger to have wrenched the eagle from its staff and concealed it in the folds of his girdle.[4]

Under the later emperors the eagle was carried, as it had been for many centuries, with the legion, a legion being on that account sometimes called aquila (Hirt. Bell. Hisp. 30). Each cohort had for its own ensign the serpent or dragon, which was woven on a square piece of cloth textilis anguis,[5] elevated on a gilt staff, to which a cross-bar was adapted for the purpose,[6] and carried by the draconarius.[7]

Another figure used in the standards was a ball (orb), supposed to have been emblematic of the dominion of Rome over the world;[8] and for the same reason a bronze figure of Victoria was sometimes fixed at the top of the staff, as we see it sculptured, together with small statues of Mars, on the Column of Trajan and the Arch of Constantine.[9] Under the eagle or other emblem was often placed a head of the reigning emperor, which was to the army an object of worship or veneration.[10] The name of the emperor, or of him who was acknowledged as emperor, was sometimes inscribed in the same situation.[11] The pole used to carry the eagle had at its lower extremity an iron point (cuspis) to fix it in the ground, and to enable the aquilifer in case of need to repel an attack.[12]

The minor divisions of a cohort, called centuries, also each had an ensign, inscribed with the number both of the cohort and of the century. This, together with the diversities of the crests worn by the centurions, enabled each soldier to take his place with ease.[13]

Denarius minted by Mark Antony to pay his legions. On the reverse, the aquila of his Third legion.

In the Arch of Constantine at Rome there are four sculptured panels near the top which exhibit a great number of standards and illustrate some of the forms here described. The first panel represents Trajan giving a king to the Parthians: seven standards are held by the soldiers. The second, containing five standards, represents the performance of the sacrifice called suovetaurilia.[14]

When Constantine embraced Christianity, a figure or emblem of Christ, woven in gold upon purple cloth, was substituted for the head of the emperor. This richly ornamented standard was called labarum.[15] The labarum is still used today by the Orthodox Church in the Sunday service. The entry procession of the chalice whose contents will soon become holy communion is modeled after the procession of the standards of the Roman army. 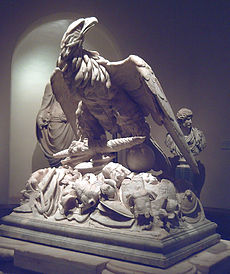 Eagle and weapons from an Augustan-era funerary monument, probably that of Messalla (Prado, Madrid)

Even after the adoption of Christianity as the Roman Empire's religion, the Aquila eagle continued to be used as a symbol. During the reign of Eastern Roman Emperor Isaac I Komnenos, the single-headed eagle was modified to double-headed to symbolise the Empire's dominance over East and West. 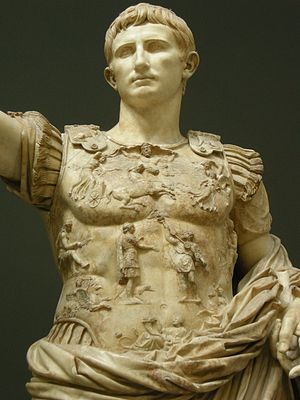 Since the movements of a body of troops and of every portion of it were regulated by the standards, all the evolutions, acts, and incidents of the Roman army were expressed by phrases derived from this circumstance. Thus signa inferre meant to advance,[16] referre to retreat, and convertere to face about; efferre, or castris vellere, to march out of the camp;[17] ad signa convenire, to re-assemble.[18] Notwithstanding some obscurity in the use of terms, it appears that, whilst the standard of the legion was properly called aquila, those of the cohorts were in a special sense of the term called signa, their bearers being signiferi, and that those of the manipuli or smaller divisions of the cohort were denominated vexilla, their bearers being vexillarii. Also, those who fought in the first ranks of the legion before the standards of the legion and cohorts were called antesignani.[19]

In military stratagems it was sometimes necessary to conceal the standards.[20] Although the Romans commonly considered it a point of honour to preserve their standards, in some cases of extreme danger the leader himself threw them among the ranks of the enemy in order to divert their attention or to animate his own soldiers.[21] A wounded or dying standard-bearer delivered it, if possible, into the hands of his general,[22] from whom he had received it signis acceptis.[23]