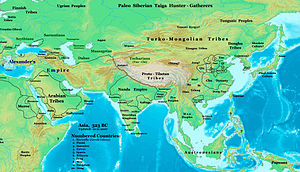 Asia in 323 BC, showing borders of the Nanda Empire in relation to Alexander's Empire and neighbours.

The Nanda dynasty (Sanskrit: Nanda Rājavaṃśa) originated from the region of Magadha in ancient India during the 4th century BCE and lasted between 345–321 BCE. At its greatest extent, the empire ruled by the Nanda Dynasty extended from Bengal in the east, to the Punjab region in the west and as far south as the Vindhya Range.[2] The rulers of this dynasty were famed for the great wealth which they accumulated. The Nanda Empire was later conquered by Chandragupta Maurya, who founded the Maurya Empire.

Establishment of the dynasty

Mahapadma Nanda, who has been described in the Puranas as "the destroyer of all the Kshatriyas", defeated many other kingdoms, including the Panchalas, Kasis, Haihayas, Kalingas,[3] Asmakas, Kurus, Maithilas, Surasenas and the Vitihotras; to name a few.[4] He expanded his territory south of the Vindhya Range into the Deccan Plateau. The Nandas, who usurped the throne of the Shishunaga dynasty c. 345 BCE,[5] were thought to be of low origin.[citation needed] He was the son of Mahanandin, a Kshatriya king of the Shishunaga dynasty and a Shudra mother.[6]

The Nanda kings built on the foundations laid by their Haryanka and Shishunaga predecessors to create the first great empire of north India.[7] To achieve this objective they built a vast army, consisting of 200,000 infantry, 20,000 cavalry, 2,000 war chariots and 3,000 war elephants (at the lowest estimates).[citation needed] According to the Greek historian Plutarch, the size of the Nanda army was even larger, numbering 200,000 infantry, 80,000 cavalry, 8,000 war chariots, and 6,000 war elephants.[8] However, the Nandas never had the opportunity to see their army up against Alexander, who invaded North-western India at the time of Dhana Nanda, since Alexander was forced to confine his campaign to the plains of Punjab and Sindh, for his forces, mutinied and refused to go any further upon encountering the vast army of the Nandas in the Punjab.[citation needed]

A possible indication of Nanda military victories is Kalinga is suggested by the later Hathigumpha inscription of Kharavela, which mentions a King named Nanda building a canal and conquering a place. The existence of a place called Nau Nand Dehra (Nanded) on the Godavari is taken by some scholars as reflecting Nanda rule over the Deccan. The evidence for the extension of Nanda rule into trans-Vindhyan India is not, however, strong.[7]

The Nandas were also renowned for their immense wealth. They undertook irrigation projects and invented standardized measures for trade across their empire, and they ruled with the assistance of many ministers.[3] The Nanda Dynasty was also mentioned in the ancient Sangam literature of the Tamil people. The famous Tamil poet Mamulanar of the Sangam literature described the capital city Pataliputra of the Nanda Dynasty and the wealth and treasure that was accumulated by the great Nanda rulers.[9] Their unpopularity, possibly due to their "financial extortion", facilitated a revolution, leading to their overthrow by Chandragupta Maurya and Kautilya. Nevertheless, "the greatness [...] attained in the Maurya Age would hardly have been possible but for the achievements of their predecessors", the Nandas.[3]

The Mahabodhivamsa lists the following as the nine Nanda kings:[7]