In mathematics, a periodic function is a function that repeats its values in regular intervals or periods. The most important examples are the trigonometric functions, which repeat over intervals of 2π radians. Periodic functions are used throughout science to describe oscillations, waves, and other phenomena that exhibit periodicity. Any function which is not periodic is called aperiodic.

An illustration of a periodic function with period

for all values of x in the domain. If there exists a least positive[1] constant P with this property, it is called the fundamental period (also primitive period, basic period, or prime period.) A function with period P will repeat on intervals of length P, and these intervals are referred to as periods.

Geometrically, a periodic function can be defined as a function whose graph exhibits translational symmetry. Specifically, a function f is periodic with period P if the graph of f is invariant under translation in the x-direction by a distance of P. This definition of periodic can be extended to other geometric shapes and patterns, such as periodic tessellations of the plane.

A function that is not periodic is called aperiodic.

A graph of the sine function, showing two complete periods

For example, the sine function is periodic with period 2π, since

for all values of x. This function repeats on intervals of length 2π (see the graph to the right).

Everyday examples are seen when the variable is time; for instance the hands of a clock or the phases of the moon show periodic behaviour. Periodic motion is motion in which the position(s) of the system are expressible as periodic functions, all with the same period.

For a function on the real numbers or on the integers, that means that the entire graph can be formed from copies of one particular portion, repeated at regular intervals.

A simple example of a periodic function is the function f that gives the "fractional part" of its argument. Its period is 1. In particular,

The graph of the function f is the sawtooth wave. 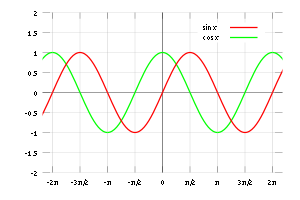 If a function f is periodic with period P, then for all x in the domain of f and all integers n,

A function whose domain is the complex numbers can have two incommensurate periods without being constant. The elliptic functions are such functions. ("Incommensurate" in this context means not real multiples of each other.)

Using complex variables we have the common period function:

As you can see, since the cosine and sine functions are periodic, and the complex exponential above is made up of cosine/sine waves, then the above (actually Euler's formula) has the following property. If L is the period of the function then:

A further generalization appears in the context of Bloch waves and Floquet theory, which govern the solution of various periodic differential equations. In this context, the solution (in one dimension) is typically a function of the form:

That is, each element in

is an equivalence class of real numbers that share the same fractional part. Thus a function like

is a representation of a 1-periodic function.