Phorusrhacids, colloquially known as terror birds, are an extinct clade of large carnivorous flightless birds that were the largest species of apex predators in South America during the Cenozoic, 62–1.8 million years (Ma) ago.[3]

They were roughly 1–3 metres (3.3–9.8 ft) tall. Their closest modern-day relatives are believed to be the 80 cm-tall seriemas. Titanis walleri, one of the larger species, is known from Texas and Florida in North America. This makes the phorusrhacids the only known example of large South American predators migrating north during the Great American Interchange (which occurred after the volcanic Isthmus of Panama land bridge rose ca. 10-15 Ma).[4] It was once believed that T. walleri only became extinct around the time of the arrival of humans in North America,[5] but subsequent datings of Titanis fossils have failed to provide evidence for their survival more recently than 1.8 Ma.[6] However, there exist additional findings that date from 450,000 years ago[3] and 17,000 years ago,[1] which suggest that at least some phorusrhacids survived until the late Pleistocene in Uruguay, although this has been considered as dubious.[7]

Phorusrhacids may have even made their way into Africa, with the genus Lavocatavis recently discovered in Algeria, although its status as a true phorusrhacid is questionable.[8] A possible European form, Eleutherornis, has also been identified, suggesting that this group had a wider geographical range in the Paleogene.[9][10]

Based on Claudia P. Tambussi, Ricardo de Mendoza, Federico J. Degrange, and Mariana B. Picasso’s work, the phorusrhacid's neck can be divided into three main regions (region 1, region 2, and region 3). In the higher regions of the neck, the phorusrhacid has bifurcate neural spines (BNS) while it has high neural spines in its lower regions. This suggests that the phorusrhacid had a highly flexible and developed neck allowing it to carry its heavy head and strike with terrifying speed and power. Although the phorusrhacid externally looks like it has a short neck, its flexible skeletal neck structure proves that it can expand farther beyond the expected reach and intimidate its prey using its height, allowing it to strike more easily. Once stretched out into its full length in preparation for a downward strike, its developed neck muscles and heavy head can produce enough momentum and power to cause fatal damage to the Terror Bird’s prey.[11]

Kelenken guillermoi, from the Langhian stage of the Miocene epoch, some 15 million years ago, discovered in Patagonia in 2006, represents the largest bird skull yet found. The fossil has been described as being a 71 cm (28 in), nearly intact skull. The beak is roughly 46 cm (18 in) long and curves in a hook shape that resembles an eagle's beak. Most species described as phorusrhacid birds were smaller, 60–90 cm (2.0–3.0 ft) tall, but the new fossil belongs to a bird that probably stood about 3 m (9.8 ft) tall. Scientists theorize that the large terror birds were extremely nimble and quick runners able to reach speeds of 48 km/h (30 mph).[12]

Most phorusrhacids were very fast and agile. All members possessed a large, sharp beak, a powerful neck and sharp talons. However, even with these attributes, the phorusrhacids are assumed to have preyed on smaller animals that could be dispatched with a minimum of struggle. This is due to the fact that with the phorusrhacids' beak proportions, the jaw could not generate a great deal of bite force with which to kill the prey. Although phorusrhacids could not generate a strong bite force with its beak, the bones of the beak were tightly fused together, making the beak more resilient to force from the front to back direction, thus, suggesting it could cause a great amount of harm through pecking. Generally speaking, it is thought that a terror bird would use its feet to injure prey by kicking it, and to hold the prey down and finish it off by pecking at it with its large beak. Larger prey may also have been attacked by pecking and kicking.[13]

All phorusrhacids are thought to have been carnivorous. The strong downwards curve from the tip of this beak suggests that it ripped the flesh from the body of other animals. Many extant bird species with this feature are carnivorous. CT scans performed on the skull of a phorusrhacid reveal that the species would not have been able to shake its prey side to side, but rather exert significant downward force.[14] The anatomy of the typical phorusrhacid skull shows that it can handle this form of stress the best. This downward force would have allowed the phorusrhacid to shatter bones more easily, stunning its prey and making it easier to swallow whole. Some researchers think that the phorusrhacids closest relative, the seriema, acts very much like a phorusrhacid would have; picking up the prey and throwing them down then picking at them. If the prey was too large to swallow whole, the curved tip of the beak allowed the bird to pick at the prey and rip apart flesh, all using its very strong neck structure. They may have also used their claws to tear apart carcasses as well as helping them tear flesh.[15] 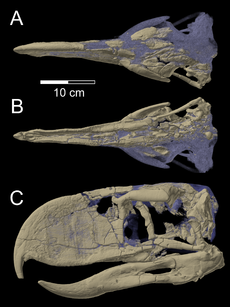 CT scan of the skull of P 14357, holotype of Andalgalornis ferox in the collections of the Field Museum of Natural History

These birds were thought in the past to have high beaks, round orbits, and vaulted braincases[18] though there was never enough empirical evidence to support this. However, new fossils have been discovered in Cormollo, Argentina. These skulls reveal that the terror bird has a triangular dorsal view, a rostrum that is hooked and more than half the length of the actual skull, and a more compact caudal portion. The external nares and antorbital fenestras (areas found in the nose) were found to be more square than triangular. These all contribute to a skull that is more rectangular in view rather than triangular.[19] The structure of the fossils also suggest that these birds may have been more swift than originally thought.[19]

A skull from a smaller subspecies of this bird was found recently as well. With this fossil, it was found that the internal structure of the beak is hollow and reinforced with thin-walled trabeculaa. There is also an absence of both zona flexoria palatina and zona flexoria arcus jugalis which are key features that relate to the evolution of cranial akinesis. This discovery of the skull allows for the establishment of primary osteological homologies which are useful in comparative anatomy, functional morphology, and phylogenetic studies.[20]

The etymology of the name Phorusrhacidae is based on the type genus Phorusrhacos. When first described by Florentino Ameghino in 1887, the etymology of Phorusrhacos was not given. Current thinking is that the name is derived from a combination of the Greek words "phoros", which means bearer or bearing, and "rhacos", which translates to wrinkles, scars or rents.[21] Researchers have compared Phorusrhacidae with the living families of Cariamidae and Sagittaridae, but their differences in body mass are too drastic, and thus, one cannot overly depend on these living families for answers.

Following the revision by Alvarenga and Höfling (2003), there are now 5 subfamilies, containing 14 genera and 18 species:[22] These species were the product of adaptive radiation.[23]

Alvarenga and Höfling did not include the Ameghinornithidae from Europe in the phorusrhacoids; these have meanwhile turned out to be more basal members of Cariamae.[27] Though traditionally considered as members of the Gruiformes, based on both morphological and genetic studies (the latter being based on the seriema[28]) that they may belong to a separate group of birds (the Cariamae) and their closest living relatives, according to the last nuclear studies, are a clade conformed by Falconidae, Psittaciformes and Passeriformes[29]