Pont-Audemer is a commune in the Eure department in the Haute-Normandie region in northern France.

The commune is situated on the river Risle, 13 km upstream from its outflow into the Seine. It lies on the border between the regions Roumois and Lieuvin .

The commune was spared substantial damage to its historic buildings during the Battle of Normandy. Nowadays the half-timbered buildings and the canals running between them are a tourist attraction. The church of Saint-Ouen is noted for its Renaissaince stained glass. 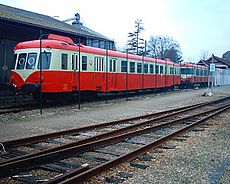 The X2426 at Pont-Audemer Station.

Pont-Audemer has a railway station, Gare de Pont-Audemer, but passenger services were ceased in 1969. The station is served by TER Haute-Normandie buses. PontAuRail, a heritage railway association, ran two Diesel multiple units (a X4500 and a X2400) from Pont-Audemer to Honfleur between 1995 and 2006.

Until 1926, Pont-Audemer was a sub-prefecture of the Eure department.

The city is evoked in a poem of Paul Verlaine called "The Apollo of Pont-Audemer."

Pont-Audemer is twinned with: