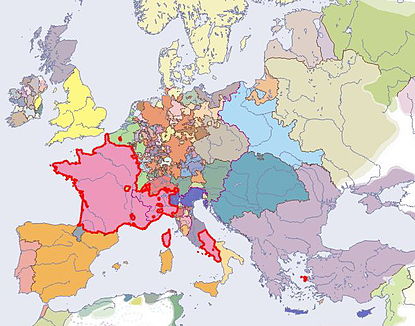 The Italian War of 1521–26, sometimes known as the Four Years' War, was a part of the Italian Wars. The war pitted Francis I of France and the Republic of Venice against the Holy Roman Emperor Charles V, Henry VIII of England, and the Papal States. The conflict arose from animosity over the election of Charles as Emperor in 1519–20 and from Pope Leo X's need to ally with Charles against Martin Luther.

The war broke out across Western Europe late in 1521 when the French invaded Navarre and the Low Countries. Imperial forces overcame the invasion and attacked northern France, where they were stopped in turn. The Pope, the Emperor, and Henry VIII then signed a formal alliance against France, and hostilities began on the Italian Peninsula. At the Battle of Bicocca, Imperial and Papal forces defeated the French, driving them from Lombardy. Following the battle, fighting again spilled onto French soil, while Venice made a separate peace. The English invaded France in 1523, while Charles de Bourbon, alienated by Francis's attempts to seize his inheritance, betrayed Francis and allied himself with the Emperor. A French attempt to regain Lombardy in 1524 failed and provided Bourbon with an opportunity to invade Provence at the head of a Spanish army.

Marie Antoinette baptised Maria Antonia Josepha Johanna (or Maria Antonia Josephina Johanna; 2 November 1755 – 16 October 1793) was an Archduchess of Austria from 1755 to 1770, a Dauphine of France from 1770 to 1774 and the Queen of France and of Navarre from 1774 to 1792. She was the fifteenth and penultimate child of Holy Roman Emperor Francis I and Empress Maria Theresa.

In April 1770, on the day of her marriage to Louis-Auguste, Dauphin of France, she became Dauphine of France. Marie Antoinette assumed the title of Queen of France and of Navarre when her husband, Louis XVI of France, ascended the throne upon the death of Louis XV in May 1774. After seven years of marriage, she gave birth to a daughter, Marie-Thérèse Charlotte, the first of four children.

Initially charmed by her personality and beauty, the French people generally came to dislike her, accusing "L'Autrichienne" (meaning the Austrian (woman) in French) of being profligate, promiscuous, and of harboring sympathies for France's enemies, particularly Austria, her country of origin. The Diamond Necklace incident further ruined her reputation. Although she was completely innocent in this affair, she became known as Madame Déficit.

The royal family's flight to Varennes had disastrous effects on French popular opinion, Louis XVI was deposed and the monarchy abolished on 21 September 1792; the royal family was subsequently imprisoned at the Temple Prison. Nine months after her husband's execution, Marie Antoinette was herself tried, convicted of treason, and executed by guillotine on 16 October 1793.

Even centuries after her death, Marie Antoinette is widely considered a major historical figure and a notable presence in popular culture, being the subject of multiple books, films and other forms of media. Some academics and scholars have deemed her frivolous and superficial, and have attributed the start of the French Revolution to her; however, others have claimed that she was treated unjustly and that views of her ought be more sympathetic. 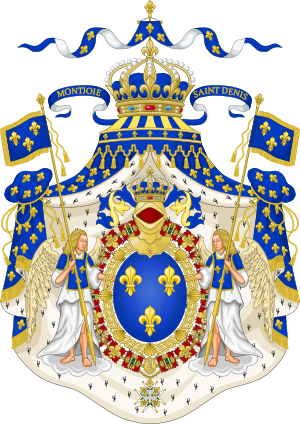 The Grand Royal Coat of Arms of France
More pictures... 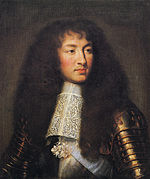 For most of the reign of Louis XIV (1643–1715), France was the dominant power in Europe, aided by the diplomacy of Richelieu's successor (1642–1661) Cardinal Mazarin. Cardinal Mazarin oversaw the creation of a French navy that rivaled England's, expanding it from 25 ships to almost 200. The size of the army was also considerably increased. Renewed war (the War of Devolution 1667-1668 and the Franco-Dutch War 1672-1678) brought further territorial gains (Artois and western Flanders and the free county of Burgundy, left to the Empire in 1482), but at the cost of the increasingly concerted opposition of rival powers, and a legacy of enormous national debt. An adherent of the theory of the divine right of kings, which advocates the divine origin and lack of temporal restraint of monarchical rule, Louis continued his predecessors' work of creating a centralized state governed from the capital. He sought to eliminate the remnants of feudalism persisting in parts of France and, by compelling the noble elite to inhabit his lavish Palace of Versailles, succeeded in pacifying the aristocracy, many members of which had participated in the Fronde rebellion during Louis' minority. 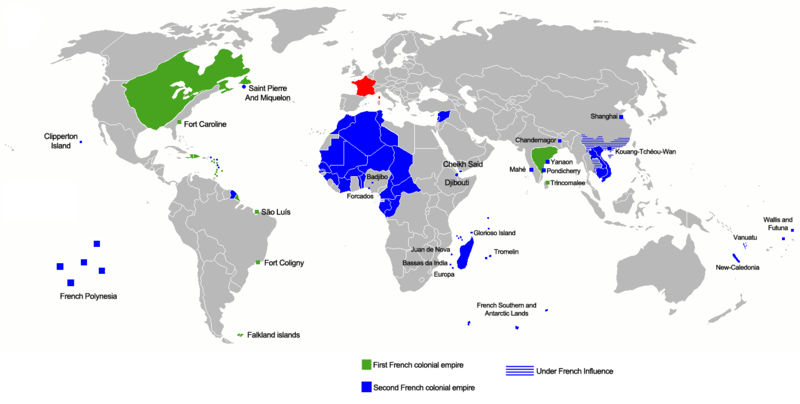 Extent of Kingdom of France (green)