Quantrill's Raiders was a loosely organized force of pro-Confederate partisan rangers, "bushwhackers", who fought in the American Civil War under the leadership of William Clarke Quantrill. The name "Quantrill's Raiders" seems to have been attached to them long after the war, when the veterans would hold reunions.

The Missouri-Kansas border area was fertile ground for the outbreak of guerrilla warfare when the Civil War erupted in 1861. Historian Albert Castel wrote:

For over six years, ever since Kansas was opened up as a territory by Stephen A. Douglas' Kansas-Nebraska Bill of 1854, its prairies had been the stage for an almost incessant series of political conventions, raids, massacres, pitched battles, and atrocities, all part of a fierce conflict between the Free State and proslavery forces that had come to Kansas to settle and to battle.[1]

In February 1861 Missouri voters elected delegates to a statewide convention, which rejected secession by a vote of 89-1. Unionists, led by regular U.S. Army commander Nathaniel Lyon and Frank Blair of the politically powerful Blair family, and increasingly pro-secessionist forces, led by governor Claiborne Jackson and future Confederate general Sterling Price, contested for the political and military control of the state. By June, there was open warfare between Union forces and troops supporting the Confederacy. Guerrilla warfare immediately erupted throughout the state and intensified in August after the Union defeat at the Battle of Wilson's Creek.[2]

By August 1862, with the Union victory at the Battle of Pea Ridge, the state was free of significant regular Confederate troops but the violence in Missouri continued. One historical work describes the situation in the state after Wilson's Creek:

Unlike other border areas in Maryland and Kentucky, local conflicts, bushwhacking, sniping, and guerrilla fighting marked this period of Missouri history. "When regular troops were absent, the improvised war often assumed a deadly guerrilla nature as local citizens took up arms spontaneously against their neighbors. This was a war of stealth and raid without a front, without formal organization, and with almost no division between the civilian and the warrior."[3]

The most notorious of these guerrilla forces was led by William Clarke Quantrill.

Quantrill was not the only Confederate guerrilla operating in Missouri, but he rapidly gained the greatest notoriety. He and his men ambushed Union patrols and supply convoys, seized the mail, and occasionally struck towns on either side of the Kansas-Missouri border. Reflecting the internecine nature of the guerrilla conflict in Missouri, Quantrill directed much of his effort against pro-Union civilians, attempting to drive them from the territory where he operated. Quantrill's guerrillas attacked Jayhawkers, Union militia, and U.S. forces relying primarily on ambush and raids.[4]

Under his direction, Confederate guerrillas perfected military tactics such as disguises, coordinated and synchronized attacks, planned dispersal after an attack using pre-planned routes and relays of horses, and technical methods, including the use of multiple .36 caliber Colt revolvers, for increased firepower and their improved accuracy over the .44 caliber.

Lawrence had historically been the base of operations for abolitionist and jayhawker organizations. During the period of border warfare (1855-1861), known as "Bleeding Kansas" in the press, and during the Civil War, irregular raids into Missouri by abolitionists, redlegs, and jayhawkers and Union soldiers, resulted in robberies, theft, arson, and the murder of citizens.

In August 1863, Union authorities assigned to the border were frustrated by the hit-and-run tactics of Quantrill's guerrillas and particularly the aid provided by Confederate sympathizers in Western Missouri. Authorities began imprisoning the female family members of the known guerrillas, with the intent of banishing them. These females, some teenagers, were jailed in Kansas City, Missouri, in George Caleb Bingham's house, on Grand Street. Alterations in an adjoining structure plus an extra story that had been added by Bingham resulted in the collapse of the structure. Several women were maimed and killed. The deaths of female non-combatants caused outrage among the guerrillas.

Calling for revenge, Quantrill organized a unified partisan raid on Lawrence. Coordinating across vast distances, small bands of partisans rode across 50 miles of open prairie to rendezvous on Mount Oread in the early morning hours before the raid. Quantrill's men burned a quarter of the town's buildings and killed at least 150 men and boys.[6]

One of the main targets of the raid, abolitionist U.S. Senator Jim Lane, escaped by fleeing into corn fields.[7] The Lawrence raid was the most deadly and infamous operation of Missouri's Confederate guerrillas.

The Confederate leadership was appalled by the raid and withdrew even tacit support from the "bushwhackers". Following the raid, in the winter of 1863-64, Quantrill led his men behind Confederate lines into Texas. There, their often lawless presence proved an embarrassment to the Confederate command.

Some Confederate officers appreciated the effectiveness of these irregulars against Union forces, which rarely gained the upper hand over them, especially Quantrill. Among these was General Joseph O. Shelby, who rode south into Mexico with his troops rather than surrender at the end of the war, and whose command was remembered as "The Undefeated". Their exploits are also immortalized in a later addition to the post-war ballad, "The Unreconstructed Rebel":

"I won't be reconstructed– I'm better now than then.
And for that Carpetbagger I do not care a damn.
So it's forward to the Frontier soon as I can go.
I'll fix me up a weapon and start for Mexico."[8]

Among Quantrill's men was a freed former slave man named John Noland. He was one of Quantrill's scouts, reputed to be his best one. Noland helped scouting Lawrence, Kansas, before the raid by Quantrill's men in 1863. He joined Quantrill's raiders because of the abuse his family suffered at the hands of Kansas jayhawkers. Post-war pictures show him sitting with comrades at reunions of the Raiders. In the 1999 movie Ride with the Devil, depicting a group of fictionalized Missouri bushwhackers similar to those of Quantrill's Raiders as well as the Lawrence raid, the character of Daniel Holt was representative of Quantrill's John Noland. 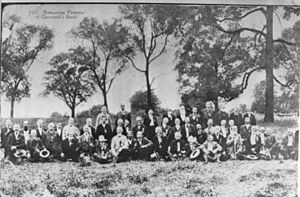 Reunion of Quantrill's Raiders. The first official reunion occurred in 1898, more than 30 years after Quantrill's death and the end of the Civil War.

During late winter 1863, Quantrill lost his hold over his men. In early 1864, the guerrillas he had led through the streets of Lawrence returned from Texas to Missouri in separate bands, none led by Quantrill himself.

Quantrill's guerrillas, as a group, did not maintain operations in winters along the border. Quantrill would lead his men to Tyler, Texas over-winter and offer his services to the Confederacy. Their assignments included attacking teamsters who supplied the Union, repelling Union & jayhawkers raids into Northern Texas, repelling native Indians and policing & rounding-up deserters, roaming in Texas & Oklahoma. The guerrillas were rowdy, undisciplined and dangerous. Quantrill lost his control of the men in the winter of 1863\64.

The men split into bands and were commanded by lieutenants, "Bloody" Bill Anderson and George Todd. These guerrillas returned to Missouri, while Quantrill took several of his loyal troops East towards Kentucky.

Quantrill's group of guerrillas that went to Kentucky were hunted & tracked by pro-Union soldiers and hired killers. His men were cornered in a barn in Kentucky. A shootout resulted in William Quantrill being injured in the spine, unable to move. He was arrested, but reportedly died a week later from his wounds.

William Anderson's splinter group of Quantrill's guerrillas was assigned to duty north of the Missouri River, during the General Sterling Price raid, in 1864. His duties included disrupting operations north of the Missouri river, drawing Union troops toward his cavalry command. Anderson was reportedly shot dead north of Orrick. His body was dragged through the streets of Richmond, Missouri. His grave marker is located in the old Mormon Pioneer cemetery, in the extreme SW corner, behind some pine trees, near the road.

George Todd's splinter group of Quantrill's guerrillas was attached to Major General Sterling Price's raid across Missouri, south of the Missouri River. He functioned as a cavalry scout and was shot out of his saddle by a Union sniper, north of Independence, Missouri a day before the Battle of Westport.

Some of the guerrillas continued under the leadership of Archie Clement, who kept the Raiders together after the war and harassed the state government of Missouri during the tumultuous year of 1866. In December 1866, state militiamen killed Clement in Lexington, but his men continued on as outlaws, emerging in time as the James-Younger Gang.

In the films True Grit, protagonist Rooster Cogburn (John Wayne in the original 1969 version and Jeff Bridges in the 2010 version) prides himself on being a part of Quantrill's Raiders during the Civil War while arguing with Texas Ranger LaBoeuf. He also has a cat named General Sterling Price after a famous Confederate General from Missouri. The movie The Outlaw Josey Wales is loosely based on Quantrill's Raiders. Ride with the Devil starring Tobey Maguire & Jewel also features Quantrill's Raiders and the Missouri-Kansas conflict. Audie Murphy's movie Arizona Raiders deals with Quantrill's Raiders and the period immediately after the Civil War. In the film Bandolero!, Mace Bishop (James Stewart) compares his riding with Sherman to his brother Dee Bishop's (Dean Martin) riding with Quantrill as "war versus meanness".