Rainbow (also known as Ritchie Blackmore's Rainbow or Blackmore's Rainbow) are a British rock band led by guitarist Ritchie Blackmore from 1975 to 1984 and 1993 to 1997. A limited number of European appearances have been announced by Blackmore for the summer of 2016. They were originally established with Ronnie James Dio's American rock band Elf, but after the first album, Blackmore fired the backing members and continued with Dio until 1979. Three British musicians joined in 1979, singer Graham Bonnet, keyboardist Don Airey, former Deep Purple bassist Roger Glover, and this line-up gave the band their commercial breakthrough with the single "Since You Been Gone". Over the years Rainbow went through many line-up changes with no two studio albums featuring the same line-up. Other lead singers Joe Lynn Turner and Doogie White would follow, and the project consisted of numerous backing musicians. The band's early work primarily featured mystical lyrics with a neoclassical metal style, but went in a more streamlined, commercial direction following Dio's departure from the group.[1]

Rainbow were ranked No. 90 on VH1's 100 Greatest Artists of Hard Rock.[2] The band has sold over 28 million albums worldwide.

By 1973, Blackmore had steered Deep Purple through a significant personnel change, with Ian Gillan and Roger Glover being replaced by David Coverdale and Glenn Hughes. However, the new members were keen to add new musical styles and Blackmore found his request to record the Steve Hammond-penned "Black Sheep of the Family" with "Sixteenth Century Greensleeves" turned down by the band.[3] He decided to record the song with Dio instead, using Dio's band Elf as additional musicians.[4] He enjoyed the results, and a full album, billed as Ritchie Blackmore's Rainbow was recorded between February and March 1975 at Musicland Studios in Munich, Germany.[5] The band name was inspired by the Rainbow Bar and Grill in Hollywood.[6]

Rainbow's music was partly inspired by classical music since Blackmore started playing cello to help him construct interesting chord progressions,[7][8] and Dio wrote lyrics about medieval themes. Dio possessed a versatile vocal range capable of singing both hard rock and lighter ballads, and, according to Blackmore, "I felt shivers down my spine."[9] Although Dio never played a musical instrument on any Rainbow album, he is credited with writing and arranging the music with Blackmore, in addition to writing all the lyrics himself.[5][10][11] Blackmore and Dio also found a common ground in their sense of humour.[12]

Following the positive experience of recording with Dio, Blackmore decided to leave Deep Purple, playing his last show in Paris in April.[3][13] The album had a positive critical reception and was a top 20 UK and top 30 US hit. Blackmore's departure from Deep Purple was publicly announced on 21 June.[14]

File:Rainbowonstage.jpg
Rainbow performing in Munich in 1977. The electric rainbow that spanned the stage used so much power, it frequently interfered with the guitars and amplifiers.[15]

Blackmore was unhappy about carrying the Elf line-up along for live performances, and so he fired everybody except Dio shortly after the album was recorded, due to Driscoll's style of drumming and the funky bass playing of Gruber.[16] Blackmore would continue to dictate personnel for the remainder of the band's lifetime, with drummer and former bandmate Ricky Munro remarking "he was very difficult to get on with because you never knew when he would turn around and say 'You're sacked'."[17] Blackmore recruited bassist Jimmy Bain, American keyboard player Tony Carey and drummer Cozy Powell, who had previously worked with Jeff Beck and had some solo success.[16] Powell also greatly appealed to Blackmore in their mutual fondness for practical jokes.[18]

This line-up also commenced the first world tour for the band, with the first date in Montreal on 10 November 1975. The centrepiece of the band's live performance was a computer-controlled rainbow including 3000 lightbulbs, which stretched 40 feet across the stage.[19] [18] A second album, Rising, was recorded in February at Musicland. By the time of the European dates in the summer of 1976, Rainbow's reputation as a blistering live act had been established. The band added Deep Purple's Mistreated to their setlist, and song lengths were stretched to include improvisation.[20] Carey recalls rehearsing the material was fairly straightforward, saying "We didn't work anything out, except the structure, the ending ... very free-form, really progressive rock."[21] The album art was designed by famed fantasy artist Ken Kelly, who had drawn Tarzan and Conan the Barbarian.[22][23]

In August 1976, following a gig at Newcastle City Hall, Blackmore decided to fire Carey, believing his playing style to be too complicated for the band. Unable to find a suitable replacement quickly, Carey was quickly reinstated,[24] but as the world tour progressed onto Japan, he found himself regularly being the recipient of Blackmore's pranks and humour.[25] Blackmore subsequently decided that Bain was substandard and fired him in January 1977. The same fate befell Carey shortly after. Blackmore, however, had difficulty finding replacements he liked. On keyboards, after auditioning several high profile artists, including Vanilla Fudge's Mark Stein, Procol Harum's Matthew Fisher and ex-Curved Air and Roxy Music man Eddie Jobson, Blackmore finally selected Canadian David Stone, from the little-known band Symphonic Slam. For a bass player, Blackmore originally chose Mark Clarke, formerly of Jon Hiseman's Colosseum, Uriah Heep and Tempest, but once in the studio for the next album, Long Live Rock 'n' Roll, Blackmore disliked Clarke's fingerstyle method of playing so much that he fired Clarke on the spot and played bass himself on all but four songs: the album's title track, "Gates of Babylon", "Kill the King", and "Sensitive to Light". Former Widowmaker bassist, Australian Bob Daisley was hired to record these tracks, completing the band's next line-up.

After the release and extensive world tour in 1977–78, Blackmore decided that he wanted to take the band in a new commercial direction away from the "sword and sorcery" theme.[26] Dio did not agree with this change and left Rainbow. 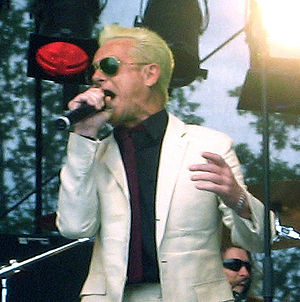 Blackmore asked Ian Gillan, also formerly of Deep Purple, to replace Dio, but Gillan turned him down. After a series of auditions, former singer/guitarist of The Marbles, Graham Bonnet was recruited. Powell stayed, but Daisley and Stone were both fired, the latter replaced by keyboardist Don Airey. At first the band auditioned bass players, but at Cozy Powell's suggestion Blackmore hired another former Deep Purple member, Roger Glover, as a producer, bassist and lyricist.[27] The first album from the new line-up, Down to Earth, featured the band's first major singles chart successes, "All Night Long" and the Russ Ballard-penned "Since You Been Gone". In 1980, the band headlined the inaugural Monsters of Rock festival at Castle Donington in England. However, this was Powell's last Rainbow gig: he had already given his notice to quit, disliking Blackmore's increasingly pop rock direction. Then Bonnet resigned to pursue a solo project. File:Joe Lynn Turner in 2008.jpg

For the next album, Bonnet and Powell were replaced by Americans Joe Lynn Turner and Bobby Rondinelli, respectively. The title track from Difficult to Cure was a version of Beethoven's Ninth Symphony. The album spawned their most successful UK single, "I Surrender" (another Ballard song), which reached No.3. After the supporting tour, Don Airey quit over musical differences and was replaced by David Rosenthal.

The band attained significant airplay on Album-oriented rock radio stations in the US with the track "Jealous Lover", reaching No. 13 on Billboard Magazine's Rock Tracks chart. Originally issued as the B-side to "Can't Happen Here", "Jealous Lover" subsequently became the title track to an EP issued in the US that featured very similar cover art to Difficult to Cure.

Rainbow's next full-length studio album was Straight Between the Eyes. The album was more cohesive than Difficult to Cure, and had more success in the United States. The band, however, was alienating some of its earlier fans with its more AOR sound.[1] The single "Stone Cold" was a ballad that had some chart success (#1 on Billboard's Rock Tracks chart) and its video received heavy airplay on MTV. The successful supporting tour skipped the UK completely and focused on the American market. A date in San Antonio, Texas, on this tour was filmed, and the resulting "Live Between the Eyes" also received repeated showings on MTV.

Bent Out of Shape saw drummer Rondinelli fired in favour of former Balance drummer Chuck Burgi. The album featured the single "Street of Dreams". Blackmore claims on his website that the song's video was banned by MTV for its supposedly controversial hypnotic video clip,[28] but Dr. Thomas Radecki of the National Coalition on Television Violence criticised MTV for airing the video, contradicting Blackmore's claim.[29] The resulting tour saw Rainbow return to the UK, and also to Japan in March 1984 where the band performed "Difficult to Cure" with a full orchestra. The concert was also filmed.

In 1988, after joining the band Impelliteri, Graham Bonnet covered "Since You Been Gone" on the group's debut album, Stand In Line.

In 1993 Blackmore left Deep Purple permanently due to "creative differences" with other members, and reformed Rainbow with all-new members featuring Scottish singer Doogie White. The band released Stranger in Us All in 1995, and embarked on a lengthy world tour.

The tour proved very successful, and a show in Germany was professionally filmed for the Rockpalast TV show. This show, initially heavily bootlegged (and considered by many collectors to be the best Rainbow bootleg of the era), was officially released by Eagle Records on CD and DVD as Black Masquerade in 2013.[30] The live shows featured frequent changes in set lists, and musical improvisations that proved popular with bootleggers and many shows are still traded over a decade later.

However, Blackmore turned his attention to his long-time musical passion, Renaissance and medieval music. Rainbow was put on hold once again after playing its final concert in Esbjerg, Denmark in 1997. Blackmore, together with his partner Candice Night as vocalist then formed the Renaissance-influenced Blackmore's Night. Around the same time as production of Stranger in Us All (1995), they were already gearing up their debut album Shadow of the Moon (1997).[31]

Many Rainbow songs have been performed live by former members of the band since the group's split in 1984 and then in 1997, particularly former frontmen Ronnie James Dio, Graham Bonnet and Joe Lynn Turner in recent years. Also, Don Airey often plays 1979-1981 era songs during his solo shows. Blackmore's Night occasionally performs one or two Rainbow songs live, namely "Ariel", "Rainbow Eyes" and "Street of Dreams". The latter two were also re-recorded by Blackmore's Night in studio.

In 2002–2004 the Hughes Turner Project played a number of Rainbow songs at their concerts. On 9 August 2007 Joe Lynn Turner and Graham Bonnet played a tribute to Rainbow show in Helsinki, Finland. The concert consisted of songs from the 1979-1983 era.

In 2009, Joe Lynn Turner, Bobby Rondinelli, Greg Smith and Tony Carey created the touring tribute band Over The Rainbow with Jürgen Blackmore (Ritchie's son) as the guitarist. Over The Rainbow performed songs from every era of the band's history. After the first tour Tony Carey had to leave the band due to health concerns; he was replaced by another former Rainbow member, Paul Morris.

In 2015, Blackmore announced that he would play four "all rock" concerts in the summer of 2016. Two shows have currently been confirmed in Germany under the banner of 'Ritchie Blackmore's Rainbow and Friends', with a further show at the Birmingham Genting Arena in England.[32] Later on November 6, the line up was revealed as Lords Of Black singer Ronnie Romero, Stratovarius keyboardist Jens Johansson, Blackmore’s Night drummer David Keith and bassist Bob Nouveau.[33][34]