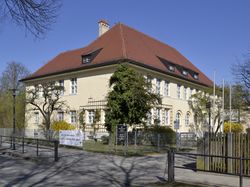 Realschule is a type of secondary school in Germany, Switzerland, Liechtenstein and Estonia. It has also existed in Croatia (realna gimnazija), Austria, Denmark and Norway (realskole), Sweden (realskola), Hungary (reáliskola), Slovenia (realka) and in the Russian Empire (реальное училище).

For Johann Joachim Becher, education also had a mandate to support the replacement of the Holy Roman Empire with a more republican commonwealth. His school would have had the task of creating education and teaching an organized state structure. His ideal was the artisan, the educated scholar, the universal scientist.

Situation of the school

In the German secondary school system, Realschule is ranked between Hauptschule (lowest) and Gymnasium (highest). After graduating from Realschule, good students are allowed to attend a professional Gymnasium or a general-education Gymnasium. They can also attend a Berufskolleg or do an apprenticeship.

In most states of Germany, pupils start at Realschule at the age of ten or eleven and typically finish school at the age of 16–17. In some states, Realschulen have recently been replaced by Oberschulen or Sekundarschulen. In 2006 1.32 million German students attended a Realschule.

At Realschule, a pupil gets an extended education and learns at least one foreign language, usually English. In the state of Baden-Württemberg, after the sixth grade, the pupil has to choose among technology, home economics, and a second foreign language, usually French. The new subject becomes the pupil's fifth main subject, after German, maths, science and English; and it is also possible to learn other foreign languages in free workshops. Other subjects are geography, social sciences, economics, history, religious education, and physical education. After the 8th grade a pupil has to choose between arts and music.

Gymnasia and Realgymnasia are the classical higher or secondary schools of Germany.

Abolition of the Realschule in Berlin and Hamburg

Starting in 2010/2011, Realschulen were formally abolished in Berlin and merged with Hauptschulen and the old Gesamtschulen to form a new type of comprehensive school, called Stadtteilschule in Hamburg and Sekundarschule in Berlin.[4]

Performance of students attending the Realschule

The German tripartite system of education has been widely criticized for separating children along class lines at a very early age. For instance, in some German states, a decision is made in the sixth or even the fourth grade about whether a child is to continue in the Gymnasium, the Realschule, or the Hauptschule. Only the Gymnasium is a university-preparatory school, so critics argue essentially a decision is made as early as the fourth grade about whether a child will be allowed to attend college.[6]

The system is considered so onerous outside Germany that the OECD even sent a special envoy[7] to Germany to condemn current German practice.[8] Specifically, the Brazilian expert found that German schools basically separate children according to social class, with children of academics and professionals more often being sent on to a Gymnasium, and working-class children being sent to a Realschule or a Hauptschule.

According to critics, the system is widely considered within Germany[9] to be socially useful in the sense that the upper class is able to reserve the best schools for itself without having to resort to private schools. Finally, no democratic society outside the German-speaking world has tripartite school systems that separate children largely according to background; indeed, this finding was the main complaint about Germany in the recent PISA study.[10]

Proponents of the tripartite system consider the arguments brought forward by the critics to be invalid. They point to the fact that not only Gymnasium, but also comprehensive schools and schools serving mature students such as the Kolleg or the Berufsoberschule offer the possibility for the Abitur. Also it is possible to attend college without holding the Abitur. They also hold the opinion that state-funded Realschulen and Gymnasiums offered many working-class children the possibility to move up the social ladder. Also, proponents of the tripartite system fear the abolishing Gymnasia and Realschulen will lead to the growth of a private school sector.

Proponents of the Realschule also hold the opinion that it aids students' personality development.[11] According to a study those attending a Realschule became more altruistic and more likely to care for others over time.[12]

The "Advanced Realschule" and "Realschule Plus"

The realskole existed in Norway between 1935 and 1970. It replaced the former middelskole, and was the level between folkeskole (primary school) and gymnasium. The majority historically left school after folkeskole, and the realskole was meant as preparation for the gymnasium, itself a preparation for university studies. Only a small minority attended gymnasium in those times.