The River Tees (/tiːz/) is in northern England. It rises on the eastern slope of Cross Fell in the North Pennines, and flows eastwards for 85 miles (137 km) to reach the North Sea between Hartlepool and Redcar near Middlesbrough.[1]

The river drains 710 square miles (1834 km2) and has a number of tributaries including the River Greta, River Lune, River Balder, River Leven and River Skerne.[2] Before the reorganisation of the historic English counties, the river formed the boundary between County Durham and Yorkshire. In its lower reaches it now forms the boundary between the ceremonial counties of County Durham and North Yorkshire, while in the highest part of its course it forms the boundary between the historic counties of Westmorland and Durham. The head of the valley, whose upper portion is known as Teesdale, has a desolate grandeur, surrounded by moorland and hills, some exceeding 2,500 feet (762 m). This area is part of the North Pennine Area of Outstanding Natural Beauty.[3]

The source of the river at Teeshead just below Cross Fell lies at an elevation of approximately 2,401 feet (732 m). It flows east-north-east through an area of shake holes through Carboniferous Limestone. Below Viewing Hill, it turns south to the Cow Green Reservoir constructed to store water to be released in dry conditions to satisfy the industrial need for water on Teesside.[3][4]

Emerging from the reservoir at Cauldron Snout the river traverses a series of hard black basalt and dolerite rocks that intrude through the softer limestone,[5] in a succession of falls or rapids. From this point downstream the Tees forms the boundary between the traditional counties of Durham and Yorkshire almost without a break, although since 1974 much of it lies wholly in Durham. The dale widens below Cauldron Snout, and trees appear, contrasting with the broken rocks where the water descends over High Force. After a short turn northwards, the river continues to meander south-easterly. Close to where the B6277 road begins to run parallel to the river is the 30 metres (98 ft) High Force waterfall. About 1.5 miles (2.4 km) downstream is the smaller Low Force waterfall.[3] 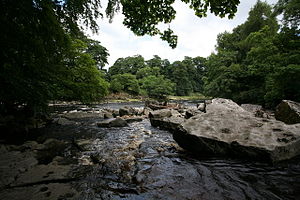 The confluence of the River Greta and the River Tees

The scenery becomes gentler and more picturesque as the river descends past Middleton-in-Teesdale (Durham). This locality has lead and ironstone resources. Just to the east of Middleton-in-Teesdale, the River Lune joins the Tees. After passing the village of Romaldkirk to the west, the river is joined by the River Balder at Cotherstone. The ancient town of Barnard Castle, Egglestone Abbey, and Rokeby Park, well known through Sir Walter Scott's poem, are all passed. At Rokeby the Tees is joined by the River Greta. From the area near Eggleston, the river is crossing over millstone grit.[6] From here the valley begins to open out, and traverses the rich plain east and south of Darlington in large meandering curves.[3]

The course of the valley down to here has been generally east-south-east, but it now turns north-east near the village of Whorlton. Passing Ovington and Winston it runs parallel to the A67 south-east past Gainford and Piercebridge to Darlington, passing under the A1 and A66. The section from Piercebridge to Hurworth flows over magnesian limestone.[6] It is at Croft-on-Tees that the River Skerne joins the Tees. The river now flows south past Croft-on-Tees before swinging northwards past Hurworth-on-Tees. A series of large meanders takes the course past Neasham, Low Dinsdale and Sockburn to Middleton St George.[3] In the lower reaches of the river valley the water flows over bunter sandstone and pebble beds.[6]

Just past Yarm, the River Leven joins the Tees, before passing the settlements of Eaglescliffe, Ingleby Barwick and Thornaby-on-Tees. Now nearing the sea, the Tees becomes an important commercial waterway, with the ports of Stockton-on-Tees and Middlesbrough on its banks. It passes through the Tees Barrage between these ports, turning tidal downstream from the barrage.[3]

Teesport is built on reclaimed land on the south side of the Tees estuary below Middlesbrough. 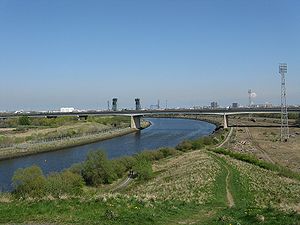 The River Tees (Portrack Cut) passing through the Green-Blue Heart of the Tees Corridor between Middlesbrough and Stockton District.

In the early 19th century the river was straightened, thus saving time and money in navigation. Between Stockton-on-Tees and Middlesbrough, the river previously meandered first south and then north of its current channel. Two "cuts", known as the Mandale Cut and the Portrack Cut, were made to straighten its course. Before these cuts were made, the journey by sailing barge from Thornaby to Middlesbrough, allowing for tides and other factors, could take as long as the journey from the mouth of the Tees to London.[citation needed] The Mandale Cut was the shorter of the two, at about 220 yards (200 m), with the Portrack Cut being considerably longer, although the northern meander it removed was smaller than the southern meander. Neither meander is visible today, except for the flow of Stainsby Beck into a waterway which is marked on maps first as "The Fleet" and then "Old River Tees". The current Tees Barrage is close to the site of the Mandale Cut.[9]

Since the cuts were made, the river has continued to undergo alterations to its bed and banks to make it deeper and more navigable. The channel has been made considerably narrower by dumping ship's ballast and ironworks slag along the former banks, increasing the scouring due to its natural flow. Maps made prior to 1900[10] show that between Stockton and Middlesbrough the river flowed in a channel up to 330 yards (300 m) wide in places, with many shoals and sandbars. The modern channel varies between about 110 yards (100 m) and 220 yards (200 m).

Industrialisation of the River Tees

The River Tees has been used for transporting industrial goods since the Industrial Revolution, particularly for the shipment of coal form the Durham Coalfields and also for the steel industries that later developed around Middlesbrough. In the early years merchant ships left the River Tees after loading in Yarm and Stockton on Tees; but as merchant ships became bigger, these smaller docks were suprseded by bigger and deeper docks in Middlesbrough, and later even further downstream at Teesport close to the mouth of the River Tees. In the 20th century the river also became important to the developing chemical industry, contributing particularly to the development of Imperial Chemical Industries (ICI).

The move to loading coal on bigger ships in Middlesbrough was the economic driver for the development not only of the town of Middlesbrough itself but also of the railway between Stockton and Darlington. This is where George Stephenson developed his railway engine "Locomotion" and this railway was the first steam railway to carry passengers, as well as industrial materials. The Stockton and Darlington Railway was founded after an initial shareholders' meeting in a room in a public house in Yarm on Tees.

Today Teesport is owned by PD Ports; it is located 5.6 miles (9 km) from the North Sea and 3.1 miles (5 km) east of Middlesbrough, on the River Tees. Teesport is currently the third largest port in the United Kingdom, and among the ten biggest in Western Europe, handling over 56 million tonnes of domestic and international cargo per year. The vast majority of these products are still related to the steel and chemical industries made by companies that are members of the Northeast of England Process Industry Cluster (NEPIC). The areas where large scale commodity chemical industry continues to be based are Billingham and Seal Sands, both on the north bank of the River Tees, and Wilton on the south bank. Steel manufacturing continues[citation needed] in Europe's largest blast furnace on the south bank in Redcar.

Other industrial companies that use the River Tees are manufacturing and servicing the North Sea oil and gas industry as well as the new and renewable energy sector, including offshore wind turbines. Indeed, the south bank of the mouth of the River Tees now has a substantial installation called the Teesside Offshore Wind Farm.[11] One of Europe's biggest dry docks is also near the mouth of the River Tees. This dock is used to service North Sea oil rigs and also to break them up at the end of their useful life. These dry docks are used to safely break up redundant ships in an environmentally secure manner. The American Second World War battleships, that became known as the "ghost ships",[12] were safely broken up here. Between 2003 and 2011 four of these American naval vessels and the 32,000-tonne former French aircraft carrier Clemenceau were decommissioned on the south bank of the Tees. The dismantling of the Clemenceau, also known as the Q790, was the largest project of its kind undertaken in Europe.

The River Tees was featured in the television series Seven Natural Wonders as one of the wonders of the North, and in the post-apocalyptic drama The Last Train having blown its banks.