From Infogalactic: the planetary knowledge core
Jump to: navigation, search
"Supper at Emmaus" redirects here. For other uses, see Supper at Emmaus (disambiguation). 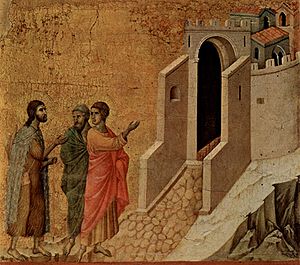 Jesus and the two disciples On the Road to Emmaus, by Duccio, 1308-1311, Museo dell'Opera del Duomo, Siena.

The Road to Emmaus appearance is one of the early resurrection appearances of Jesus after his crucifixion and the discovery of the empty tomb.[1][2][3] Both the Meeting on the road to Emmaus and the subsequent Supper at Emmaus, depicting the meal that Jesus had with two disciples after the encounter on the road, have been popular subjects in art. 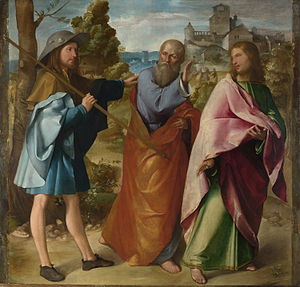 Altobello Melone - The Road to Emmaus

The Gospel of Luke 24:13-32 describes the encounter on the road and the supper at Emmaus, and states that a disciple named Cleopas was walking towards Emmaus with another disciple when they met Jesus. They did not recognize him, and discussed their sadness at recent events with him. They persuaded him to come and eat with them, and in the course of the meal they recognized him.

The Gospel of Mark 16:12-13 has a similar account that describes the appearance of Jesus to two disciples while they were walking in the country, at about the same time in the Gospel narrative,[4] although it does not name the disciples or the destination as Emmaus:

Afterward Jesus appeared in a different form to two of them while they were walking in the country. These returned and reported it to the rest; but they did not believe them either.[5]

The Gospel of Luke states that Jesus stayed and had supper with the two disciples after the encounter on the road:

As they approached the village to which they were going, Jesus acted as if he were going farther. But they urged him strongly, "Stay with us, for it is nearly evening; the day is almost over." So he went in to stay with them. [6]

The detailed narration of this episode is considered by some as one of the best sketches of a biblical scene in the Gospel of Luke.[7] In this account, Jesus appears to Cleopas and one other disciple, but "their eyes were holden" at first so that they could not recognize him. Later "in the breaking of bread", "their eyes were opened" and they recognized him. B. P. Robinson argues that this means that the recognition occurred in the course of the meal,[8] but Raymond Blacketer notes that "many, perhaps even most, commentators, ancient and modern and in-between, have seen the revelation of Jesus' identity in the breaking of bread as having some kind of eucharistic referent or implication."[9] 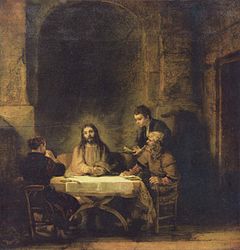 Christ at Emmaus by Rembrandt, 1648, Louvre.

Both the encounter on the road and the ensuing supper have been depicted in art, but the supper has received more attention. Medieval art tends to show a moment before Jesus is recognized; Christ wears a large floppy hat to help explain the initial lack of recognition by the disciples. This is often a large pilgrim's hat with badges or, rarely, a Jewish hat. However, the depiction of the supper has been a more popular theme, at least since the Renaissance, showing Jesus eating with the disciples. Often the moment of recognition is shown.

Rembrandt's 1648 depiction of the Supper builds on the etching that he did six years earlier, in which the disciple on the left had risen, hands clasped in prayer. In both depictions, the disciples are startled and in awe but not in fear. The servant is oblivious to the theophanic moment taking place during the supper.[10]

Caravaggio's painting in London and his painting in Milan were six years apart, and both imitate natural color very well, but both were criticized for lack of decorum. Caravaggio depicted Jesus without a beard, and the London painting shows fruits on the table that are out of season. Moreover, the inn keeper is shown serving with a hat.[11]

In literary art, the Emmaus theme is treated as early as the 12th century by Durham poet Laurentius in a semidramatic Latin poem.[12]

Carl Jung regarded the road to Emmaus appearance as an instance of the mythological theme of the magical traveling companion that still appears spontaneously in dreams today.[13]