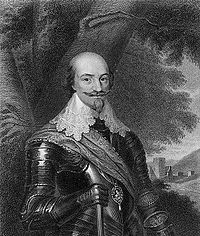 The Earl of Lindsey.

Robert Bertie was the son of Peregrine Bertie, 13th Baron Willoughby de Eresby (b. 12 October 1555, d. 25 June 1601) and Mary de Vere, daughter of John de Vere, 16th Earl of Oxford, and Marjory Golding. Queen Elizabeth I was his godmother, and two of her favourite earls, whose Christian name he bore, were his godfathers. He had been in her Essex's expedition to Cambridge, and had afterwards served in the Netherlands, under Maurice of Nassau, Prince of Orange. The long Continental wars throughout the peaceful reign of King James I had been treated by the English nobility as schools of arms, as a few campaigns were considered a graceful finish to a gentleman's education.

He was created Earl of Lindsey in 1626 and took his title from the northern of the three parts of Lincolnshire, the old Kingdom of Lindsey.

The Lindsey Level in The Fens, between the River Glen and The Haven, at Boston, Lincolnshire was named after the first Earl Lindsey as he was the principal adventurer in its drainage. The drainage work was declared complete in 1638 but the project was neglected with the onset of the Civil War so that the land fell back into its old state. When it was drained again, more than a hundred years later, it was called the Black Sluice Level. There is more information under the article Twenty, Lincolnshire.

As soon as Lord Lindsey had begun to fear that the disputes between the King and Parliament must end in war, he had begun to exercise and train his tenantry in Lincolnshire and Northamptonshire, of whom he had formed a regiment of infantry.

With him was his son Montagu Bertie, Lord Willoughby who had seen some service against the Spaniards in the Netherlands, and after his return had been made a captain in the Lifeguards, and a Gentleman of the Bedchamber. Anthony van Dyck has left portraits of the father and the son; the one a bald-headed, alert, precise-looking old warrior, with the cuirass and gauntlets of earlier warfare; the other, the very model of a cavalier, tall, easy, and graceful, with a gentle reflective face, and wearing the long lovelocks and deep-point lace collar and cuffs characteristic of Queen Henrietta's Court.

As Lord Lindsey was a most experienced soldier of 60 years of age at the start of the English Civil War, King Charles I had appointed him General-in-chief of the Royalists for the Battle of Edgehill. However, the King had imprudently exempted the cavalry from Lindsey's command, its general, Prince Rupert of the Rhine, taking orders only from the King. Rupert was only twenty three, and although an experienced soldier who had fought in the Thirty Years' War, he had not yet learnt that cavalry should also be used in support of infantry and not just against the enemy's cavalry.

At eight o'clock, on the morning of 23 October 1642 King Charles was riding along the ridge of Edge Hill, and looking down into the Vale of the Red Horse, a fair meadow land, here and there broken by hedges and copses. His troops were mustering around him, and in the valley he could see with his telescope the various Parliamentary regiments, as they poured out of the town of Kineton, and took up their positions in three lines. "I never saw the rebels in a body before," he said, as he gazed sadly at the subjects arrayed against him. "I shall give them battle. God, and the prayers of good men to Him, assist the justice of my cause." The whole of his forces, about 11,000 in number, were not assembled till two o'clock in the afternoon, for the gentlemen who had become officers found it no easy matter to call their farmers and retainers together, and marshal them into any sort of order. But while one troop after another came tramping, clanking, and shouting in, trying to find and take their proper place, there were hot words round the royal standard.

Lord Lindsey, who was an old comrade of Robert Devereux, Earl of Essex, the commander of the Parliamentarian forces, knew that he would follow the tactics they had both together studied in Holland, little thinking that one day they should be arrayed one against the other in their own native England. He had a high opinion of Essex's generalship, and insisted that the situation of the Royal army required the utmost caution. Rupert, on the other hand, had seen the swift fiery charges of the fierce troopers of the Thirty Years' war, and was backed up by Patrick Ruthven, Lord Ruthven, one of the many Scots who had won honour under King Gustavus Adolphus of Sweden. A sudden charge of the Royal horse would, Rupert argued, sweep the Roundheads from the field, and the foot would have nothing to do but to follow up the victory. The great portrait at Windsor shows us exactly how the King must have stood, with his charger by his side, and his grave, melancholy face, sad enough at having to fight at all with his subjects, and never having seen a battle, entirely bewildered between the ardent words of his spirited nephew and the grave replies of the well-seasoned old Earl. At last, as time went on, and some decision was necessary, the perplexed King, willing at least not to irritate Rupert, desired that Ruthven should array the troops in the Swedish fashion.

It was a greater affront to the General-in-chief than the king was likely to understand, but it could not shake the old soldier's loyalty. He gravely resigned the empty title of General, which only made confusion worse confounded, and rode away to act as colonel of his own Lincoln regiment, pitying his master's perplexity, and resolved that no private pique should hinder him from doing his duty. His regiment was of foot soldiers, and was just opposite to the standard of the Earl of Essex.

In the afternoon the Royal forces marched down the hill. It was at this time that Sir Jacob Astley prayed "O Lord, Thou knowest how busy I must be this day; if I forget Thee, do not Thou forget me;" then, rising, he said, "March on, boys." And, amid prayer and exhortation, the other side awaited the shock, as men whom a strong and deeply embittered sense of wrong had roused to take up arms. Prince Rupert's charge was fully successful. No one even waited to cross swords with his troopers, but all the Roundhead horse galloped headlong off the field, hotly pursued by the Royalists. But the main body of the army stood firm, and for some time the battle was nearly equal, until a large troop of the enemy's cavalry who had been kept in reserve, wheeled round and fell upon the Royal forces just when their scanty supply of ammunition was exhausted. Step by step, however, they retreated bravely, and Rupert, who had returned from his charge, sought in vain to collect his scattered troopers, so as to fall again on the rebels. Some were plundering, some chasing the enemy, and none could be got together.

His death at Edge Hill

Lord Lindsey was shot through the thigh bone, and fell. He was instantly surrounded by the rebels on horseback; but his son, Lord Willoughby, seeing his danger, flung himself alone among the enemy, and forcing his way forward, raised his father in his arms thinking of nothing else, and unheeding his own peril. The throng of enemy around called to him to surrender, and, hastily giving up his sword, he carried the Earl into the nearest shed, and laid him on a heap of straw, vainly striving to staunch the blood.

It was a bitterly cold night, and the frosty wind came howling through the darkness. Whether the battle were won or lost, the father and son knew not, and the guard who watched them knew as little. Lord Lindsey himself murmured, "If it please God I should survive, I never will fight in the same field with boys again!"–no doubt deeming that young Rupert had wrought all the mischief. His thoughts were all on the cause, his son's all on him. It proved impossible to stop his wounds bleeding and gradually the old man's strength ebbed away.

Toward midnight the Earl's old comrade Essex had time to understand his condition, and sent some officers to enquire for him, and promise speedy surgical attendance. Lindsey was still full of spirit, and spoke to them so strongly of their broken faith, and of the sin of disloyalty and rebellion, that they slunk away one by one out of the hut, and dissuaded Essex from coming himself to see his old friend, as he had intended. The surgeon, however, arrived, but too late, Lindsey was already so much exhausted by cold and loss of blood, that he died early in the morning of the 24 October 1642. His son, despite King Charles' best efforts to obtain his exchange, remained a prisoner of the Parliamentary side for about a year.

Lord Lindsey should not be confused with Ludovic Lindsay, 16th Earl of Crawford who also fought for the King at the Battle of Edgehill.

The office of Lord Great Chamberlain descended through to him following the death of his cousin Henry de Vere, 18th Earl of Oxford, as being the closest heir male.