From Infogalactic: the planetary knowledge core
Jump to: navigation, search
Not to be confused with the Lord Chamberlain.

In the United Kingdom, the Lord Great Chamberlain is the sixth of the Great Officers of State (not to be confused with the Great Offices of State), ranking beneath the Lord Privy Seal and above the Lord High Constable. The Lord Great Chamberlain has charge over the Palace of Westminster (though since the 1960s his personal authority has been limited to the royal apartments and Westminster Hall). The Lord Great Chamberlain also has a major part to play in royal coronations, having the right to dress the monarch on coronation day and to serve the monarch water before and after the coronation banquet, and also being involved in investing the monarch with the insignia of rule[citation needed]. He wears a distinctive scarlet court uniform and bears a gold key and a white stave as the insignia of his office. 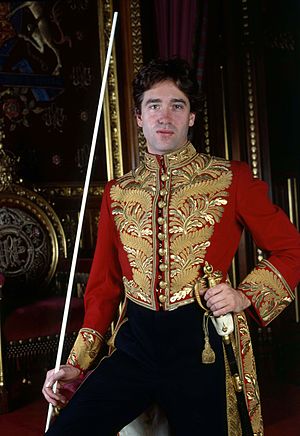 The 7th Marquess of Cholmondeley wearing the court uniform of the Lord Great Chamberlain.

The office was originally held by Robert Malet, a son of one of the leading companions of William the Conqueror. In 1133, however, King Henry I declared Malet's estates and titles forfeit, and awarded the office of Lord Great Chamberlain to Aubrey de Vere, whose son was created Earl of Oxford. Thereafter, the Earls of Oxford held the title almost continuously until 1526, with a few intermissions due to the forfeiture of some Earls for treason. In 1526, however, the fourteenth Earl of Oxford died, leaving his aunts as his heirs. The earldom was inherited by a more distant heir-male, his second cousin. The Sovereign then decreed that the office belonged to The Crown, and was not transmitted along with the earldom. The Sovereign appointed the fifteenth Earl to the office, but the appointment was deemed for life and was not heritable. The family's association with the office was interrupted in 1540, when the fifteenth earl died and Thomas Cromwell, the King's chief adviser, was appointed Lord Great Chamberlain.[1] After Cromwell's attainder and execution later the same year, the office passed through a few more court figures, until 1553, when it was passed back to the De Vere family, the sixteenth Earl of Oxford, again as an uninheritable life appointment.[2] Later, Queen Mary I ruled that the Earls of Oxford were indeed entitled to the office of Lord Great Chamberlain on an hereditary basis.

Thus, the sixteenth, seventeenth and eighteenth Earls of Oxford held the position on a hereditary basis until 1626, when the eighteenth Earl died, again leaving a distant relative as heir male, but a closer one as a female heir. The House of Lords eventually ruled that the office belonged to the heir male, Robert Bertie, 14th Baron Willoughby de Eresby, who later became Earl of Lindsey. The office remained vested in the Earls of Lindsey, who later became Dukes of Ancaster and Kesteven. In 1779, however, the fourth Duke of Ancaster and Kesteven died, leaving two sisters as female heirs, and an uncle as an heir male. The uncle became the fifth and last Duke, but the House of Lords ruled that the two sisters were jointly Lord Great Chamberlain and could appoint a Deputy to fulfil the functions of the office. The barony of Willoughby de Eresby went into abeyance between the two sisters, but the Sovereign terminated the abeyance and granted the title to the elder sister, Priscilla Bertie, 21st Baroness Willoughby de Eresby. The younger sister later married the first Marquess of Cholmondeley. The office of Lord Great Chamberlain, however, was divided between Priscilla and her younger sister Georgiana. Priscilla's share was eventually split between two of her granddaughters, and has been split several more times since then. By contrast, Georgiana's share has been inherited by a single male heir each time; that individual has in each case been the Marquess of Cholmondeley, a title created for Georgiana's husband.

The fractions show the holder's share in the office, and the date they held it. The current (as of 2015[update]) holders of the office are shown in bold face.

The rotation switches to the next person in line or his or her representative at the death of each monarch.