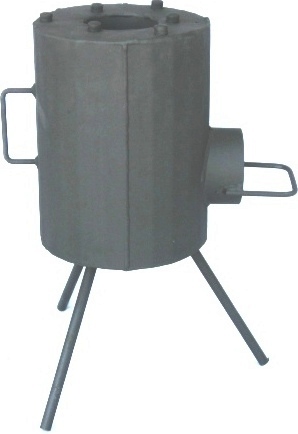 A rocket stove is an efficient cooking stove using small diameter wood fuel which is burned in a simple combustion chamber containing a vertical chimney, which ensures almost complete combustion prior to the flames reaching the cooking surface. It uses the same principle as the Dakota fire pit.

The principles were described by Dr. Larry Winiarski from Aprovecho in 1982 and stoves based on this design won Ashden Awards in both 2005 and 2006. Interest in rocket stoves has led to the development of rocket mass heaters and other innovations.

A rocket stove achieves efficient combustion of the fuel at a high temperature by ensuring a good air draft into the fire, controlled use of fuel, complete combustion of volatiles, and efficient use of the resultant heat. It has been used for cooking purposes in many energy poor locales (notably Rwandan refugee camps) as well as for space and water heating.

A rocket stove's main components are:

The fuel magazine can be horizontal, with additional fuel added manually, or vertical, with fuel gravity fed. As the fuel burns in the combustion chamber, convection draws new air into the combustion chamber from below, ensuring that any smoke from smoldering wood near the fire is also drawn into the fire and up the chimney. The chimney can be insulated to increase the temperature and improve combustion; according to studies,this can increase efficiency by up to two percent. In a rocket mass heater, the heat is passed to a heat exchanger to ensure the efficient use of the generated heat.

For cooking purposes, the design keeps the cooking vessel in contact with the fire over the largest possible surface area. A pot skirt can be used to create a narrow channel that forces hot air and gas to flow along the bottom and sides of the cooking vessel. Optional baffles guide hot air and flame up the sides of the pot. For space heating purposes, the heat is transferred to a heat store which can, in some cases, be part of the structure of the house itself. The exhaust gases then pass out of the building via the chimney.

The design of the rocket stove allows it to operate on about half as much fuel as a traditional open fire, and it can use smaller-diameter wood. If the stove is insulated and raised from the floor, the danger of children burning themselves is reduced. Some more recently designed rocket stoves are self-feeding, using gravity to add fuel to the fire as required.

There have been a number of new cook stove designs based on the original rocket stove. Many are being developed with alternative fuel options, such as solar powered cook stoves.[1] Designing stoves that generate electricity is another emerging trend. InStove is currently an organization that utilizes the rocket stove design to provide efficient cook stoves to developing countries.

A precursor to the rocket stove was the Argand lamp, which was patented in 1780. This was a major development of the traditional oil lamp, which introduced a glass chimney above the flame to increase air-flow. As well as being used for lighting, this design was also used for cooking and heating water due to its "affording much the strongest heat without smoke".[2]

Dr. Larry Winiarski, Technical Director of Aprovecho, began developing the Rocket Stove in 1980 based on a VITA stove, designed by Sam Baldwin,and re discovered the principles of the systems developed by the Romans in hypocaust heating and cooking systems.[3][4] TWP and AHDESA were winners at the Ashden Awards for Sustainable Energy in 2005 in the "Health and Welfare" category for their work in Honduras with the "Justa Stove", based on principles of the rocket stove.[5] Aprovecho were winners of the Special Africa Award at the Ashden Awards in 2006 for their work with rocket stoves for institutional cooking in Lesotho, Malawi, Uganda, Mozambique, Tanzania and Zambia.[6]

The rocket stove was originally developed for cooking, where a relatively small amount of continuous heat is applied to the bottom and sides of a cooking pot. Stoves can be constructed from brick, recycled steel cans, or steel sheet metal, or can be purchased.

Although rocket stoves are found more commonly in less developed countries where wood fuel sources are more scarce, they have seen in recent years increased use in developed countries, such as the United States. Some are small for portability, with insulation inside a double-walled design and a chamber for partial biomass gasification and additional mixing to increase heat production and to provide a cleaner, more complete burn. The advantage of rocket stoves is the very little fuel they need, such as wood and dry weeds, to be able to cook a whole meal with it, keeping the air cleaner with less hydrocarbons and carbon monoxide.

The rocket mass heater uses the rocket stove principle within a system designed to both heat air directly and also to transfer much of the heat from the flue gases into a thermal energy storage, often made of cob.[7] Described in detail in 2006, these heaters are becoming popular with DIY builders, in natural buildings and within permaculture systems.[8]

Rocket stoves can be used to heat water via a heat exchanger which transfers heat to a body of water in a nearby container.[9]