The 1,524 mm (5 ft) broad gauge Salekhard–Igarka Railway, (Трансполярная магистраль, Transpolyarnaya Magistral - "Transpolar Mainline") also referred to variously as Мёртвая дорога (Dead Road), and Stalinbahn, is an incomplete railway in northern Siberia. The railway was a project of the Soviet Gulag system that took place from 1947 to 1953. Construction was coordinated via two separate Gulag projects, the 501 Railroad beginning on the River Ob and 503 Railroad beginning on the River Yenisey, part of a grand design of Joseph Stalin to span a railroad across northern Siberia to reach the Soviet Union's easternmost territories.[1][2]

The planned route from Igarka to Salekhard measured 806 miles (1,297 km) in length. The project was built mostly with prisoner labour, particularly that of political prisoners,[3] and thousands perished.[3][4]

A rebuilt section of the railway between Novy Urengoy and Stary Nadym on the east bank of the Nadym River is still in operation, as is the extreme western section connecting Labytnangi and the railway to Vorkuta. The section from Salekhard and Nadym is planned to be rebuilt,[5] including a new bridge over the Ob to connect Salekhard to the rest of the Russian railway system via Labytnangi.[6]

The purpose of the railway was threefold: to facilitate export of nickel from neighbouring Norilsk; to provide work for thousands of post-war prisoners; and to connect the deep-water seaports of Igarka and Salekhard with the western Russian railway network. With Soviet industry relocated to western Siberia during World War II, it was seen as a strategic advantage to use the northward-flowing river systems to deliver supplies to Arctic Ocean ports. Salekhard was on the Ob River, downstream from Novosibirsk and Omsk, and Igarka was on the Yenisei, which flowed north from Krasnoyarsk, Irkutsk, and the mountains around Lake Baikal 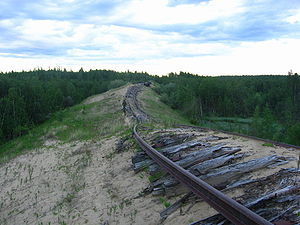 Railway between Salekhard and Nadym

Prison labour was used to construct the railroads of Imperial Russia and later those of the Soviet Union during the rapid industrialization of the 1930s. 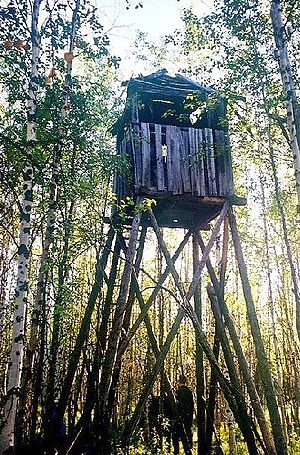 Construction of the Salekhard–Igarka Railway began in the summer of 1949 under the supervision of Col. V.A. Barabanov. The 501st Labour Camp began work eastward from Salekhard, while the 503rd Labour Camp pushed westward from Igarka. Plans called for a single railway line with 28 stations and 106 sidings. It was not feasible to span the 2.3 km Ob River crossing or the 1.6 km wide Yenisei River crossing. Ferries were used in the summer, while in the winter the trains spanned the river on ice with specially strengthened crossties.

It was estimated that anywhere from 80,000 to 120,000 labourers were engaged in the project. In the winter, construction was hampered by severe cold, permafrost, and food shortages. In the summer came bogged terrain, diseases, and the pestilence of mosquitoes, gnats, midges, and horseflies. On the technical side, engineering problems included construction across permafrost, a poor logistical system, and tight deadlines compounded by a severe lack of power machinery. As a result, railway embankments slowly settled into the marsh or were eroded by ponding. A shortage of materials also affected the project. One-meter segments of damaged rail lines from war-torn areas had to be sent in and re-welded to form 10-meter lengths.

As the project progressed, it became clear that there was actually little demand for this railway. In 1952, officials permitted a reduced tempo of work on the project. Construction was stopped in 1953 after Stalin's death. A total of 434 miles (698 km) of railway were completed at an official cost of 260 million rubles, later estimated to be near 42 billion 1953 rubles (2.5% of total Soviet capital investment at the time, or about $10 billion in 1950 dollars). The project was quickly destroyed by frost heaves and structural failures arising from underconstruction. At least 11 locomotives and 60,000 tons of metal were abandoned, and bridges have decayed or burned down. However, the corridor's telephone network remained in service until 1976.

About 350 km of track between Salekhard and Nadym remained in operation from the 1950s to the 1980s. However, in 1990, the line was shut down, and due to rising steel prices the first 92 km of rail from Salekhard were dismantled and recycled during the 1990s.

The far western section of the railway, linking Labytnangi with the railway to Vorkuta, and thus to the rest of the Russian rail network, is the only section that has continuously remained in operation. A bridge across the Ob to Salekhard is currently being built.

The section between Pangody and Novy Urengoy was rebuilt in the 1970s with the development of the gas deposits in the region, including a branch to Yamburg. The line connects to the rest of the Russian rail network at Korotchayevo.

Around the year 2000, discussion began about building a railway to Norilsk, about 220 km from Igarka, following much of the original corridor, to support the nickel and petroleum industry.

Known as part of the Northern Latitudinal Route, Северный широтный ход, new construction of the railway section between Salekhard and Nadym started on 19 March 2010 in Salekhard.[1][7][8] This section was finished in 2014 and opened in 2015,[5][9] with combined road-rail bridges across the Ob and Nadym rivers, thus connecting to the existing Russian railway system at both ends.[6]