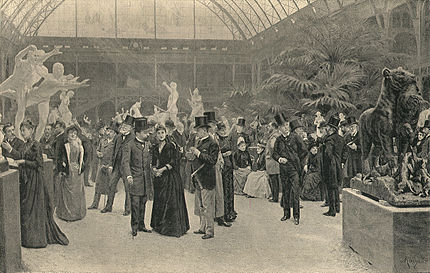 Formally dressed patrons at the Salon in 1890

The Salon (French: Salon), or rarely Paris Salon (French: Salon de Paris), beginning in 1667[1] was the official art exhibition of the Académie des Beaux-Arts in Paris. Between 1748 and 1890 it was arguably the greatest annual or biennial art event in the Western world. At the 1761 Salon, thirty-three painters, nine sculptors, and eleven engravers contributed.[2] From 1881 onward, it has been managed by the Société des Artistes Français.

In 1667, the royally sanctioned French institution of art patronage, the Académie royale de peinture et de sculpture[1] (a division of the Académie des beaux-arts), held its first semi-public art exhibit at the Salon Carré. The Salon's original focus was the display of the work of recent graduates of the École des Beaux-Arts, which was created by Cardinal Mazarin, chief minister of France, in 1648. Exhibition at the Salon de Paris was essential for any artist to achieve success in France for at least the next 200 years. Exhibition in the Salon marked a sign of royal favor.

In 1725, the Salon was held in the Palace of the Louvre, when it became known as Salon or Salon de Paris. In 1737, the exhibitions, held from 18 August 1737 to 5 September 1737 at the Grand Salon of the Louvre,[3] became public. They were held, at first, annually, and then biennially, in odd-numbered years. They would start on the feast day of St. Louis (25 August) and run for some weeks. Once made regular and public, the Salon's status was "never seriously in doubt" (Crow, 1987). In 1748 a jury of awarded artists was introduced. From this time forward, the influence of the Salon was undisputed. 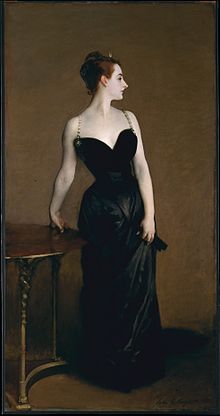 This portrait by John Singer Sargent of Virginie Amélie Avegno Gautreau depicting her cleavage caused considerable controversy when it was displayed at the 1884 Salon.

The Salon exhibited paintings floor-to-ceiling and on every available inch of space. The jostling of artwork became the subject of many other paintings, including Pietro Antonio Martini's Salon of 1785. Printed catalogues of the Salons are primary documents for art historians. Critical descriptions of the exhibitions published in the gazettes mark the beginning of the modern occupation of art critic.

The French revolution opened the exhibition to foreign artists. In the 19th century the idea of a public Salon extended to an annual government-sponsored juried exhibition of new painting and sculpture, held in large commercial halls, to which the ticket-bearing public was invited. The vernissage (varnishing) of opening night was a grand social occasion, and a crush that gave subject matter to newspaper caricaturists like Honoré Daumier. Charles Baudelaire, Denis Diderot and others wrote reviews of the Salons.

The 1848 revolution liberalized the Salon. The amount of refused works was greatly reduced. In 1849 medals were introduced.

The increasingly conservative and academic juries were not receptive to the Impressionist painters,[4] whose works were usually rejected, or poorly placed if accepted. The Salon opposed the Impressionists' shift away from traditional painting styles. In 1863 the Salon jury turned away an unusually high number of the submitted paintings. An uproar resulted, particularly from regular exhibitors who had been rejected. In order to prove that the Salons were democratic, Napoleon III instituted the Salon des Refusés, containing a selection of the works that the Salon had rejected that year. It opened on 17 May 1863, marking the birth of the avant-garde. The Impressionists held their own independent exhibitions in 1874, 1876, 1877, 1879, 1880, 1881, 1882 and 1886.

In 1881, the government withdrew official sponsorship from the annual Salon, and a group of artists organized the Société des Artistes Français to take responsibility for the show.[1] 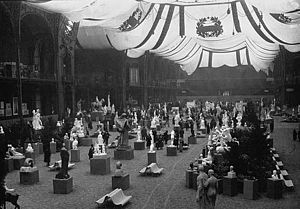 In December 1890, the leader of the Société des Artistes Français, William-Adolphe Bouguereau, propagated the idea that Salon should be an exhibition of young, yet not awarded, artists. Ernest Meissonier, Puvis de Chavannes, Auguste Rodin and others rejected this proposal and made a secession. They created the Société Nationale des Beaux-Arts and its own exhibition, immediately referred to in the press as the Salon du Champ de Mars [5] or the Salon de la Société Nationale des Beaux–Arts;[6] it was soon also widely known as the Nationale.

In 1903, in response to what many artists at the time felt was a bureaucratic and conservative organization, a group of painters and sculptors led by Pierre-Auguste Renoir and Auguste Rodin organized the Salon d'Automne.