The Sami flag is the flag of the Sámi people, the indigenous nation of the Nordic countries and the Kola Peninsula of the Russian Federation. The flag is also sometimes used to represent the territory of Sápmi, the traditional area of Sámi inhabitance. 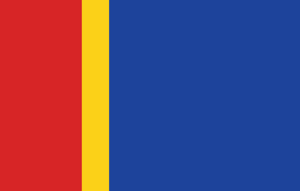 The first, unofficial Sámi flag was designed by Coast Sámi artist Synnøve Persen from Porsáŋgu in 1977. It was used as a national symbol in the demonstrations against the planned Alta Dam; an event which triggered a new era in Sámi politics and has attained strong symbolic significance. The flag was a tricolor structured in a way suggesting the Nordic cross applied on the flags of the Nordic countries. The colours (blue, red and yellow) are commonly used on gáktis - the traditional Sámi garb. 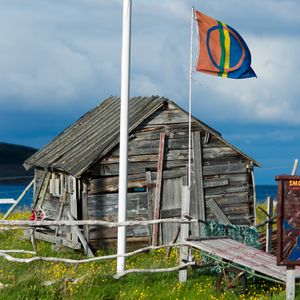 The Sami flag flying outside a cabin

The first official Sámi flag was recognized and inaugurated on 15 August 1986 by the 13th Nordic Sami Conference in Åre, Sweden. The flag was the result of a competition for which more than seventy suggestions were entered. In the end, one new design was considered against the existing, unofficial flag - and came out winning. The design was submitted by the Coast Sámi artist Astrid Båhl from Ivgubahta/Skibotn, in Tromssa/Troms county, Norway.

The basic structure of Persen's flag was retained, but Båhl added the colour green - which is popular on many South Sámi gáktis. These four colours have been known since then as "the Sámi (national) colours". She also added a motif which derived from a sun/moon symbol appearing on many shaman's drums. While drawings on shaman's drums were only made in red (using an extract of the sacred alder tree), the motif on the flag uses both blue and red - the first representing the moon, the latter representing the sun. Pantone colour formula is: red 485C, green 356C, yellow 116C and blue 286C.[1][2][3]

Children of the Sun

The motif was chosen with the poem "Päiven parneh" ("Sons of the Sun") in mind. The poem was written down by the South Sámi Protestant priest Anders Fjellner (1795-1876), from a joik heavy in elements from Sámi mythology.[4] The poem describes the Sámi as "sons and daughters of the sun",[5] through the union between a female "giant" (an unidentified mythological entity) who lives in a "House of Death" far in the North, and the Sun's male offspring with whom she elopes.[4] The Sámi are also referred to as "offspring of the Sons of the Sun" in the Sámi national anthem.[5]

Seventeen years after its adoption by the Sámi Council, in 2003, the Sámi flag received official status in Norway, the country with the largest Sámi population. It is now compulsory for municipalities in Norway to fly the flag on February 6, the Sámi National Day.

The Sámi Council earlier had full ownership to the flag and other national symbols, but since the 18th Sámi Conference they now share that ownership with the Sámi Parliamentary Council. The joint committee of national symbols also has the duty right to determine new national symbols in accordance with international principles of heraldry. The flag itself does not conform to the rule of tincture.

Finnmárkuopmodat, the autonomous entity established by the Finnmark Act has a logo that according to the entity's website "gets it colours from the Sámi and the Norwegian flag, as a symbol that the Finnmark Estate feels related to and responsible for both Sámi, kvens and ethnic Norwegians. (...) The circular shape... refers both to the Sámi flag's sun-symbol and to the solid and safe envelopment of a circle. (...) It is opened up to allow the Northern Lights a gateway into the Norwegian and the Sámi flag's colours."[8]

The elected Council of Plenipotentiary Representatives of the Sámi of Murmansk Province uses a symbol heavily inspired by the flag: two reindeer horns joined like a crescent, the upper half red and the lower half blue, between the halves are two stripes in yellow and green. The official Centre for Indigenous People in Murmansk Province, under which the official Council of Indigenous Peoples under the [Provincial] Government operates, uses a logo also inspired by the flag: a circle, left half blue and right half red, at the centre of which is a brown lávvu, a blue line symbolizing water, and a multicoloured line symbolizing the Aurora Borealis, the colours of the latter being from left to right red, yellow, green and blue.