The sardana (Catalan pronunciation: [sərˈðanə], Western Catalan: [saɾˈðana]; plural sardanes) is a type of circle dance typical of Catalan culture. The dance was originally from the Empordà region, but started gaining popularity throughout Catalonia during the 20th century.

There are two main types, the original sardana curta (short sardana) style and the more modern sardana llarga (long sardana), which is more popular. Other more unusual sardanes are the sardana de lluïment and the sardana revessa.

The origin of the sardana is not clear. It is said that this dance was already popular in the 16th century.[citation needed]

What remains undisputed is that the sardana was a popular dance in Empordà, Rosselló and Garrotxa at the middle of the 19th century. Contributing to its mounting popularity by this time were the additions from similarly popular genres such as zarzuela and the popular Italian operas of the time, which increasingly made the sardana a fad dance.[1]

As the rise of the sardana took place, in the context of the Renaixença or newborn Catalan nationalism, the origins of the dance were embellished in order to symbolize a distinct Catalan ethos as to serve Catalan nationalism.[1] Modern choreography was established as late as the end of the 19th century and features slight differences from the original North-Catalonian dance. Pep Ventura's band is credited for stabilizing different variants around a clear 6/8 rhythm and fixing the instrumental ensemble. Though some Iberian and Mediterranean circle dances follow similar patterns, instrumental music for the sardana has achieved a complexity of its own.

In the year 2010, the Government of Catalonia added the sardana to the Catàleg del Patrimoni Festiu de Catalunya (Catalonia's festivities heritage catalogue) and declared it a festivity of national interest.

Music for the sardana is played by a cobla, a band consisting of 10 wind instruments, double bass and a tamborí (little drum) played by 11 musicians. The cobla has five woodwind instruments: the flabiol which is a small fipple flute, and the tenora and tible (two of each) which belong to the oboe family. These and the tamborí are typical Catalan instruments. The brass instruments include: two trumpets, two fiscorns, and a trombone (usually a valve trombone). The double bass was traditionally a three-stringed one, but now the part is usually written for and played on the modern (four-stringed) instrument.

In Catalonia, about one hundred and thirty cobles are active, most of which are amateur bands. Outside Catalonia, there is at least one more cobla: Cobla La Principal d'Amsterdam.

Sardana in the Plaça Sant Jaume in Barcelona

The music written for the dance is a sardana (pl. sardanes), and is usually in two sections (tirades), called curts and llargs, each of which may be repeated in various ways to form the pattern for the complete dance. There is usually an experienced dancer leading the circle. The dancers hold hands throughout the dance: arms down during the curts and raised to shoulder height during the llargs.

The number of measures in the curts and llargs, called the tiratge or "run", is important to the players, and may be indicated before the start of the dance (e.g. a "run" shown as 25x79 indicates 25 measures of curts and 79 measures of llargs) in order to terminate the tirada correctly with the correct foot, though a method commonly used is to count the measures in the first tirada and not dance until the second has begun.

As a relatively slow, non-performance dance, the sardana does not require special fitness. The dance circle can be opened to a highly variable number of dancers. When danced in the streets and town squares, small circles of dancers can be seen to form and grow: these are open circles called rotllanes obertes, and passers-by can join, leaving their bags in the center of the circle. When a dance circle is too big it may split into smaller circles. The dancers are alternate men and women - with the man's partner on his right - and care must be taken by those joining not to split partners. Another kind of circle may be formed by members of organised sardana clubs called colles, and each colla may wear its own costume. 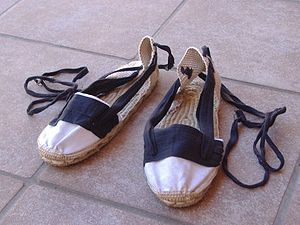 In order to dance sardanes comfortably the footwear must be flexible enough to allow the dancer to jump slightly when the llargs come. Traditionally sardanistes wear special dancing shoes called espardenyes made of esparto grass fabric and with two long fabric strips to tie them up around the ankle. Nowadays most people have replaced these with regular trainers.

Many sardanes have sung versions, but mostly instrumental versions are used for dancing. Recordings of sardanes or sardanes played in concert usually contain the introit, two curts and two llargs. Sardanes may be recorded for dancing, having all the entrades in order. Often sardanes are written for special occasions or to commemorate people.