From Infogalactic: the planetary knowledge core
Jump to: navigation, search
This article describes scapegoat in its traditional historical sense. For scapegoat in the more modern social psychological sense of scapegoating, see scapegoating.
For other uses, see Scapegoat (disambiguation). 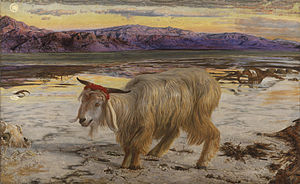 The Scapegoat by William Holman Hunt, 1854.

A scapegoat is a person or animal which takes on the sins of others, or is unfairly blamed for problems. The concept comes originally from Leviticus, in which a goat is designated to be cast into the desert with the sins of the community. Other ancient societies had similar practices. In psychology and sociology, the practice of selecting someone as a scapegoat has led to the concept of scapegoating.

And Aaron shall place lots upon the two goats: one lot "For the Lord," and the other lot, "For Azazel. (for absolute removal)"

The word 'scapegoat' is an English translation of the Hebrew azazel (Hebrew: עזאזל) which occurs in Leviticus 16:8. The lexicographer Gesenius[1] and Brown–Driver–Briggs Hebrew Lexicon[2] give la-azazel (Hebrew: עזאזל) as a reduplicative intensive of the stem azel "remove", hence la-azazel, "for entire removal". This reading is supported by the Greek Old Testament translation as "the sender away (of sins)".

"And Aaron shall cast lots over the two goats, one lot for the Lord and the other lot for Azazel."1

Footnote [1] 16:8 The meaning of Azazel is uncertain. ESV

Alternatively, broadly contemporary with the Septuagint, the pseudepigraphical Book of Enoch may preserve Azazel as the name of a fallen angel.[3][4][5] English Christian Bible versions traditionally follow the translation of the Septuagint and Latin Vulgate which interpret azazel as "the goat that departs" (Greek tragos apopompaios, "goat sent out", Latin caper emissarius, "emissary goat"). William Tyndale rendered the Latin as "(e)scape goat" in his 1530 Bible. This translation was followed by following versions up to the King James Version of the Bible in 1611: "And Aaron shall cast lots upon the two goats; one lot for the Lord, and the other lot for the scapegoat."[6] Several modern versions however either follow the reading as a demon, Azazel, or footnote "for Azazel." as an alternative reading.

Jewish sources in the Talmud (Yoma 6:4,67b) give the etymology of azazel as a compound of "az", strong or rough, and "el", mighty, that the goat was sent from the most rugged or strongest of mountains.[7] From the Targums onwards the term azazel was also seen by some rabbinical commentators as the name of a Hebrew demon, angelic force, or pagan deity.[8] The two readings are still disputed today.[9]

A concept superficially similar to the biblical scapegoat is attested in two ritual texts in archives at Ebla of the 24th century BC.[10] They were connected with ritual purification on the occasion of the king's wedding. In them, a she-goat with a silver bracelet hung from her neck was driven forth into the wasteland of "Alini"; "we" in the report of the ritual involves the whole community. Such "elimination rites", in which an animal, without confession of sins, is the vehicle of evils (not sins) that are chased from the community are widely attested in the Ancient Near East.[11]

The Ancient Greeks practiced a scapegoating rite in which a cripple or beggar or criminal (the pharmakos) was cast out of the community, either in response to a natural disaster (such as a plague, famine or an invasion) or in response to a calendrical crisis (such as the end of the year). The scholia refer to the pharmakos being killed, but many scholars reject this, and argue that the earliest evidence (the fragments of the iambic satirist Hipponax) only show the pharmakos being stoned, beaten and driven from the community.[12]

The scapegoat was a goat that was designated (Hebrew לַעֲזָאזֵֽל ) la-aza'zeyl; "for absolute removal", (for symbolic removal of the people's sins with the literal removal of the goat) and outcast in the desert as part of the ceremonies of the Day of Atonement, that began during the Exodus with the original Tabernacle and continued through the times of the temples in Jerusalem.

Once a year, on Yom Kippur, the Cohen Gadol sacrificed a bull as a sin offering to atone for sins he may have committed unintentionally throughout the year. Subsequently he took two goats and presented them at the door of the tabernacle. Two goats were chosen by lot: one to be "for YHWH", which was offered as a blood sacrifice, and the other to be the scapegoat to be sent away into the wilderness. The blood of the slain goat was taken into the Holy of Holies behind the sacred veil and sprinkled on the mercy seat, the lid of the ark of the covenant. Later in the ceremonies of the day, the High Priest confessed the intentional sins of the Israelites to God placing them figuratively on the head of the other goat, the Azazel scapegoat, who would symbolically "take them away".

In Christianity, especially in Protestantism, this process prefigures the sacrifice of Christ on the cross through which God has been propitiated and sins can be expiated. Jesus Christ is seen to have fulfilled all of the Biblical "types" - the High Priest who officiates at the ceremony, the Lord's goat that deals with the pollution of sin and the scapegoat that removes the "burden of sin". Christians believe that sinners who own their guilt and confess their sins, exercising faith and trust in the person and sacrifice of Jesus, are forgiven of their sins.

Since the second goat was sent away to perish,[14] the word "scapegoat" has developed to indicate a person who is blamed and punished for the sins of others.

The concept of scapegoating has become a proverb in many cultures and languages, implying to an innocent person to be blamed for the sin of others. For instance in Persian language the equivalent proverb is "Beheading the Blacksmith of Balkh".[15]

The dictionary definition of scapegoat at Wiktionary