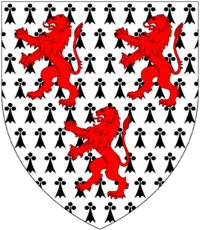 Sir George Chudleigh, 1st Baronet (c. 1578 – 15 January 1658) of Ashton, Devon, was an English landowner and politician who sat in the House of Commons at various times between 1601 and 1625. He supported the Royalist cause in the English Civil War after opposing the king initially.

Chudleigh was the son of John Chudleigh (1565-1589), of Ashton in Devon, who according to the Devon historian Sir William Pole (d.1635) "Hassarded all his great estate unto ruyn" and sold the family's original manor of Chudleigh, in Devon, to his tenants.[2] His mother was Elizabeth Speke, daughter of Sir George Speke (c.1530-1584) of Whitelackington in Somerset, Sheriff of Somerset in 1562–63 and Member of Parliament for Somerset 1572-83. The de Chudleigh family originated at the manor of Chudleigh,[3] in Devon, and later moved to nearby Ashton.

Chudleigh opposed the King at the start of the Civil War, but later, with his son, took up arms for the King and published, in 1643, a declaration of his reasons for doing so. He is said "to have paid dear" for his loyalty.[4]

In May 1643, the Earl of Stamford, who had just entered Cornwall with an army of seven thousand men, sent a party of twelve hundred horse, under the command of Chudleigh, to Bodmin, in order to surprise the high sheriff and gentlemen of the county. When Chudleigh heard of the defeat of the parliamentarian army, commanded by his son Major-general James Chudleigh, at Stratton Hill, he removed from Bodmin to Plymouth, and thence to Exeter. After Stamford had accused James Chudleigh of treachery, Sir George surrendered his commission, and published a 'Declaration' which is reprinted in Rushworth's Historical Collections, vol. ii. pt. iii. p. 272. Subsequently he espoused the cause of the king.[5]

Chudleigh died in 1658 and was buried in Ashton church.[5]

In or before 1606 he married Mary Strode, eldest daughter of Sir William Strode (died 1637), MP, of Newnham, Plympton St Mary, Devon,[4] by whom he had 9 sons and 9 daughters, including: