The Society Islands (French: Îles de la Société or officially Archipel de la Société; Tahitian: Tōtaiete mā) are a group of islands in the South Pacific Ocean. They are politically part of French Polynesia. The archipelago is suspected to have been named by Captain James Cook during his first voyage in 1769, supposedly in honour of the Royal Society, the sponsor of the first British scientific survey of the islands; however, Cook himself stated in his journal that he called the islands Society "as they lay contiguous to one another."[2] 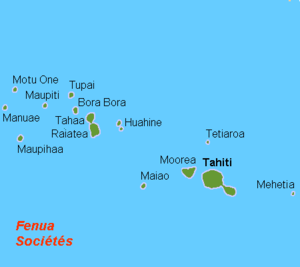 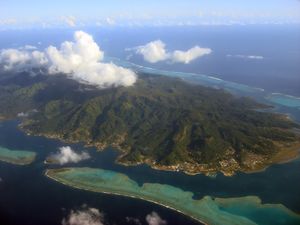 The islands are divided, both geographically and administratively, into two groups:

The islanders explain their origins in term of a myth. The feathered god Ta'aroa lay in his shell. He called out but no-one answered, so he went back into his shell, where he stayed for aeons. When he came out he changed his body into the multi-layered dome of the sky. Other parts of his body he transformed into Papa-fenua, the earth. Other parts he made into Te Tuma, the ata, or shadow of his phallus. Ta'aroa said, "Cast your eyes on my phallus. Gaze upon it and insert it in the earth." He came down to earth at "Opoa in Havai'i" (now Ra'iatea), one of the most sacred places in the Society Islands. Other gods were created, and these ran directly into the time of the people. The high chiefs or ari'i rahi were descendants from the gods, reckoned to be forty generation previously. In their presence commoners showed respect by stripping to the waist. The high chiefs erected marae as places of worship. 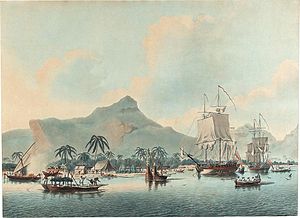 HMS Resolution and Discovery in Huahine, commanded by James Cook

In the generations before Europeans arrived, a cult called 'Oro-maro-'ura developed: the cult of the red-feathered girdle. This became a tangible symbol of the chief's power. Key followers of the 'Oro cult were the 'arioi, who lived separately from the common people. They wore scented flowers and adorned themselves with scents and scarlet-dyed cloth. The head of each 'arioi group was heavily tattooed from ankle to thigh and known as a blackleg. Both male and female blacklegs were a privileged group but they were forbidden to have children. Their babies were all killed at birth. They received and gave lavish presents. They had a wide range of artistic skills and could be priests, navigators and lore specialists. Only good-looking men or women could become 'arioi. They played a crucial role in ceremonies associated with birth, deaths and marriage.[3]

The first European explorers arrived in 1722. Jacob Roggeveen's Dutch West Indian Expedition was shipwrecked on Takapoto. Survivors managed to row to another small island and islanders were killed with muskets. In 1765 John Byron's two British ships, including HMS Dolphin, briefly visited the area. In 1767 HMS Dolphin returned, now under Captain Samuel Wallis. The captain and crew were quite sick with scurvy on arrival and were keen to obtain fresh food. The islanders who had learnt about iron 45 years earlier were delighted at the abundance of iron on the ship and tried to board the ship. After several contacts, when natives attempted to take iron fittings Wallis was forced to shoot cannon to regain control.[4]

Europeans quickly found that the islanders were desperate to obtain iron. The sailors found that young women and girls were eager to exchange sex for a nail, which was used for woodworking and as fish-hooks. Traditionally young women had offered themselves to ancestor gods in the form of chiefs or other high status individuals. Some rituals involved chiefs having sex with virgins in public view, and this was offered to some European captains and officers, who declined.[5]

Louis de Bougainville, a French nobleman, sailor and soldier, led an expedition to the Society Islands in 1769 to observe the transit of Venus. He arrived with a crew stricken with scurvy. Despite the crew being twice as big as the Dolphin′s, the islanders had sufficient food to trade their surplus for axes, knives and other iron goods.[6]