From Infogalactic: the planetary knowledge core
Jump to: navigation, search
This article is about the network topology. For the interbank network, see STAR (interbank network). For other uses, see Starnet. 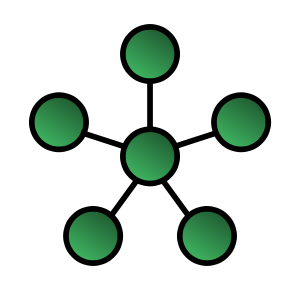 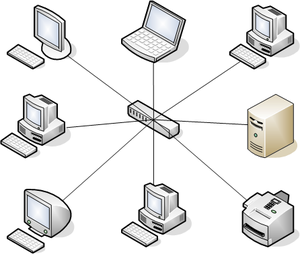 Star networks are one of the most common computer network topologies. In its simplest form, a star network consists of one central switch, hub or computer, which acts as a conduit to transmit messages. This consists of a central node, to which all other nodes are connected; this central node provides a common connection point for all nodes through a hub. In star topology, every node (computer workstation or any other peripheral) is connected to a central node called a hub or switch. The switch is the server and the peripherals are the clients.[1] Thus, the hub and leaf nodes, and the transmission lines between them, form a graph with the topology of a star. If the central node is passive, the originating node must be able to tolerate the reception of an echo of its own transmission, delayed by the two-way transmission time (i.e. to and from the central node) plus any delay generated in the central node. An active star network has an active central node that usually has the means to prevent echo-related problems.

It is also designed with each node (file servers, workstations, and peripherals) connected directly to a central network hub, switch, or concentrator.