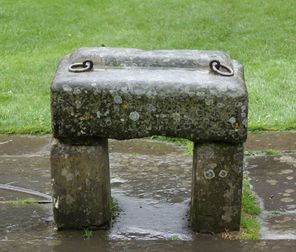 File:Stone of scone replica 170609.jpg
A replica of the Stone of Scone

The Stone of Scone (/ˈskuːn/; Scottish Gaelic: An Lia Fàil, Scots: Stane o Scuincode: sco is deprecated )—also known as the Stone of Destiny, and often referred to in England as The Coronation Stone—is an oblong block of red sandstone that was used for centuries in the coronation of the monarchs of Scotland, and later the monarchs of England and the Kingdom of Great Britain. Historically, the artefact was kept at the now-ruined Scone Abbey in Scone, near Perth, Scotland. It is also known as Jacob's Pillow Stone and the Tanist Stone, and in Scottish Gaelic, clach-na-cinneamhain. Its size is about 26 inches (660 mm) by 16.75 inches (425 mm) by 10.5 inches (270 mm) and its weight is approximately 336 pounds (152 kg). A roughly incised cross exists on one surface, and an iron ring at each end aids with transportation.[1] The Stone of Scone was last used in 1953 for the coronation of Elizabeth II of the United Kingdom of Great Britain and Northern Ireland. 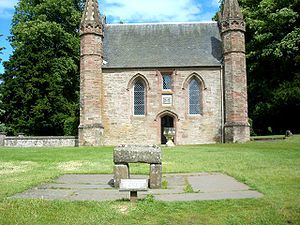 Replica of the Stone of Scone at Scone Palace

In the 14th century, the English cleric and historian Walter Hemingford described the location of the Scottish coronation stone as the monastery of Scone, a few miles north of Perth:

In the monastery of Scone, in the church of God, near to the high altar, is kept a large stone, hollowed out as a round chair, on which their kings were placed for their ordination, according to custom.

Various theories and legends exist about the Stone's history prior to its placement in Scone:

Geologists proved that the Stone taken by Edward I of England to Westminster[7] is a "lower Old Red Sandstone", which was quarried in the vicinity of Scone.[8] Doubts over the authenticity of the Stone have existed for a long time: a blog post by retired Scottish academic and writer of historical fiction Marie MacPherson shows that they date back at least two hundred years.[9]

A letter to the editor of the Morning Chronicle, dated 2 January 1819, states:

On the 19th of November, as the servants belonging to the West Mains of Dunsinane-house, were employed in carrying away stones from the excavation made among the ruins that point out the site of Macbeth's castle here, part of the ground they stood on suddenly gave way, and sank down about six feet, discovering a regularly built vault, about six feet long and four wide. None of the men being injured, curiosity induced them to clear out the subterranean recess, when they discovered among the ruins a large stone, weighing about 500l [230 kg]. which is pronounced to be of the meteoric or semi-metallic kind. This stone must have lain here during the long series of ages since Macbeth's reign. Besides it were also found two round tablets, of a composition resembling bronze. On one of these two lines are engraved, which a gentleman has thus deciphered.— 'The sconce (or shadow) of kingdom come, until Sylphs in air carry me again to Bethel.' These plates exhibit the figures of targets for the arms. From time immemorial it has been believed among us here, that unseen hands brought Jacob's pillow from Bethel and dropped it on the site where the palace of Scoon now stands. A strong belief is also entertained by many in this part of the country that it was only a representation of this Jacob's pillow that Edward sent to Westminster, the sacred stone not having been found by him. The curious here, aware of such traditions, and who have viewed these venerable remains of antiquity, agree that Macbeth may, or rather must, have deposited the stone in question at the bottom of his Castle, on the hill of Dunsinane (from the trouble of the times), where it has been found by the workmen. This curious stone has been shipped for London for the inspection of the scientific amateur, in order to discover its real quality.[1]

Stone of Scone in the Coronation Chair at Westminster Abbey, 1855

In 1296, the Stone was captured by Edward I as spoils of war and taken to Westminster Abbey, where it was fitted into a wooden chair—known as King Edward's Chair—on which most subsequent English sovereigns have been crowned. Edward I sought to claim his status as the "Lord Paramount" of Scotland, with the right to oversee its King.[10]

Some doubt exists over the stone captured by Edward I. The Westminster Stone theory posits that the monks at Scone Palace hid the real stone in the River Tay, or buried it on Dunsinane Hill, and that the English troops were tricked into taking a substitute. Some proponents of the theory claim that historic descriptions of the Stone do not match the present stone.[5]

In The Treaty of Northampton 1328, between the Kingdom of Scotland and the Kingdom of England, England agreed to return the captured Stone to Scotland; however, riotous crowds prevented it from being removed from Westminster Abbey.[11] The Stone remained in England for another six centuries, even after James VI of Scotland assumed the English throne as James I of England. For the next century, the Stuart kings and queens of Scotland once again sat on the stone but at their coronation as kings and queens of England.

Main article: Removal of the Stone of Scone in 1950

On Christmas Day 1950, a group of four Scottish students (Ian Hamilton, Gavin Vernon, Kay Matheson, and Alan Stuart) removed the Stone from Westminster Abbey for return to Scotland.[12] During the removal process, the Stone broke into two pieces.[13][14] After burying the greater part of the Stone in a Kent field, where they camped[15] for a few days, they uncovered the buried stone and returned to Scotland, along with a new accomplice, John Josselyn. According to one U.S. diplomat who was posted in Edinburgh at the time, the Stone was hidden for a short time in a trunk in the basement of the Consulate's Public Affairs Officer, unbeknownst to him, before it was removed. [16] Although an Englishman, Josselyn, who was then a student at the University of Glasgow, was a Scottish Nationalist. Furthermore, Edward I was Josselyn's 21st great grandfather.[17] The smaller piece was similarly brought north at a later time. The entire Stone was passed to a senior Glasgow politician, who arranged for it to be professionally repaired by Glasgow stonemason Robert Gray.[citation needed]

A major search for the stone was ordered by the British Government, but proved unsuccessful. The custodians left the Stone on the altar of Arbroath Abbey on 11 April 1951, in the safekeeping of the Church of Scotland. Once the London police were informed of its whereabouts, the Stone was returned to Westminster four months after it was removed. Afterward, rumours circulated that copies had been made of the Stone, and that the returned Stone was not in fact the original.[18][19]

In 1996,[19] in a symbolic response to growing dissatisfaction among Scots at the prevailing constitutional settlement, the British Conservative Government decided that the Stone should be kept in Scotland when not in use at coronations. On 3 July 1996, it was announced in the House of Commons that the Stone would be returned to Scotland, and on 15 November 1996, after a handover ceremony at the border between representatives of the Home Office and of the Scottish Office, it was transported to Edinburgh Castle. The Stone arrived in the Castle on 30 November 1996 and it remains alongside the crown jewels of Scotland (the Honours of Scotland) in the Crown Room. The handover occurred on St Andrew's Day, a day in honour of the patron Saint of Scotland, and Prince Andrew, Duke of York was the Queen's representative.[citation needed]

Stone of Scone has appeared in print, television and film media:

The Stone and its authenticity were the subject of the 1958 novel The Stone, by Scottish historical novelist Nigel Tranter. The Stone also appears in Tranter's novel Macbeth the King.

The Stone of Scone figures prominently in Das Königsprojekt, a 1974 novel by the German writer Carl Amery.

The return of the Stone of Scone to Scotland is documented in the Scottish Gaelic song "Òran na Cloiche" ("Song of the Stone"), covered by artists such as Kathleen MacInnes and Mànran.

In the episode "Pendragon", of the Gargoyles television series, King Arthur arrives in London and encounters the Stone of Destiny at Westminster Abbey. The Stone tells Arthur that he must prove himself once more worthy of Excalibur, and sends him and his "squire"—the London Clan gargoyle Griff—to New York to complete the task. The story is expanded in the follow-up Gargoyles SLG comics.

In 1996 Trilobyte released the game Clandestiny, in which the ultimate goal is to find the Stone of Scone and return it to its proper place.

In the two-part series finale of the Hamish Macbeth TV series, which aired in 1997, a millionaire is searching for the real Stone, as the one in Westminster Abbey is a fake. Hamish (Robert Carlyle) leads a posse on a trek to rescue their friend and save the Stone.

In a 1997 episode of the television series Highlander, the 1950 return was adapted, with the characters Duncan MacLeod (Adrian Paul), Hugh Fitzcairn (Roger Daltrey) and Amanda Darieux (Elizabeth Gracen) stealing the stone for various reasons.

Terry Pratchett's 1999 Discworld novel, The Fifth Elephant, is centred around the theft of a Dwarfish coronation seat, which is made from hardened bread and called the Scone of Stone.

In Patricia Kennealy Morrison's science-fantasy series The Keltiad, the 1986 novel The Throne of Scone describes a stone that has been transmuted into a throne.

The 2005 Doctor Who short story "Set in Stone" features the Doctor, Ian Chesterton, and Barbara Wright stealing the stone.

In 2000, a bilingual BBC film (English and Scottish Gaelic) Interrogation of a Highand Lass/An Ceasnachadh was released. The plot is about the 1950 liberation of the stone from Westminster Abbey, in which Matheson is played by Kathleen MacInnes.

In October 2008, a feature film called Stone of Destiny, based on the theft of the Stone, was released. The film was written and directed by Charles Martin Smith, and produced by Rob Merilees and William Vince. The role of the Scottish nationalist politician John MacCormick was played by Robert Carlyle.

In the 2010 film The King's Speech, Australian speech therapist Lionel Logue sits on the coronation throne to provoke King George VI into talking. In the ensuing argument, the king refers to the Stone of Scone.

The 2011 Jeanette Baker novel Legacy is a fictional account of the original Stone of Scone being hidden, while a replica is taken to Westminster Abbey.

In one adventure of Solar Pons, the Sherlock Holmes pastiche created by August Derleth, a Scottish nationalist steals the Stone from Westminster Abbey in 1935. The fictional event was first published in "The Return of Solar Pons" in 1958.