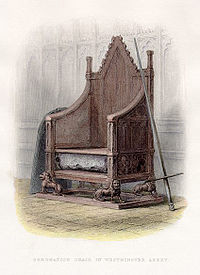 The Stone of Scone in the Coronation Chair at Westminster Abbey, 1855.

King Edward's Chair, sometimes known as St Edward's Chair or The Coronation Chair, is the throne on which the British monarch sits for the coronation. It was commissioned in 1296 by King Edward I to contain the coronation stone of Scotland — known as the Stone of Scone — which he had captured from the Scots who had kept it at Scone Abbey. The chair was named after Edward the Confessor, and was kept in his shrine of St Edward's Chapel at Westminster Abbey.

Since 1308, all anointed sovereigns of England (until 1603) and Great Britain (after the Union of the Crowns) have been seated in this chair at the moment of their coronation, with the exception of Queen Mary II (who was crowned on a copy of the chair).[1] The most recent occasion was the coronation of Elizabeth II in 1953. 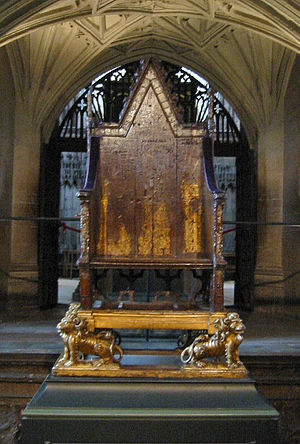 King Edward's Chair, as it stands now in Westminster Abbey, without the Stone of Scone.

The high backed gothic style arm chair was carved in 1297 from oak by a carpenter known as Master Walter, who was paid the considerable sum of 100 shillings for his work, which included gilding and painting the chair. Four gilded lions act as legs to the chair, added in the 16th century and then replaced in 1727. Under the seat of the chair is a platform and cavity which until 1996 contained the Stone of Scone; this has now been returned to Scotland with the provision that it be returned to the chair on the occasions of future coronations.[2]

The chair was originally richly painted and gilded. It had an image of either Edward the Confessor or Edward I painted on its back, with feet resting on a lion. Today, however, its appearance is of aged and bare wood, except for the lower parts of the front seatback and the side pieces, where some of Master Walter's paintings of foliage, birds and animals have survived. During its history many early tourists, pilgrims, and choir boys in the Abbey appear to have carved their initials and other graffiti onto the chair in the 18th and 19th centuries. The carved finials at the back of the chair have also been partially sawn away. In addition the chair was damaged in 1914 when it was the object of a bomb attack, thought to have been instigated by the suffragettes.

Over the eight centuries of its existence it has only been removed from Westminster Abbey three times. The first time was for the ceremony in Westminster Hall when Oliver Cromwell was inducted as Lord Protector of England, and the second during World War II when it was evacuated to Gloucester Cathedral for the duration of the war. The third was on Christmas Day 1950, when the Stone was stolen.

Today it is highly protected, and leaves its secure resting place (in the ambulatory on a raised modern pedestal near the tomb of Henry V) only when it is carried into the theatre of coronation near the High Altar of the Abbey for the rare occurrence of a coronation.

Other Chairs used during the Coronation Ceremony

It may be noted that other chairs are required and used during the coronation ceremony: Chairs of Estate for the Sovereign and Consort are placed on the north side of the Sanctuary, and these are used during the first part of the liturgy, prior to the Sovereign's anointing and crowning (for which St Edward's Chair is used). Then, for the part of the service called the Enthronement (and for the Homage which follows), the monarch is placed not in St Edward's Chair, but in a separate throne on an elevated platform in the centre of the Crossing. (On occasions when a Queen Consort has been crowned, a similar throne is provided for her, alongside that of the King but at a lower level). Unlike St Edward's Chair, these other chairs and thrones tend to be made anew for each Coronation. Thereafter (in recent times) they have often been placed in the Throne Rooms of the royal palaces. Thus the Chairs of Estate from the 1953 Coronation may be found in the Throne Room of Buckingham Palace, along with those of Queen Victoria and George VI and his consort Queen Elizabeth. The 1953 Homage Throne is to be found in the Garter Throne Room of Windsor Castle; the thrones of King Edward VII and Queen Alexandra are in Buckingham Palace Ballroom, and those of George V and Queen Mary may be seen in the Throne Room at Holyrood.[3][full citation needed]