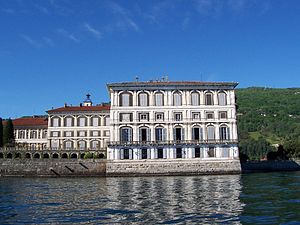 The Stresa Conference was held at the Palazzo Borromeo, a Renaissance villa on a small island near Stresa

The Stresa Front, formally called the Final Declaration of the Stresa Conference, was an agreement between French prime minister Pierre Laval, British prime minister Ramsay MacDonald, and Italian prime minister Benito Mussolini on 14 April 1935. The agreement took its name from the town of Stresa, situated on the banks of Lake Maggiore in Italy, where the conference was held. Its aim was to reaffirm the Locarno Treaties and to declare that the independence of Austria "would continue to inspire their common policy". The signatories also agreed to resist any future attempt by the Germans to change the Treaty of Versailles. The Stresa Front began to break down after Britain signed the Anglo-German Naval Agreement in June 1935, in which Germany was given permission to increase the size of its navy. It collapsed completely in the aftermath of Italy's invasion of Abyssinia in October 1935. 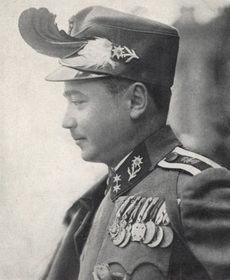 The assassination of the Austrian authoritarian leader Engelbert Dollfuss, pictured, sparked a political crisis between Germany and Italy

After Austrian Chancellor Engelbert Dollfuss was killed by German spies in July 1934, the Italian dictator Benito Mussolini assembled an army corps of four divisions on the Austrian border and threatened the German dictator Adolf Hitler with war in the event of a German invasion of Austria. The assassination of Dollfuss was accompanied by Nazi uprisings in many regions in Austria, resulting in further deaths. In Carinthia, a large contingent of northern German Nazis tried to seize power but were subdued by the Italian units nearby. So, the next year Mussolini promoted a conference in the Italian Alps in order to stop Hitler, when he wanted to rebuild the German military forces: a small lake-island facing Stresa - with a Renaissance villa called the Palazzo Borromeo - was chosen for the 3-day talks.

The Stresa Front was triggered by Nazi Germany's declaration of its intention to build up an air force, to increase the size of its army to 36 divisions (500,000 men – much more than the original 96,000 prescribed by the Treaty of Versailles) and to introduce conscription, in March 1935.

However British politicians did not want to attack or occupy Germany, and preferred to have agreements with him in order to maintain peace in Central Europe. Additionally, an anti-war sentiment was very strong among the British public. In February 1935, at a summit in London between the French Premier Pierre Laval and the British Prime Minister Ramsay MacDonald led to an Anglo-French communiqué issued in London that proposed talks with the Germans on arms limitation, an air part, and security pacts for Eastern Europe and the nations along the Danube.[1]

Furthermore, Mussolini believed that the signing of the Stresa Front would mean Britain and France would not interfere in the Abyssinia Crisis.

Even though the increasingly belligerent Germany dominated discussions within the conference room, Mussolini was at his cleverest when outside. He discussed with Britain plans to pursue his aim of making Italy "great, respected and feared" through the invasion and conquest of Abyssinia and ultimately create an all-powerful empire. Mussolini made sure not to discuss his expansionist plans within the confines of the conference itself due to the possible risk of the Western democracies issuing a veto over it. Furthermore, Mussolini could not risk the conference being sidetracked from its main aim of reaffirming Locarno and opposing any more breaches of international agreements. With this said, Mussolini got his way with his plans for invading Abyssinia not being brought up.

The Duce therefore regarded Britain's and France's silence as acquiescence to his colonial war and launched his invasion of Abyssinia in October 1935. The importance of this is not to be overlooked as it was the turning point for Mussolini concerning his foreign standing as he drifted away from Britain and France, and into the camp of Hitler's Germany.

In April 1935 the UK, Italy and France re-affirmed the Treaty of Locarno and agreed to form the Stresa Front to combat and contain Nazi Germany.

Soon after Stresa, on June 18th 1935, … Great Britain signed a naval agreement with them and without informing neither France nor Italy, which put a direct proportion to Germany and Britain by number and tonnage of warships, in fact renegading the agreements of Stresa, as well as those of Versailles of 1919. Benito Mussolini was furious when he heard the news and, unfortunately for Italy, convinced himself that Hitler couldn’t be stopped anymore and that, therefore, he had to ride the tiger. – John Simon[2]

However, the Stresa Front could be seen to have failed because its aims were vague and because it provided no clear means for enforcing its aims. It omitted any explicit reference to Germany because Britain was adopting a Dual Policy and did not want to antagonize Hitler. Whereas Mussolini preferred to be firm and uncompromising towards Germany, Britain preferred to allow for further negotiations with Germany in order to obtain agreements. Hitler had used tactics that made Britain and France guess at what his next move would be. However, because of the Stresa agreement's vague terms, Hitler was kept guessing at what Britain would do. Britain didn't realize the advantage that it had over Germany, and this was lost with the signing of the Anglo-German Naval Agreement.

Another reason for its failure was that Britain, France and Italy did not want to invade Germany. The only real way in which German rearmament could be stopped was by a full-scale invasion of Germany. However, the British government was unwilling to pursue this option as it perceived anti-war sentiment to be strong among the British public.

The Front was not successful. Within two months the UK had signed the Anglo-German Naval Agreement, by which Germany was allowed to increase the size of its navy to no more than 35% (by tonnage) of the Royal Navy and to build submarines. The UK had not discussed this with its Stresa partners and the Front was seriously damaged. This highlighted the divergent aims of the Stresa Front's member countries. Also, on 2 May 1935, France signed the Franco-Soviet Treaty of Mutual Assistance with the Soviet Union. The Front collapsed completely with Italy's invasion of Abyssinia.

For the French, the Anglo-German Naval Agreement was an "offense" to WWI victory agreements. Indeed the Naval Pact was signed in London on June 18, 1935, without the British government having consulted with France and Italy, or later, informing them of the secret agreements which stipulated that the Germans could build in certain categories more powerful warships than any of the three Western nations then possessed. The French regarded this as "treachery". They saw it as a further appeasement of Hitler, whose appetite grew on concessions. And they resented the British agreeing, for what they thought a private gain, to scrap further the peace treaty and thus add to the growing overall military power of Nazi Germany. Great Britain, as the French contended, had no legal right to absolve Germany of its obligation to respect the naval clauses of the Versailles Treaty.[3]

Mussolini had harboured ambitions of controlling Abyssinia for a long time. He was enraged when Britain signed the Anglo-German Naval Agreement without first informing him of its plans.[4] Mussolini had refrained from invading Abyssinia because it bordered French and British Somaliland and he didn't want to anger his allies. However, he felt Britain had betrayed him and this removed all doubts that he had regarding the invasion. He also believed that Britain's actions ended the restrictions to which the members of the Stresa Front had agreed.

On January 6, 1936, Mussolini told German ambassador Ulrich von Hassell that he would not object to Germany taking Austria as a satellite state so long as it maintained independence. Later, on the 22 February, Mussolini consented to Hitler's remilitarization of the Rhineland, stating that Italy would not honour the obligations of the Locarno Treaty should Germany take such action.[5]

In Italy and France the Stresa Conference is considered the last tentative to successfully stop Hitler while in his beginnings, and probably to block WWII.[6]