Engelbert Dollfuss (German: Engelbert Dollfuß, IPA: [ˈɛŋəlbɛʁt ˈdɔlfuːs]; October 4, 1892 – July 25, 1934) was an Austrian Christian Social and Patriotic Front statesman. Having served as Minister for Forests and Agriculture, he ascended to Federal Chancellor in 1932 in the midst of a crisis for the conservative government. In early 1933, he shut down parliament, banned the Austrian Nazi party and assumed dictatorial powers. Suppressing the Socialist movement in February 1934, he cemented the rule of “austrofascism” through the authoritarian First of May Constitution. Dollfuss was assassinated as part of a failed coup attempt by Nazi agents in 1934. His successor Kurt Schuschnigg maintained his regime until Adolf Hitler's annexing of Austria in 1938.

He was born in Texing in Lower Austria to unmarried mother Josepha Dollfuss and her lover Joseph Weninger. The couple, of peasant origin, was unable to get married due to financial problems. Josepha married landowner Leopold Schmutz a few months after her son's birth, who did not, however, adopt Engelbert as his own child. Dollfuss, who was raised as a devout Roman Catholic, was shortly in seminary before deciding to study law at the University of Vienna and then economics at the University of Berlin. There he met Alwine Glienke, a German woman from a Protestant family, whom he married in 1921.[1] The couple had a son and two daughters, one of whom died in early childhood.

Dollfuss had difficulty gaining admission into the Austro-Hungarian army in World War I because he was only 153 cm (slightly over five feet) tall.[2] He was eventually accepted and sent to the Alpine Front. He was a highly decorated soldier and was briefly taken by the Italians as a prisoner of war in 1918.[citation needed] After the war he worked for the agriculture ministry as secretary of the Farmers' Association and became director of the Lower Austrian Chamber of Agriculture in 1927. In 1930, as a member of the conservative Christian Social Party (CS), he was appointed president of the Federal Railway System. (One of the founders of the CS was a hero of Dollfuss's, Karl Freiherr von Vogelsang.) The following year, he was named Minister of Agriculture and Forests.

In late May 1932, with the resignation of Karl Buresch's Christian-Social government, Dollfuss, age 39 and with only one year's experience in the Federal government, was offered the office of Chancellor by President Wilhelm Miklas, also a member of the Christian-Social Party. Accordingly, Dollfuss refused to reply, instead spending the night in his favorite church praying, returning in the morning for a bath and a spartan meal before replying to the President he would accept the offer.[3] Dollfuss was sworn in on May 20, 1932, as head of a coalition government between the Christian-Social Party, the Landbund—a right-wing agrarian party—and Heimatblock, the parliamentary wing of the Heimwehr, a paramilitary ultra-nationalist group. The coalition assumed the pressing task of tackling the problems of the Great Depression. Much of the Austro-Hungarian Empire's industry had been situated in the areas that became part of Czechoslovakia and Yugoslavia after World War I as a result of the Treaty of Saint-Germain. Postwar Austria was therefore economically disadvantaged.

Dollfuss' majority in Parliament was marginal; his government had only a one-vote majority.[4]

Dollfuss as dictator of Austria 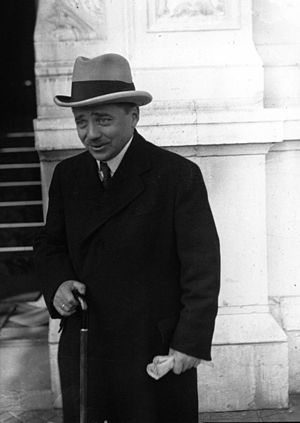 In March 1933, an argument arose over irregularities in the voting procedure. The Social Democratic president of the National Council (the lower house of parliament) Karl Renner resigned to be able to cast a vote as a parliament member. As a consequence, the two vice presidents, belonging to other parties, resigned as well to be able to vote. Without a president, the parliament could not conclude the session. Dollfuss took the three resignations as a pretext to declare that the National Council had become unworkable, and advised President Wilhelm Miklas to issue a decree adjourning it indefinitely. When the National Council wanted to reconvene days after the resignation of the three presidents, Dollfuss had police bar entrance to parliament, effectively eliminating democracy in Austria. From that point onwards, he governed as dictator by emergency decree with absolute power.

Dollfuss was concerned that with German National Socialist leader Adolf Hitler becoming Chancellor of Germany in 1933, the Austrian National Socialists (DNSAP) could gain a significant minority in future elections (according to fascism scholar Stanley G. Payne, should elections have been held in 1933, the DNSAP could have mustered about 25% of the votes - contemporary Time magazine analysts suggest a higher support of 50%, with a 75% approval rate in the Tyrol region bordering Nazi Germany).[5][6][7] As well, the Soviet Union's influence in Europe had increased throughout the 1920s and early 1930s. Dollfuss banned the communists on May 26, 1933 and the DNSAP on June 19, 1933. Under the banner of Christian Social Party, he later established a one-party dictatorship rule largely modeled after fascism in Italy, banning all other Austrian parties including the Social Democratic Labour Party (SDAPÖ). Social Democrats however continued to exist as an independent organization, nevertheless, without its paramilitary Republikanischer Schutzbund, which until March 31, 1939[8] could have mustered tens of thousands against Dollfuss' government.

Dollfuss modeled austrofascism after Italian fascism juxtaposed to Catholic corporatism and anti-secularism, dropping Austrian pretences of unification with Germany as long as the Nazi Party remained in power. In August 1933, Benito Mussolini's regime issued a guarantee of Austrian independence. Dollfuss also exchanged 'Secret Letters' with Mussolini about ways to guarantee Austrian independence. Mussolini was interested in Austria forming a buffer zone against Nazi Germany. Dollfuss always stressed the similarity of the regimes of Hitler in Germany and Joseph Stalin in the Soviet Union, and was convinced that Austrofascism and Italian fascism could counter totalitarian national socialism and communism in Europe.

In September 1933 Dollfuss merged his Christian Social Party with elements of other nationalist and conservative groups, including the Heimwehr, which encompassed many workers who were unhappy with the radical leadership of the socialist party, to form the Vaterländische Front, though the Heimwehr continued to exist as an independent organization until 1936, when Dollfuss' successor Kurt von Schuschnigg forcibly merged it into the Front, instead creating the unabidingly loyal Frontmiliz as paramilitary task force. Dollfuss escaped an assassination attempt in October 1933 by Rudolf Dertill, a 22-year-old who had been ejected from the military for his national socialist views.

In February 1934, Nazi agents[citation needed] in the security forces provoked arrests of Social Democrats and unjustified searches for weapons of the Social Democrats' already outlawed Republikanischer Schutzbund. After the Dollfuss dictatorship took steps against known Social Democrats, the Social Democrats called for nationwide resistance against the government. A civil war began, which lasted from February 12 until February 27. Fierce fighting took place primarily in the East of Austria, especially in the streets of some outer Vienna districts, where large fortress-like municipal workers' buildings were situated, and in the northern, industrial areas of the province of Styria, where Nazi agents[citation needed] had great interest in a bloodbath between security forces and workers' militias. The resistance was suppressed by police and military power. The Social Democrats were outlawed,[9] and their leaders were imprisoned or fled abroad.

Dollfuss staged a parliamentary session with just his party members present in April 1934 to have his new constitution approved, effectively the second constitution in the world espousing corporatist ideas (after that of the Portuguese Estado Novo).[10] The session retrospectively made all the decrees already passed since March 1933 legal. The new constitution became effective on May 1, 1934, and swept away the last remnants of democracy and the system of the first Austrian Republic.

Dollfuss was assassinated on July 25, 1934, by ten Austrian Nazis (Paul Hudl, Franz Holzweber, Otto Planetta and others)[11] of Regiment 89[12] who entered the Chancellery building and shot him in an attempted coup d'état, the July Putsch.[13] Mussolini had no hesitation in attributing the attack to the German dictator: the news reached him at Cesena, where he was examining the plans for a psychiatric hospital. The Duce personally gave the announcement to the widow, who was a guest at his villa in Riccione with children. He also put at the disposal of Ernst Rüdiger Starhemberg, who spent a holiday in Venice, a plane that allowed the prince to rush back to Vienna and to face the assailants with his militia, with the permission of President Wilhelm Miklas.[14]

Mussolini also mobilized a part of the Italian army on the Austrian border and threatened Hitler with war in the event of a German invasion of Austria to thwart the putsch. Then he announced to the world: "The independence of Austria, for which he has fallen, is a principle that has been defended and will be defended by Italy even more strenuously", and then replaced in the main square of Bolzano the statue of Walther von der Vogelweide, a Germanic troubadour, with that of Drusus, a Roman general who conquered part of Germany. This was the greatest moment of friction between Fascism and National Socialism and Mussolini himself came down several times to reaffirm the differences in the field. The assassination of Dollfuss was accompanied by uprisings in many regions in Austria, resulting in further deaths. In Carinthia, a large contingent of northern German Nazis tried to seize power but were subdued by the Italian units nearby. At first Hitler was jubilant, but the Italian reaction surprised him. Hitler became convinced that he could not face a conflict with the Western European powers, and he officially denied liability, stating his regret for the murder of the Austrian Prime Minister. He replaced the ambassador to Vienna with Franz von Papen and prevented the conspirators entering Germany, also expelling them from the Austrian Nazi Party. The Nazi assassins in Vienna, after declaring the formation of a new government under Austrian Nazi Anton Rintelen, previously exiled by Dollfuss as Austrian Ambassador to Rome, surrendered after threats from Austrian military of blowing up the Chancellery using dynamite, and were subsequently tried and executed by hanging.[15] Kurt Schuschnigg, previously Minister of Education, was appointed new chancellor of Austria after a few days, assuming the office from Dollfuss' deputy Starhemberg.

Out of a population of 6.5 million, approximately 500,000 Austrians were present at Dollfuss' burial in Vienna.[16] He is interred in the Hietzing cemetery in Vienna[17] beside his wife Alwine Dollfuss (d. 1973) and two of his children, Hannerl and Eva, all of whom were in Italy as guests of Rachele Mussolini at the time of his death, an event which saw Mussolini himself shed some tears over his slain ally.[18][19]

Dollfuss was a very short man and his diminutive stature (155 cm = 5'2"[citation needed] or 150 cm = 4'11" according to the New York Times) was the object of satire; among his nicknames were 'Millimetternich' (making a portmanteau out of millimeter and Metternich), and the "Jockey". The New York Times also reported a series of jokes, including how in the coffee houses of Vienna, one could order a "Dollfuss" cup of coffee instead of a "Short Black" cup of coffee (black being the color of the Christian Democratic political faction).

In contrast to his own diminutive stature, his personal assistant and secretary Eduard Hedvicek, who later played a significant role in the unsuccessful attempt to save his life, was a very large and tall man (2 m or 6 ft 7 in).[citation needed]

In Bertolt Brecht's 1941 play The Resistible Rise of Arturo Ui, Dollfuss is represented by the character "Dullfeet".[20]