From Infogalactic: the planetary knowledge core
Jump to: navigation, search
This article is about the political party. For the concept of a Jewish homeland, see Homeland for the Jewish people.

It was originally formed by a merger of the National Religious Party, Moledet, and Tkuma in November 2008. However, after its top representative was placed 17th on the new party's list, Moledet broke away from the party, and instead ran on a joint list with Hatikva called the National Union.[7] Tkuma also rejoined the National Union whereas the Ahi faction have joined Likud.

For the 19th Knesset Elections, The Jewish Home and Tkuma parties merged their lists under the leadership of the chairman of The Jewish Home; Naftali Bennett, Uri Bank, and his Moledet party supported the merger.[8] The other National Union members formed the Otzma LeYisrael party. The party has ministers in the cabinet of Israel. 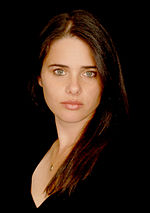 The National Religious Party and the National Union originally allied in order to run a joint list for the 2006 elections.

On 3 November 2008, it was announced that the NRP and the Moledet and Tkuma factions of the Union would merge to form a new party.[9] However, the Ahi and Hatikva factions of the Union rejected the merger — their leaders, Effi Eitam and Aryeh Eldad, respectively, were both opposed to the party being a religious one,[10] while Eitam was also unhappy that the new party would not hold primaries.[11]

Ya'akov Amidror was chosen to head a public committee formed to choose the party's list for the 2009 elections.[9] On 8 December 2008, Rabbi Professor Daniel Hershkovitz, a mathematician from the Technion, was chosen to head the new party.[13]

When Jewish Home announced its candidate list for the upcoming elections, five of the top six slots went to ex-NRP members. MK Uri Ariel of Tkuma was the sole exception: He received the third slot. Polls then indicated Jewish Home would get five to seven seats, thus making the first six spaces highly contested. The ex-National Union members again complained. Ex-Moledet MK Benny Elon stated that he would not seek re-election, and was replaced on the candidate list by American immigrant Uri Bank. The remaining Moledet members broke away and allied with Hatikva in a revived Union (Bank also later switched to the Union.)

In November 2012, the Jewish Home held separate primaries for leadership of the party. My Israel leader Naftali Bennett won over incumbent MK Zevulun Orlev, winning more than two thirds of the vote, and Orlev announced he was resigning from politics. A week later, primaries for the remaining members of the list were held, and Nissan Slomiansky, Ayelet Shaked, and Uri Orbach reached the top spots. With the National Union breaking up, Uri Ariel officially re-united Tkuma with the Jewish Home to run on a joint list in the 2013 Israeli elections. A few Moledet candidates were included. In the elections that were held on 22 January 2013, the Jewish Home won 12 seats. The Jewish Home entered the thirty-third government of Israel under prime minister Benjamin Netanyahu, and has 3 ministers (Bennett, Ariel, and Orbach) and 2 deputy-ministers (Ben-Dahan and Wortzman).

As part of its 2013 coalition agreement, the Jewish Home had the right to veto any laws that change the fragile status quo on religious issues. In December 2013, the party vetoed a Yesh Atid-proposed bill that sought to give gay fathers equal tax benefits, saying it would have far-reaching implications on marriage laws. Currently, mothers receive more benefits than do fathers under the law, and thus, couples composed of two men are ineligible for certain tax breaks.[16]

In December 2016, the party's member Shuli Mualem proposed the so-called Regulation Bill. The law seeks to legalize dozens of small outposts of settlements built in the occupied Palestinian territories on private ground of individual Palestinians.[17] The Regulation Law passed legislation on 6 February 2017.[18] The law exclusively refers to Palestinians and allows the government to expropriate land from individual Palestinians against their will for a compensation up to 25% above the land's value.[19] 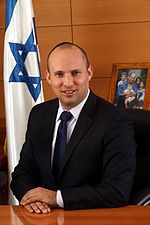 The party primarily represents Modern Orthodox Jews.[5] For many years, this community has been politically fractured and weak.[20] In the 2013 elections, the party was led by Naftali Bennett, a charismatic high-tech millionaire, who appealed to both religious and secular Israelis.[1] The party's pro-settlement message and Bennett's personal appeal helped it increase popularity among a broader segment of the population.[5] The attention that Bennett received also apparently had an effect on Likud's 2013 election strategy, pushing it to the right.[20] Along with Yesh Atid, the Jewish Home surged in popularity by promising to end the controversial system of draft exemptions given to ultra-Orthodox seminary students, and to "ease the burden" on middle class Israelis who serve in the military, work and pay taxes. These two parties became the two largest coalition parties in Prime Minister Netanyahu's government, and leaders of both parties were able to force Netanyahu to promise that the ultra-Orthodox political parties will not be in the new coalition.[21] Despite Bennett's alliance with Yesh Atid leader Yair Lapid on many domestic issues, the two differ sharply over peace efforts and settlement building. Bennett is opposed to concessions to the Palestinians, and has called for Israel to annex Area C of the West Bank and offer citizenship to the Palestinians living there.[5][22][23] Their alliance ended during their time as coalition partners, before the Israeli legislative election, 2015.

Most of the party's candidates for the 2015 elections are opposed to same-sex marriage.[24] Some of the remarks made by its candidates have been called homophobic by Yair Lapid; Zehava Gal-On and Mickey Rosenthal also criticized the comments.[25] Despite this, in a 2016 poll, 57% of Jewish Home voters said they back same-sex marriage.[26] 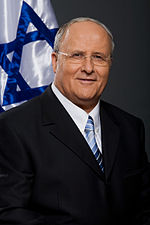 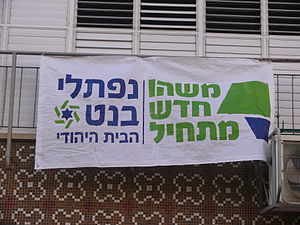