The Paradine Case is a 1947 American film noir courtroom drama film, set in England, directed by Alfred Hitchcock and produced by David O. Selznick. The screenplay was written by Selznick and an uncredited Ben Hecht, from an adaptation by Alma Reville and James Bridie of the novel by Robert Smythe Hichens.[2] The film stars Gregory Peck, Ann Todd, Alida Valli, Charles Laughton, Charles Coburn, Ethel Barrymore and Louis Jourdan. It tells of an English barrister who falls in love with a woman who is accused of murder, and how it affects his relationship with his wife. 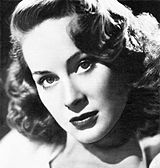 Maddalena Anna Paradine (Alida Valli) is a very beautiful and enigmatic young foreign woman, currently living in London, who is accused of poisoning her older, blind husband, a retired military man, at their grand home in the Lake District. It is not clear whether she is a grateful and devoted wife who has been falsely accused, or whether she is instead a calculating and ruthless femme fatale.

Mrs. Paradine's solicitor Sir Simon (Charles Coburn) hires Anthony Keane (Gregory Peck), a brilliant and successful barrister, to defend her in court. Although Keane has been happily married for 11 years, he instantly becomes deeply infatuated with this exotic, mysterious, and fascinating client. Keane's kind-hearted wife Gay (Ann Todd) sees his infatuation, and although her husband offers to get off the case, she presses him to continue. She knows that a guilty verdict, followed by Paradine's hanging, will mean that she will lose her husband emotionally forever. The only way that she can regain her husband's love and devotion is if he is able to obtain a "not guilty" verdict for Mrs. Paradine.

Meanwhile, Keane himself starts to focus his legal efforts on Colonel Paradine's mysterious servant, André Latour (Louis Jourdan). Consciously or unconsciously, Keane sees Latour as a suitable scapegoat on whom he can pin the crime of murder, but this strategy backfires. After Keane has pressured Latour in court, triggering an angry outburst, word comes that Latour has killed himself. Anna Paradine is coldly furious that Keane has destroyed Latour, who was in fact her lover. On the witness stand she tells Keane she hates him, and that he has murdered the only person she loved. She goes so far as to say that she poisoned her husband in order to be with Latour.

Keane is overwhelmed, physically, intellectually and emotionally. Attempting to sum up, he improvises a brief and faltering speech, admitting how poorly he has handled the case, but cannot continue speaking, and has to leave the court. He stays overnight at Sir Simon's office, feeling that his career is in ruins. His wife finds him there; she offers conciliation, and hope for the future.

David O. Selznick had purchased the rights to Robert Smythe Hichens' novel in 1933, before it was published, when Selznick was still at MGM, with Greta Garbo in mind to star – indeed, Garbo was Hichens' inspiration for the creation of "Mrs. Paradine". Garbo did consider doing the film, but ultimately turned it down, as she decided to retire from acting.[4][6] (Garbo had also turned down I Remember Mama at about the same time, and is reputed to have said "No murderesses, no mamas".[2])

Howard Estabrook was assigned to write the script at that time, and it was announced that John Barrymore, Lionel Barrymore and Diana Wynyard would star in the film. A draft of the script was submitted by MGM to the censors at the Hays Office, who warned that the script would likely be rejected since Mrs. Paradine was guilty of murder, adultery and perjury, and later committed suicide. They also objected to the judge being portrayed as a sadist who enjoyed sending people to their deaths. A new draft of the script was submitted, but not for some years, in 1942, and this script was approved. In 1946, another version was sent in, and this was also approved after the suicide was removed from the story.[4]

In 1946, it was announced that Alfred Hitchcock would direct the film, and that Laurence Olivier would star as the barrister,[4] but Olivier eventually turned the project down, as he was preparing for his production of Hamlet.[6] Hitchcock was also interested in Ronald Colman for the part, as well as Garbo (who had not yet turned down the project) or Ingrid Bergman for "Mrs. Paradine". Other actors who were considered for the film include: Maurice Evans, Joseph Cotten, Alan Marshal, James Mason for "Anthony Keane"; Hedy Lamarr for Mrs. Paradine; Claude Rains for "Lord Thomas Horfield"; and Robert Newton for Mrs. Paradine's lover.[4] In the end, Hitchcock pushed for Gregory Peck, then at the peak of his box office appeal, Ann Todd was loaned from the Rank Organisation to play his wife, and Selznick settled on Alida Valli, considered one of the most promising actresses in the Italian cinema for "Mrs. Paradine".[5]

The Paradine Case was the last film made under Hitchcock's seven-year contract with Selznick, and it has been suggested that Hitchcock was tired of the association by that time. In an interview with François Truffaut, Hitchcock said that he and his wife Alma Reville wrote the first draft of the script together, before bringing in Scottish playwright James Bridie to do a polishing – but Selznick was dissatisfied with the result, and would view the previous day's rushes, do a rewrite, and send the new scenes to the set to be shot.[4][5]

The film was in production from December 19, 1946 to May 7, 1947,[7] with retakes done in November of that year. Although some external shots show the Lake District in Cumbria, the rest of the footage was shot entirely on three sets at Selznick's Culver City, California lot a first in Selznick's career as an independent producer.[4] Selznick reportedly spared no expense:[6] the set for the courtroom scenes exactly duplicated a courtroom in London's Old Bailey, photographed, with permission, by unit manager Fred Ahern, and built in 85 days at the cost of $80,000. Unusually, the set had ceilings to allow for low camera angles.[4]

For the courtroom sequence, Hitchcock used a new technique by utilizing four cameras shooting simultaneously, each focused on one of the principal actors in the scene – multiple camera photography had been used in the past, but only to shoot the same subject.[4] This set-up, including elaborately choreographed crane shots, allowed Hitchcock to shoot long 10-minute takes, something he would push to the limit on his next two films, Rope (1948) and Under Capricorn (1949).[3]

The completed film cost an estimated $4,258,000 to make, almost as expensive as Gone with the Wind. Selznick maintained close supervision on the production, and interfered with Hitchcock's normally carefully budgeted process by insisting on extensive re-takes. When Hitchcock insisted on receiving his contractual $1000/day fee, Selznick took over post-production himself, supervising the editing and the scoring of the film.[2]

The Paradine Case had its world premiere in Los Angeles on December 29, 1947, opening simultaneously in two theatres across the street from each other in Westwood.[4] It then had its New York City premiere on January 8, 1948.[4][8][9] On its initial release, the film was 132 minutes long, due to Selznick's editing of Hitchcock's rough cut, which ran almost three hours. After the film's premieres, Selznick pulled the film from distribution and re-cut it for general release, bringing it down to 114 minutes, which is currently the length of the film on DVD release. In 1980, a flood reportedly destroyed the uncut original version of the film, making a restoration of that version unlikely.[2]

The Paradine Case was not a box office success: worldwide receipts barely covered half of the cost of production.[5]

Almost every Hitchock film, of course, has a cameo appearance by Alfred Hitchcock. In this film, he can be seen leaving the Cumberland train station, carrying a cello, at about 38 minutes into the film.

Hitchcock described The Paradine Case as "...a love story embedded in the emotional quicksand of a murder trial".

Bosley Crowther, film critic for The New York Times, liked the film, the acting, and Hitchcock's direction, and wrote, "With all the skill in presentation for which both gentlemen are famed, David O. Selznick and Alfred Hitchcock have put upon the screen a slick piece of static entertainment in their garrulous The Paradine Case ... Gregory Peck is impressively impassioned as the famous young London barrister who lets his heart, cruelly captured by his client, rule his head. And Ann Todd, the pliant British actress, is attractively anguished as his wife. Alida Valli, an import from Italy, makes the caged Mrs. Paradine a compound of mystery, fascination and voluptuousness with a pair of bedroom eyes, and Louis Jourdan, a new boy from Paris, is electric as the badgered valet."[10]

Despite the mixed reviews the movie received, most critics noted the strong performances of Ann Todd and Joan Tetzel.

Ethel Barrymore was nominated for a 1947 Oscar for Best Supporting Actress as Lady Sophie Horfield, but lost to Celeste Holm in Gentleman's Agreement.[11]

Lux Radio Theatre broadcast a radio adaptation of the film on 9 May 1949, starring Joseph Cotten, with Alida Valli and Louis Jourdan reprising their roles.[4]