From Infogalactic: the planetary knowledge core
Jump to: navigation, search
The Second Coming

Turning and turning in the widening gyre
The falcon cannot hear the falconer;
Things fall apart; the centre cannot hold;
Mere anarchy is loosed upon the world,
The blood-dimmed tide is loosed, and everywhere
The ceremony of innocence is drowned;
The best lack all conviction, while the worst
Are full of passionate intensity.

Surely some revelation is at hand;
Surely the Second Coming is at hand.
The Second Coming! Hardly are those words out
When a vast image out of Spiritus Mundi
Troubles my sight: somewhere in sands of the desert
A shape with lion body and the head of a man,
A gaze blank and pitiless as the sun,
Is moving its slow thighs, while all about it
Reel shadows of the indignant desert birds.
The darkness drops again; but now I know
That twenty centuries of stony sleep
Were vexed to nightmare by a rocking cradle,
And what rough beast, its hour come round at last,
Slouches towards Bethlehem to be born? 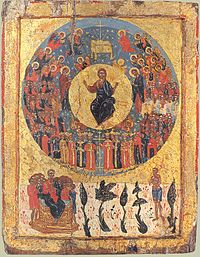 The Second Coming is a poem composed by Irish poet W. B. Yeats in 1919, first printed in The Dial in November 1920, and afterwards included in his 1921 collection of verses Michael Robartes and the Dancer. The poem uses Christian imagery regarding the Apocalypse and second coming allegorically to describe the atmosphere of post-war Europe.[1] The poem is considered a major work of Modernist poetry and has been reprinted in several collections, including The Norton Anthology of Modern Poetry.[2]

The poem was written in 1919 in the aftermath of the First World War[3] and was at first entitled "The Second Birth".

"The Second Coming" contains images that have been tied most closely to Yeats's legacy. Modernists read the poem as a dirge for the decline of European civilization in the mode of Eliot, but later critics have pointed out that it expresses Yeats's apocalyptic mystical theories, and it is thus the expression of a mind shaped by the 1890s. His most important collections of poetry started with The Green Helmet (1910) and Responsibilities (1914). Yeats's images in his poetry became sparer and more powerful as he grew older. The Tower (1928), The Winding Stair (1929), and New Poems (1938) contained some of the most potent images in twentieth-century poetry.

Turning and turning in the widening gyre
The falcon cannot hear the falconer;
Things fall apart; the centre cannot hold;
Mere anarchy is loosed upon the world,
The blood-dimmed tide is loosed, and everywhere
The ceremony of innocence is drowned.
The best lack all conviction, while the worst
Are full of passionate intensity.[4]

Here, Yeats incorporates his ideas on the gyre—a historical cycle of about 2000 years. He first published this idea in his writing 'a vision' which predicted the expected anarchy that would be released around 2000 years after the birth of Christ. The gyre suggests the image of a world spinning outwardly such that it cannot recall its own origin. These anxieties are closely tied to the traumas of a continent at war, and the rise of industrialism and militarism on a global scale.

According to some interpretations, "the beast" referred to the traditional ruling classes of Europe who were unable to protect the traditional culture of Europe from materialistic mass movements. The concluding lines refer to Yeats's belief that history was cyclical, and that his age represented the end of the cycle that began with the rise of Christianity:

And what rough beast, its hour come round at last,
Slouches towards Bethlehem to be born?[5]

This poem marks the transition into Yeats's final period in which he muses on the role of the poet at the closing of an era. He returns to earlier themes of mysticism, turning inward, asking questions about the self, mortality, and legacy, as exemplified by his collection, The Tower.