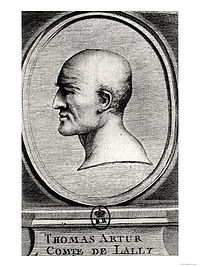 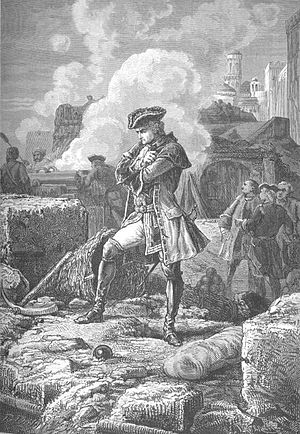 Lally at Pondicherry, by Paul Philipotteaux.

Thomas Arthur, comte de Lally, baron de Tollendal (January 1702 – 6 May 1766) was a French General of Irish Jacobite ancestry. Lally commanded French forces, including two battalions of his own red-coated Regiment of Lally of the Irish Brigade, in India during the Seven Years' War. After a failed attempt to capture Madras he lost the Battle of Wandiwash to British forces under Eyre Coote and then was forced to surrender the remaining French post at Pondicherry. After a time spent as a prisoner of war in Britain, Lally voluntarily returned to France to face charges where he was beheaded for his alleged failures in India. Ultimately the jealousies and disloyalties of other officers, together with insufficient resources and limited naval support prevented Lally from securing India for France. In 1778, he was publicly exonerated by Louis XVI of his alleged crime.

He was born at Romans-sur-Isère, Dauphiné, the son of Sir Gerald Lally, an Irish Jacobite from Tuam, County Galway, who married a French lady of noble family. His title is derived from the Lally's ancestral home, Castel Tullendally in Co. Galway where the Lally's (originally called O'Mullallys) were prominent members of the Gaelic Aristocracy who could trace their ancestry back to the second century High King of Ireland, 'Conn of the Hundred battles.'

Entering the French army in 1721 he served in the war of 1734 against Austria; he was present at Dettingen (1743), and commanded the regiment de Lally in the famous Irish brigade at Fontenoy (May 1745). He was made a brigadier on the field by Louis XV.

He was a staunch Jacobite and in 1745 accompanied Charles Edward to Scotland, serving as aide-de-camp at the battle of Falkirk (January 1746). Escaping to France, he served with Marshal Saxe in the Low Countries, and at the capture of Maastricht (1748) was made a maréchal de camp.

When war broke out with Britain in 1756 Lally was appointed governor-general of French India and commanded a French expedition, made up of four battalions, of whom two were from his own Regiment of Lally of the Irish Briggade, to India. He reached Pondicherry in April 1758, and within six weeks had pushed the British back from the coast to Madras (in modern day Chennai), the headquarters of the English East India Company.

He was a man of courage and a capable general; but his pride and ferocity made him unpopular with his officers and men. He was unsuccessful in an attack on Tanjore, and as he lacked French naval support he had to retire from the Siege of Madras (1758) owing to the timely arrival of the British fleet. He was defeated by Sir Eyre Coote at the Battle of Wandiwash (1760), and besieged in Pondicherry, where he was forced to capitulate in 1761.[1] 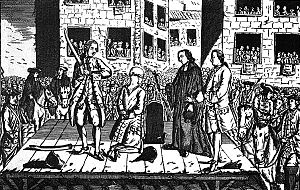 Lally was sent as a prisoner of war to England. While in London, he heard that he was accused in France of treason, and insisted, against advice, on returning on parole to stand his trial. He was kept prisoner for nearly two years before the trial began; then, after many painful delays, he was sentenced to death on May 6, 1766, and three days later beheaded. Louis XV tried to throw the responsibility for what was undoubtedly a judicial murder on his ministers and the public, but his policy needed a scapegoat, and he was probably well content not to exercise his authority to save an almost friendless foreigner. The case became highly controversial and Voltaire dedicated himself to clearing the condemned man's name.

In volume one of his French Revolution, Thomas Carlyle describes the death of Lally as a judicial murder, reporting that Lally was driven to execution gagged to prevent his crying out against the injustice, and that when Lally's son came of age, he sought to have his father's name cleared in the Parlement de Paris. The orator Despreminil acted as spokesman of Parlement and refused to consider any repentance, much to his discredit in Carlyle's opinion, however Lally's name was eventually cleared.

See GB Malleson, The Career of Count Lally (1865); "Z's" (the marquis de Lally-Tollendal) article in the Biographie Michaud; and Voltaire's Œuvres complètes. The legal documents are preserved in the Bibliothèque Nationale.