From Infogalactic: the planetary knowledge core
Jump to: navigation, search
For the racehorse, see Timoleon (horse). 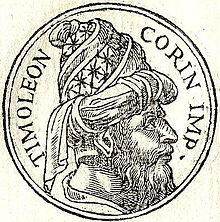 Timoleon (Greek: Τιμολέων), son of Timodemus, of Corinth (c. 411–337 BC) was a Greek statesman and general.

As the champion of Greece against Carthage he is closely connected with the history of Sicily, especially Syracuse.

In the mid 360s BC, Timophanes, the brother of Timoleon took possession of the acropolis of Corinth and effectively made himself tyrant of the city. In response, Timoleon, who had earlier saved his brother's life in battle, became involved in the assassination of Timophanes.[1] Public opinion approved his conduct as patriotic; however the curses of his mother and the indignation of some of his kinsfolk drove him into an early retirement for twenty years.[2] 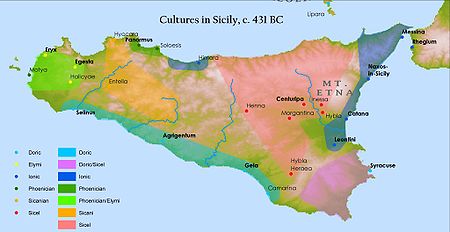 Because of the political problems facing Syracuse and the threat from Sparta, a group of Syracusans sent an appeal for help to Corinth which reached the city state in 344 BC.[3] Corinth could not refuse help, though her chief citizens declined to accept responsibility for attempting to establish a stable government in fractious and turbulent Syracuse.[2]

Timoleon, being named by an unknown voice in the Corinthian popular assembly, was chosen by a unanimous vote to undertake the mission, and set sail for Sicily with seven ships, a few of the leading citizens of Corinth and 700 Greek mercenaries.[1] He eluded a Carthaginian squadron and landed at Tauromenium (now Taormina) in 344 BC, where he met with a friendly reception. At this time Hicetas, tyrant of Leontini, was master of Syracuse, with the exception of the island of Ortygia, which was occupied by Dionysius, still nominally tyrant.

Hicetas was defeated by Timoleon at Adranum, an inland town, and driven back to Syracuse. Timoleon was sent reinforcements from Corinth and other north-western Greek states.[1] During the siege of Syracuse, Dionysius surrendered Ortygia in 343 BC on the condition of his being granted a safe conduct to Corinth. This was agreed and Dionysius was sent to exile in Corinth.[2]

Hicetas now received help from Carthage (60,000 men), but ill-success roused mutual suspicion; the Carthaginians abandoned Hicetas, who was besieged in Leontini, and who was then compelled to surrender. Timoleon was thus master of Syracuse.[2]

He at once began the work of restoration, bringing new settlers from the mother-city and from Greece generally, and establishing a popular government on the basis of the democratic laws of Diocles. The citadel was razed to the ground, and a court of justice erected on its site. The amphi-polos, or priest of Olympian Zeus, who was annually chosen by lot out of three clans, was invested with the chief magistracy. The impress of Timoleon's reforms seems to have lasted to the days of Augustus.[2]

Hicetas was able to persuade Carthage to send (340–339 BC) a great army (70,000 men), which landed at Lilybaeum (now Marsala). With a miscellaneous levy of about 12,000 men, most of them mercenaries, Timoleon marched westwards across the island to the neighbourhood of Selinus and won a great and decisive victory on the Crimissus. Timoleon led his infantry, and the enemy's discomfiture was completed by a blinding storm of rain and hail.[2]

Carthage made one more effort and despatched some mercenaries to prolong the conflict between Timoleon and the tyrants. But it ended in the defeat of Hicetas, who was taken prisoner and put to death. Carthage then agreed to a treaty in 338 BC by which Carthage was confined in Sicily to the west of the Halycus (Platani) and undertook to give no further help to the Sicilian tyrants. Most of the remaining tyrants were killed or expelled.[4] This treaty gave the Greeks of Sicily many years of peace and safety from Carthage.

Timoleon established a new Syracusan constitution. It was described at the time as democratic. However, he did have wide powers equivalent to a supreme commander. He invited settlers from mainland Greece to assist in the re-population of Syracuse and other Sicilian cities. During this period, Greek Sicily enjoyed a recovery in its economy and its culture.[1]

Timoleon retired into private life after he became blind some time before his death, but when important issues were under discussion he was carried to the assembly to give his opinion, which was usually accepted.[4] He was buried at the cost of the citizens of Syracuse, who erected a monument to his memory in their market-place, afterwards surrounded with porticoes, and a gymnasium called Timoleonteum.[2]

The ancient historian Timaeus gave Timoleon high accolades in his work. However, Polybius criticized Timaeus for bias in favour of Timoleon and many modern historians have sided with Polybius.[5] Peter Green shares this scepticism but thinks it has gone too far. While he concedes that Timoleon tended to play the democrat while using the methods of a tyrant (albeit benevolently), he did make an effort to maintain the outward forms of democracy. Further, he reformed Syracuse in a democratic direction and demolished the stronghold of the island that had been so useful to tyrants in the past.[6]