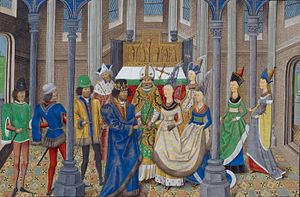 Marriage of John I, King of Portugal and Philippa of Lancaster, daughter of John of Gaunt, 1st Duke of Lancaster.

The Treaty of Windsor is the diplomatic alliance signed between Portugal and England on 9 May 1386[1] at Windsor and sealed by the marriage of King John I of Portugal (House of Aviz) to Philippa of Lancaster, daughter of John of Gaunt, 1st Duke of Lancaster. With the victory at the Battle of Aljubarrota, John I was recognized as the undisputed King of Portugal, putting an end to the interregnum of the 1383–1385 Crisis.The Treaty of Windsor established a pact of mutual support between the countries. This document is preserved at the Portuguese National Archives.[2]

Historian Matthew Winsett says, "This treaty has been the cornerstone of both nations' relations with each other ever since."[3]