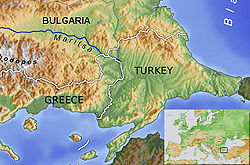 The region of Thrace.

According to the Greek census of 1991, there were approximately 50,000 Turks in Western Thrace, out of the approximately 98,000 strong Muslim minority of Greece.[1] Other sources estimate the size of the Turkish community between 120,000 and 130,000.[2][3] The Turks of Western Thrace are not to be confused with Pomaks nor with Muslim Roma people of the same region, counting 35% and 15% of the Muslim minority respectively.[4][5]

The Greek government has adopted a policy of not referring to the Turkish community specifically, and instead refers to the entire Muslim minority which includes Pomaks and Roma Muslims, and does not recognize a separate Turkish minority in Western Thrace,[2] instead referring to the whole Muslim minority as "Greek Muslims". The fundamental rights of the Turks of East Macedonia and Thrace are enshrined in the Greek constitution and the Treaty of Lausanne with Turkey, which states Greece's obligations to its Muslim minority.

Parts of Western Thrace were overrun by the expanding Ottoman Empire in 1354 and remained in Ottoman control until 1913. At this year, the Turkish community outnumbered the Greek community four to one and owned close to 84% of the land. By August 31, 1913 the Turks of Western Thrace had formed the first 'Turkish republic', the Provisional Government of Western Thrace.[6] However, it was taken over by the Kingdom of Bulgaria on October 25, 1913, which had been victorious in the First Balkan War. France occupied the area at the end of the First World War, following the defeat of Bulgaria, and it passed into Greek hands under the Treaty of Sèvres in August 1920.[7] Under a protocol of the same year, the Turks of Western Thrace were exempted from the 1922-1923 exchange of populations agreement between Greece and Turkey and were granted rights within the framework of the Lausanne Treaty. However, since 1923, between 300,000 to 400,000 Turks have left Western Thrace most of which have immigrated to Turkey.[8][9] It should be emphasised that the actual Ottoman-era Greek Muslims of Macedonia had been included among those 'Turks' expatriated to Turkey in 1924. including the Vallahades. In contrast, the Western Thrace Turks are completely distinct from those referred to as Greek Muslims and were exempt from the terms of the population exchange.

A number of estimates and censuses during the 1912-1920 period gave the following results about the ethnic distribution of the area that would become known as Western Thrace:[10]

According to the Turkish thesis, as it was presented at Lausanne Peace Conference (1920), the general distribution of population in Western Thrace was as follows:[11]

During Ottoman rule before 1912, Greeks constituted a minority in the region of Western Thrace.[12] After the Balkan Wars and World War I the demography of the region was changed. While groups such as the Turks and Bulgarians decreased, the Greek population increased by the resettlement of ten thousands of Greek refugees from other areas of the Ottoman Empire, after the flight of the Greek refugees from Asia Minor, as a result of the Greco-Turkish War (1919-1922) and the subsequent population exchange between Greece and Turkey.[13] Of all Greek Asia Minor refugees (578,824 individuals), 31% of them were resettled in Western Thrace.[14] The Greek government's reason to settle the refugees in this region was to strengthen the Greek presence in the newly acquired provinces and the homogenization of the population.[14] The Greek government especially resettled the refugees in Komotini, Xanthi and Sapes regions where the majority of Muslim Turks lived.[14]

The Turkish community has a strong presence in the Komotini (Turkish: Gümülcine) and Xanthi (Turkish: İskeçe) departments of East Macedonia and Thrace, while it is scarcely present in the Evros prefecture, the closest to the international boundary with Turkey. According to estimates, Muslims as a whole, represented 36-38% of the Rhodopi Department population, 12-24% in the Xanthi Department and less than 5% in the Evros Department.[15]

According to Ethnologue, in 1976 the Turkish language was spoken by 128,000 people in Greece, the majority of which are located in the Western Thrace portion of the province of East Macedonia and Thrace.[16] However, the Greek language is also widely used.[citation needed]

Obligations of the Treaty of Lausanne

Article 37 through 45 of the Lausanne Treaty set forth the obligations of the Greek and Turkish governments to protect the Turkish and Greek minorities in their territories. Each country agreed to provide the following:[18]

The Lausanne Treaty defined the rights of the Muslim communities in Western Thrace, on the basis of religion, not ethnicity, as well as maintained a balance between the minority communities of both countries (Turks in Greece and Greeks in Turkey) on reciprocal obligations toward each of those minorities. The Treaty contained specific obligations for their cultural and religious rights. These have been largely respected, in contrast to measures taken by successive Turkish governments against the Greek minority in Turkey (like forced labor battalions, the Istanbul pogrom and Varlik Vergisi), a minority that is nearly eliminated today (70,000 in 1923 to 3,000 in 2000).[19]

Members of the Greek Parliament

In 1990 a new electoral law was enacted in Greece, which set a threshold of at least 3% of the nationwide vote for a party to be represented in the parliament. Consequently, independent Turkish MPs were barred from election at the 1993 elections. Since then the Turkish minority in the Hellenic Parliament has been represented by Turkish deputies belonging to nationwide political parties, and the Party of Friendship, Equality and Peace, which succeeded the Independent Muslim List in 1991, practically disappeared from the electoral scene.[20]

There are presently two Turkish MPs from the Western Thrace portion of East Macedonia and Thrace, both of whom are affiliated to the Panhellenic Socialist Movement: Tsetin Mantatzi (Xanthi) and Achmet Hatziosman (Rhodope), former president (1999–2007) of the Party of Friendship, Equality and Peace created by former (1989) MP Sadik Achmet in 1991.[23]

At least 14 candidates from the Turkish minority have been nominated, mainly in Rhodope and Xanthi.[24]

For New Democracy, former MP (2004–2007) Ilchan Achmet and Achmet Achmet are candidates in Rhodope,[25] and in Xanthi Aisel Zeimpek and Achmet Mpountour.[26] Zeimpek had lost her Greek citizenship under Article 19 of the Greek Citizenship Code, which allowed of its revocation for non-ethnic Greeks who left the country.[27] After a lengthy legal battle, she finally won her case with a second appeal before the European Court of Human Rights and re-secured her Greek citizenship in 2001.

For the KKE (which presently has no MP in Xanthi or Rhodope), Faik Faik in Rhodope and Chasan Efendi in Xanthi.

For SYRIZA (which presently has no MP in Xanthi or Rhodope), Chasan Malkots and Chousein Zeimpek are candidates in Xanthi,[29] and in Rhodope[30] Dr. Moustafa Moustafa (former MP) and Tzelalentin Giourtsou.[31]

According to the former Article 19 of the 1955 Citizenship Law (No. 3370), a person of non-Greek ethnic origin leaving Greece without the intention of returning may be declared as having lost Greek nationality. According to the Greek government, between 1955 and 1998, approximately 60,000 Greek Muslim individuals, predominantly Turkish, were deprived of their citizenship under Article 19. Of these 60,000, approximately 7,182 lost their citizenship between 1981 and 1997.[32] The application of this law to the Turks of Western Thrace was a retaliatory measure in response to the devastating state-sponsored pogrom which targeted the Greeks of Istanbul in September 1955.[33] The pogrom precipitated an exodus of ethnic Greeks from Turkey. Article 19 was repealed in 1998, though not retroactively.[32]

Since the Treaty of Lausanne used the criterion of religion to refer to the ethnic communities, Greek Government spokesmen have usually insisted that the basis of identification is religious and not ethnic (or national).[34] Thus Greek officials confusingly refer to the Muslim minority in Greece as Greek Muslims. Greek Muslims were based mainly in western Greek Macedonia, Epirus, and Crete (see Cretan Turks) and were the descendants of Ottoman-era Greek converts to Islam who joined the Turkish Millet (Ottoman Empire). However, this particular community of Greek Muslims disappeared from Greece following the Population exchange between Greece and Turkey in 1922-23. Successive Greek government policy was to deny the existence of an actual Turkish minority in Northern Greece and to insist on referring to Western Thrace Turks as also being Greek Muslims, falsely suggesting that they were not of Turkish origin but were the descendants of Ottoman-era Greek converts to Islam like the Vallahades and other Greek Muslims of Greek Macedonia.[35][36][37] This policy was introduced immediately after the unilateral declaration of independence of the Turkish Republic of Northern Cyprus in 1983 on lands that once had an 82% Greek majority before becoming refugees during the Turkish invasion in 1974. The Greek government declared that it was a measure to avert the possibility of Greek East Macedonia and Thrace becoming a "second Cyprus" sometime in the future or of being ceded to Turkey on the basis of the ethnic origin of its Muslim inhabitants.[38]

More than 10 newspapers are issued in the Turkish language. According to some sources, newspapers, magazines and books published in Turkey are not allowed entry into Western Thrace,[41] and Turkish television and radio stations are sometimes jammed.[42] According to other sources the minority has full and independent access to its own newspapers radio, television, and other written media coming from Turkey, regardless of their content.[43]

According to the Lausanne Treaty, the Turkish minority is entitled to freedom of religion and to the right to control charitable and religious institutions. However, the Turkish community believes that these international law guarantees have been violated by the Greek government[44] by denying permission to repair or rebuild old mosques or to build new mosques, by denying the right to choose the muftis (this chief religious officers), and by efforts to control the Turkish communities charitable foundations.[45] According to another source, more than 5 new mosques are being built in the prefecture of Xanthi alone and 19 new mosques are being built in the prefecture of Rhodope alone, while in the same prefecture the number of mosques exceeds 160.[46]

According to a report by a local organization there have been frequent (six in 2010 and three in the first months of 2011) attacks against the private and public property of Turks in Western Thrace. Among the recent incidents are three in 2010 (in Kahveci, Kırmahalle, Popos and Ifestos at Komotini) where attackers desecrated Turkish cemeteries and broke tombstones. There were also attacks against mosques, Turkish associations and Turkish consulates, attackers used methods like throwing stones, molotov bombs and damaging buildings.[47][48][49][50][51]

There are some members of the Greek Muslim community among the some 350,000 Greeks living in Germany who are Turks or who espouse a Turkish identity.[55] The majority of Turks immigrated from Western Thrace.[56] In the 1960s and 1970s, the Thracian tobacco industry was affected by a severe crisis and many tobacco growers lost their income. This resulted in many Turks leaving their homes and immigrating to Germany with estimates suggesting that today there are now between 12,000[57] and 25,000[58] residing in Germany.

See also: Turks in the Netherlands

A minority of Western Thrace Turks can be found in the Netherlands, especially in the Randstad region; after Germany, the Netherlands is the most popular destination for Turkish immigrants.[59]

See also: Turks in the United Kingdom and Turks in London