Resolution 1441 stated that Iraq was in material breach of the ceasefire terms presented under the terms of Resolution 687. Iraq's breaches related not only to weapons of mass destruction (WMD), but also the known construction of prohibited types of missiles, the purchase and import of prohibited armaments, and the continuing refusal of Iraq to compensate Kuwait for the widespread looting conducted by its troops during the 1990–1991 invasion and occupation. It also stated that "...false statements or omissions in the declarations submitted by Iraq pursuant to this resolution and failure by Iraq at any time to comply with, and cooperate fully in the implementation of, this resolution shall constitute a further material breach of Iraq's obligations." 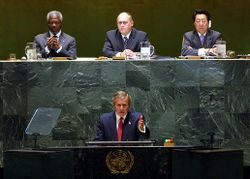 George W. Bush addressed the General Assembly on 12 September 2002 to outline the complaints of the United States against the Iraqi government.

On 12 September 2002, U.S. President George W. Bush addressed the General Assembly and outlined a catalogue of complaints against the Iraqi government.[2] These included:

Following the speech, intensive negotiations began with other members of the Security Council. In particular, three permanent members (with veto power) of the Council were known to have misgivings about an invasion of Iraq: Russia, China, and France.

In the meantime, Iraq, while denying all charges, announced that it would permit the re-entry of United Nations arms inspectors into Iraq. The United States characterized this as a ploy by Iraq and continued to call for a Security Council resolution which would authorize the use of military force.[citation needed]

The resolution text was drafted jointly by the United States and the United Kingdom, the result of eight weeks of tumultuous negotiations, particularly with Russia and France. France questioned the phrase "serious consequences" and stated repeatedly that any "material breach" found by the inspectors should not automatically lead to war; instead the UN should pass another resolution deciding on the course of action. In favour of this view is the fact that previous resolutions legitimizing war under Chapter VII used much stronger terms, like "...all necessary means..." in Resolution 678 in 1990 and that Resolution 1441 stated that the Security Council shall "remain seized of the matter."

On 8 November 2002, the Security Council passed Resolution 1441 by a unanimous 15–0 vote; Russia, China, France, and Arab states such as Syria voted in favor, giving Resolution 1441 wider support than even the 1990 Gulf War resolution.

While some politicians have argued that the resolution could authorize war under certain circumstances, the representatives in the meeting were clear that this was not the case. The United States Ambassador to the United Nations, John Negroponte, said:

The ambassador for the United Kingdom, the co-sponsor of the resolution, said:

The message was further confirmed by the ambassador for Syria:

Iraq agreed to the Resolution on 13 November.[citation needed] Weapons inspectors returned on 27 November, led by Hans Blix of UNMOVIC and Mohamed ElBaradei of the International Atomic Energy Agency. The inspectors had been absent from Iraq since December 1998 when they were withdrawn immediately prior to Operation Desert Fox.

Inspectors began visiting sites where WMD production was suspected, but found no evidence of such activities, except for 18 undeclared 122mm chemical rockets that were destroyed under UNMOVIC supervision.[6] As was discovered after the invasion of Iraq, no production of WMDs was taking place, and no stockpiles existed. U.N. inspectors also found that the Al-Samoud 2 and Al-fatah missiles violated U.N. range restrictions, the former also being partially destroyed under UNMOVIC supervision. Debate about Resolution 1441 therefore turns on whether, despite the absence of WMDs and the acceptance of inspections, Iraq failed to comply with the terms of the Resolution, and whether an invasion was justified in the absence of any further UN Security resolutions on the subject.

On 7 December 2002, Iraq filed its 12,000-page weapons declaration with the UN in order to meet requirements for this resolution. The five permanent members of the Security Council received unedited versions of the report, while an edited version was made available for other UN Member States. On 19 December, Hans Blix reported before the United Nations and stated in regards to Iraq's 7 December report (unedited version): "During the period 1991–1998, Iraq submitted many declarations called full, final and complete. Regrettably, much in these declarations proved inaccurate or incomplete or was unsupported or contradicted by evidence. In such cases, no confidence can arise that proscribed programmes or items have been eliminated." By March, Blix declared that the 7 December report had not brought any new documentary evidence to light.

Iraq continued to fail to account for substantial chemical and biological stockpiles which UNMOVIC inspectors had confirmed as existing as late as 1998. Iraq claimed that it had disposed of its anthrax stockpiles at a specific site, but UNMOVIC found this impossible to confirm since Iraq had not allowed the destruction to be witnessed by inspectors as required by the pertinent Resolutions. Chemical testing done at the site was unable to show that any anthrax had been destroyed there.

Hans Blix and Mohamed ElBaradei presented several reports to the UN detailing Iraq's level of compliance with Resolution 1441.[7][8][9] On 27 January 2003 Chief UN Weapons Inspector Blix addressed the UN Security Council and stated "Iraq appears not to have come to a genuine acceptance–not even today–of the disarmament, which was demanded of it and which it needs to carry out to win the confidence of the world and to live in peace."[7] Blix went on to state that the Iraqi regime had allegedly misplaced "1,000 tonnes" of VX nerve agent—one of the most toxic ever developed.[7]

By mid-February the issues of anthrax, the nerve agent VX and long-range missiles remained unresolved. Blix's 7 March report stated "Iraq, with a highly developed administrative system, should be able to provide more documentary evidence about its proscribed weapons programmes. Only a few new such documents have come to light so far and been handed over since we began inspections."

At this point, the US Administration asserted that Iraq remained in material breach of the UN Resolutions, and that, under 1441, this meant the Security Council had to convene immediately "in order to consider the situation and the need for full compliance with all of the relevant Council resolutions in order to secure international peace and security".

Before the meeting took place, French president Jacques Chirac declared on 10 March that France would veto any resolution which would automatically lead to war. This caused open displays of dismay by the U.S. and British governments. The drive by Britain for unanimity and a "second resolution" was effectively abandoned at that point.

In the leadup to the meeting, it became apparent that a majority of UNSC members would oppose any resolution leading to war. As a result, no such resolution was put to the Council.

At the Azores conference of 16 March, Tony Blair, George W. Bush, Spanish prime minister José María Aznar as well as Portuguese prime minister José Manuel Barroso who hosted the meeting, announced the imminent deadline of 17 March for complete Iraqi compliance, with statements such as "Tomorrow is a moment of truth for the world". On the 17th, speeches by Bush and UK Foreign Secretary Jack Straw explicitly declared the period of diplomacy to be over, as declared by Resolution 1441's prohibition on giving Iraq new opportunities for compliance, and that no further authorization from the UN would be sought before an invasion of Iraq (see 2003 invasion of Iraq). The USA and Britain, while admitting that such a resolution was diplomatically desirable, insisted that Iraq had now been given enough time (noting also the time since the first disarmament resolutions of 1991) to disarm or provide evidence thereof, and that war was legitimized by 1441 and previous UN resolutions. Non-permanent Security Council member Spain declared itself with the USA and Britain. Nevertheless, this position taken by the Bush administration and its supporters, has been and still is being disputed by numerous legal experts. According to most members of the Security Council, it is up to the council itself, and not individual members, to determine how the body's resolutions are to be enforced.[10][11][12]

More information is found in United Nations actions regarding Iraq.

In June 2006, the National Ground Intelligence Center (NGIC), a US Department of Defense entity, released a report detailing the weapons of mass destruction that had been found in Iraq, including pre-1991 sarin gas and mustard agent. The report stated that, "While agents degrade over time, chemical warfare agents remain hazardous and potentially lethal."[13]

The Bush administration commissioned the Iraq Survey Group to determine whether in fact any WMD existed in Iraq. After a year and half of meticulously combing through the country, the administration’s own inspectors reported:[14]

The review was conducted by Charles A. Duelfer and the Iraq Survey Group. In October 2004, Bush said of Duelfer’s analysis:[15] "The chief weapons inspector, Charles Duelfer, has now issued a comprehensive report that confirms the earlier conclusion of David Kay that Iraq did not have the weapons that our intelligence believed were there."

Factual questions about the Iraqi declaration still remain. To date the contents have still not been made public for independent scrutiny.[16] When the UK government was asked to state where in the Iraqi government's declaration there were false or inaccurate statements, the reply was that it was a confidential matter and that "huge quantities of documents remain to be translated."[17]