Today, large portions of slip laws denominated as public laws are now drafted as amendments to the United States Code. Once enacted into law, an Act will be published in the Statutes at Large and will add to, modify, or delete some part of the United States Code. Provisions of a public law that contains only enacting clauses, effective dates, and similar matters are not generally codified. Private laws also are not generally codified. 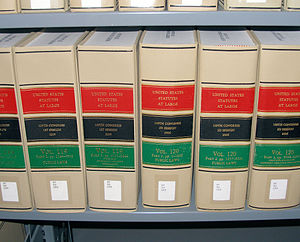 A few volumes of the Statutes at Large

In 1874, Congress transferred the authority to publish the Statutes at Large to the Government Printing Office under the direction of the Secretary of State.

Until 1948, all treaties and international agreements approved by the United States Senate were also published in the set, but these now appear in a publication titled United States Treaties and Other International Agreements, abbreviated U.S.T. In addition, the Statutes at Large includes the text of the Declaration of Independence, Articles of Confederation, the Constitution, amendments to the Constitution, treaties with Indians and foreign nations, and presidential proclamations.