The campus' incumbent chairman is Ahmad Rithauddeen, an honorary Nottingham graduate and former Malaysian Defence Minister. The present campus at Semenyih was officially opened by then Deputy Prime Minister Najib Tun Razak, an alumnus himself, on 26 September 2005. The campus was made possible by a consortium of partners which includes the Lembaga Tabung Angkatan Tentera or Armed Forces Superannuation Fund (LTAT) via its subsidiary Boustead Holdings Bhd, YTL Corporation Bhd and the University of Nottingham and the Alumni Association.[13]

Prior to the opening of the main campus in Semenyih, the university operated at the former Majestic Hotel building near Kuala Lumpur Railway Station and at Wisma MISC or MISC Tower. Following the opening of the Semenyih campus, most of the teaching departments were moved to Semenyih, only certain post graduate courses still remain in Kuala Lumpur. In 2007 the campus reopened a Kuala Lumpur branch in Chulan Tower on Jalan Conlay.[citation needed] 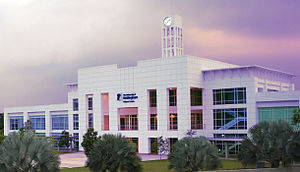 The Malaysia campus is primarily based on a 101-acre (0.41 km2) plot situated in Semenyih, Selangor.

The campus is equipped with student recreational facilities such as a sports complex which houses an outdoor 25m swimming pool, two tennis courts, six basketball courts, a multi purpose hall, a 60m² gym, hockey/futsal field, a frisbee court, a dodgeball arena and a football field. A students association building forms the connection between on-campus housing and the teaching buildings.

The campus has two research centres.

Besides the main campus in Semenyih, a city teaching facility is maintained in Chulan Tower in Kuala Lumpur's central business district. Postgraduate programmes, such as applied psychology, business and management, are taught at the KL Teaching Centre.

Being a satellite campus of the University of Nottingham, students are taught with the same course materials as those in the UK and in China and are under the jurisdiction of the Quality Assurance Agency for Higher Education (QAA).[14] Upon completing a degree at the Malaysia campus, students are awarded a University of Nottingham degree certificate which is indistinguishable from the certificates awarded at the Nottingham campus. The degrees that are awarded are accredited by international professional bodies such as the Association of MBAs and the UK Engineering Council.

The excellent Engineering Degree courses are accredited by the Board of Engineering Malaysia (BEM).

The university's career office and the Wall Street Society co-organized numerous company talks and at least one career fair each year. The career office also organised workshops to teach students how to present themselves during interviews, how to write a winning CV etc. Many of its graduates join some of the most prestigious companies located in Kuala Lumpur, such as Shell, Petronas, CIMB, MayBank, Affin Investment Bank, Securities Commission, Accenture, Roland Berger, Boston Consulting Group, Nestle and P&G.

For students who are interested in academia, the university also prepares them well for postgraduate studies both locally and overseas, such as University of Malaya, University of Oxford, Imperial College London, and University of Nottingham, UK. In recent years, there is also an increasing number of its students going to the United States for further studies.

Apart from the taught undergraduate and postgraduate programmes, the university conducts projects for research-based postgraduate studies. There are more than 20 research programmes being carried out at the Malaysia Campus. This has led to joint research and the setting up of local companies.

The Sahz-UNMC Pilot Plant is a small prototype manufacturing plant built inside the engineering faculty building (D-Building) occupying a space of no greater than 25 square metres (270 sq ft). Research is focused towards mass fabricating supercapacitors. Funding for this project is granted from a RM6.5 million Technofund grant by the Ministry of Science, Technology & Innovation (MOSTI). The research project also has links with SEMYUNG Ever Energy Co. Ltd. (South Korea) and 2M Engineering Ltd. (Netherlands).[citation needed]

The Biotechnology Research Centre is a 986-square-metre (10,610 sq ft) research centre specialising in the applied research of biotechnology products, specifically palm oil crop. The building cost RM3.5M, excluding internal fittings and scientific equipment.[15] Inside the main research building there are two labs, one for the teaching of UNMC biotechnology students and the other for research.

The research centre is operated as a joint collaboration with Applied Agricultural Resources Sdn. Bhd (AAR), a start-up company.[15][16][17]

During the design and planning phase of the Semenyih campus, there were issues that a planned incinerator was to be built in Broga, something which the university and local area residents protested about.[18] Eventually, the incinerator plant was reportedly moved to a new site in Kampung Bohol, Puchong.

The University of Nottingham Rugby Club Nottingham Knights were champions at the 2011 Malaysia Association of Private Colleges and Universities (MAPCU) Rugby tournament. The team beat all opposition without conceding a goal.[19] 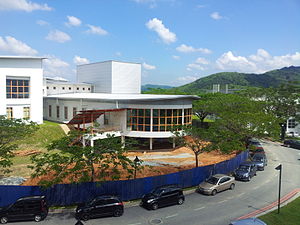 Priority for on-campus residence is allocated to international students and first year freshmen, while senior students generally stay off-campus in the nearby neighbourhood of Taman Tasik Semenyih. Although there are plans to further increase the number of on campus student accommodation, the university is focused on expanding off-campus housing. On-campus housing is made up of five residential halls - Pangkor Hall, Redang Hall, Tioman Hall, Kapas Hall and Langkawi Hall, which are named after resort islands in Malaysia.

IGNITE Magazine is the official student media in the Malaysia campus. It is an online media platform originally founded by Ben Hunte and Eiman Mirghani. The magazine is now supported by the University's School of Modern Languages and Culture. The online magazine is open to the existing student population and provides coverage of both on and off campus events.[20]

As part of Nottingham's advantage scheme, students may be exchanged to other campuses. In the words of Vincenzo Raimo, director of Nottingham’s International Office “Students can continue studying exactly the same modules available at Nottingham in the UK but overseas instead — experience the excitement of Asia but within the familiar academic setting of Nottingham University, ... Transfers are open to anyone getting good grades and whose degree subject is among those taught overseas. Air fares may not be cheap, but the cost of living is — and anyone spending the full year at a branch pays just half the UK tuition fee. "[14][21] 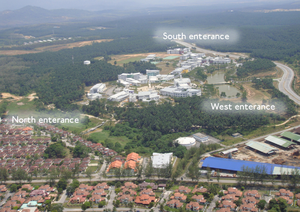 There is no direct public transportation connected to the university, other than that of university shuttle buses commuting between the campus and Kajang railway station. Shuttle bus services are offered free as a university incentive to provide greener sustainable transport and to alleviate on-campus parking issues. However, shuttle bus services are by regulations restricted to students and staff of the university. The nearest public bus route is at the nearest town of Semenyih, approximately 3 km from campus.