From Infogalactic: the planetary knowledge core
(Redirected from Untermenschen)
Jump to: navigation, search

Untermensch (German pronunciation: [ˈʔʊntɐˌmɛnʃ], underman, sub-man, subhuman; plural: Untermenschen) is a term that became infamous when the Nazis used it to describe "inferior people" often referred to as "the masses from the East," that is Jews, Roma, and Slavs (mainly ethnic Poles, Serbs, and later also Russians).[1][2] The term was also applied to most Blacks, and persons of color, with some particular exceptions.[3] Jewish people were to be exterminated[4] in the Holocaust, while, according to the Generalplan Ost, the Slavs of East-Central Europe were to be mostly deported to Asia, or exterminated and partially Germanized. These concepts were an important part of the Nazi racial policy.[5] While the Nazis were inconsistent in the implementation of their policy, its genocidal death toll was in tens of millions of victims.[6][7] 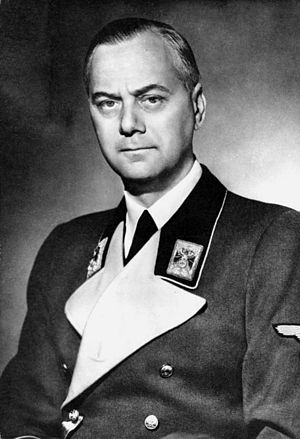 Although usually incorrectly considered to have been coined by the Nazis, the term "under man" in the above-mentioned sense was first used by American author Lothrop Stoddard in the title of his 1922 pamphlet The Revolt Against Civilization: The Menace of the Under-man.[8] It was later adopted by the Nazis from that book's German version Der Kulturumsturz: Die Drohung des Untermenschen (1925).[9] The German word Untermensch had been used earlier, but not in a racial sense, for example in the 1899 novel Der Stechlin by Theodor Fontane. Since most writers who employed the term did not address the question of when and how the word entered the German language, Untermensch is usually translated into English as "sub-human." The leading Nazi attributing the concept of the East-European "under man" to Stoddard is Alfred Rosenberg who, referring to Russian communists, wrote in his Der Mythus des 20. Jahrhunderts (1930) that "this is the kind of human being that Lothrop Stoddard has called the 'under man.'" ["...den Lothrop Stoddard als 'Untermenschen' bezeichnete."][10] Quoting Stoddard: "The Under-Man – the man who measures under the standards of capacity and adaptability imposed by the social order in which he lives".

It is possible that Stoddard constructed his "under man" as an opposite to Friedrich Nietzsche's Übermensch (superman) concept. Stoddard doesn't say so explicitly, but he refers critically to the "superman" idea at the end of his book (p. 262).[8] Wordplays with Nietzsche's term seem to have been used repeatedly as early as the 19th century and, due to the German linguistic trait of being able to combine prefixes and roots almost at will in order to create new words, this development can be considered logical. For instance, German author Theodor Fontane contrasts the Übermensch/Untermensch word pair in chapter 33 of his novel Der Stechlin.[11] Nietzsche used "Untermensch" at least once in contrast to "Übermensch" in Die fröhliche Wissenschaft (1882); however, he did so in reference to semi-human creatures in mythology, naming them alongside dwarfs, fairies, centaurs and so on.[12] Earlier examples of "Untermensch" include Romanticist Jean Paul using the term in his novel Hesperus (1795) in reference to an Orangutan (Chapter "8. Hundposttag").[13]

In a speech in 1927 to the Bavarian regional parliament, the Nazi propagandist Julius Streicher, publisher of Der Stürmer, used the term "Untermensch" referring to the communists of the German Bavarian Soviet Republic:

It happened at the time of the [Bavarian] Soviet Republic: When the unleashed subhumans rambled murdering through the streets, the deputies hid behind a chimney in the Bavarian parliament.[14]

Nazis repeatedly used the term "Untermensch" was used repeatedly in writings and speeches directed against the Jews, the most notorious example being a 1935 SS publication with the title "Der Untermensch", which contains an antisemitic tirade sometimes considered to be an extract from a speech by Heinrich Himmler. In the pamphlet The SS as an Anti-Bolshevist Fighting Organization, published in 1936, Himmler wrote:

We shall take care that never again in Germany, the heart of Europe, will the Jewish-Bolshevistic revolution of subhumans be able to be kindled either from within or through emissaries from without.[15][16][17]

In his speech "Weltgefahr des Bolschewismus" ("World danger of Bolshevism") in 1936, Joseph Goebbels said that "subhumans exist in every people as a leavening agent".[18]

Another example of the use of the term "Untermensch", this time in connection with anti-Soviet propaganda, is a brochure entitled "Der Untermensch", edited by Himmler and distributed by the Race and Settlement Head Office. SS-Obersturmführer Ludwig Pröscholdt, Jupp Daehler and SS-Hauptamt-Schulungsamt Koenig are associated with its production.[3] Published in 1942 after the start of Operation Barbarossa, the German invasion of the Soviet Union, it is around 50 pages long and consists for the most part of photos portraying the enemy in an extremely negative way (see link below for the title page). 3,860,995 copies were printed in the German language. It was translated into Greek, French, Dutch, Danish, Bulgarian, Hungarian, Czech and seven other languages. The pamphlet says the following:

Just as the night rises against the day, the light and dark are in eternal conflict. So too, is the subhuman the greatest enemy of the dominant species on earth, mankind. The subhuman is a biological creature, crafted by nature, which has hands, legs, eyes and mouth, even the semblance of a brain. Nevertheless, this terrible creature is only a partial human being.

Although it has features similar to a human, the subhuman is lower on the spiritual and psychological scale than any animal. Inside of this creature lies wild and unrestrained passions: an incessant need to destroy, filled with the most primitive desires, chaos and coldhearted villainy.

A subhuman and nothing more!

Not all of those who appear human are in fact so. Woe to him who forgets it!

Mulattoes and Finn-Asian barbarians, Gipsies and black skin savages all make up this modern underworld of subhumans that is always headed by the appearance of the eternal Jew.[3]

Nazis classified those they called the sub-humans into different types; they placed priority on extermination of the Jews, and exploitation of others as slaves.[19]

Historian Robert Jan van Pelt writes that for the Nazis, "it was only a small step to a rhetoric pitting the European Mensch against the Soviet Untermensch, which had come to mean a Russian in the clutches of Judeo-Bolshevism."[20]

The Untermensch concept included Jews, Roma and Sinti (Gypsies), and Slavic peoples such as Poles, Serbs, and Russians.[5] The Slavs were regarded as "Untermenschen", barely fit for exploitation as slaves.[21][22] Hitler and Goebbels compared them to the "rabbit family" or to "stolid animals" that were "idle" and "disorganized" and spread like a "wave of filth".[23]

Biology classes in Nazi Germany schools taught about differences between the race of Nordic German "Übermenschen" and "ignoble" Jewish and Slavic "subhumans".[24] The view that Slavs were subhuman was widespread among the German masses, and chiefly applied to the Poles. It continued to find support after the war.[25]

As a pragmatic way to solve military manpower shortages, the Nazis used soldiers from some Slavic countries, firstly from the Reich's allies Croatia and Bulgaria[26] and also within occupied territories.[27] The concept of the Slavs in particular being Untermenschen served the Nazis' political goals; it was used to justify their expansionist policy and especially their aggression against Poland and the Soviet Union in order to achieve Lebensraum, particularly in Ukraine. Early plans of the German Reich (summarized as Generalplan Ost) envisioned the displacement, enslavement, and elimination of no fewer than 50 million people, who were not considered fit for Germanization, from territories it wanted to conquer in Europe; Ukraine's "chernozem" (black earth) soil was considered a particularly desirable zone for colonization by the "Herrenvolk" ("master race").[5]