From Infogalactic: the planetary knowledge core
Jump to: navigation, search
"Vaishnav" redirects here. For the Olympic sailor from the France, see Vaishnav (sailor).

Vaishnavism (Vaisnava dharma) is one of the major branches of Hinduism along with Shaivism, Smartism and Shaktism. It is focused on the veneration of Vishnu. Vaishnavites, or the followers of the Vishnu, lead a way of life promoting the central importance of Vishnu and his ten avatars.

Followers worship Vishnu, the Supreme Lord and preserver of the Hindu Trimurti ('three images', the Trinity), and his ten avatars, including Rama and Krishna. The adherents of this sect are generally non-ascetic, monastic and devoted to meditative practice and ecstatic chanting.[1][2][3] They are deeply devotional. Vaishnavism is rich in saints, temples and scriptures.[4]

Its beliefs and practices, especially the concepts of Bhakti and Bhakti Yoga, are based largely on the Upanishads, and associated with the Vedas and Puranic texts such as the Bhagavad Gita, and the Padma Purana, Vishnu Purana and Bhagavata Purana.[5][6][7][8]

Bhagavatism, early Ramaism and Krishnaism merged in historical Vishnuism,[9] a tradition of historical Vedic religion, distinguished from other traditions by its primary worship of Vishnu.[10] Vaishnavism is historically the first structured Vaishnava religion as "Vishnuism, in a word, is the only cultivated native sectarian religion of India."[11] Although it is usual to speak of Vishnu as the source of the Avatar, this is only one of the names by which the god of Vaishnavism is known. The other names include Narayana, Vasudeva, Rama and Krishna; each the name of a divine figure with attributed supremacy, which each associated tradition of Vaishnavism believes to be distinct.[12] For example, in the Krishnaism branch of Vaishnavism,[13] such as the Gaudiya Vaishnava, Nimbarka and Vallabhacharya traditions, devotees worship Krishna as the One Supreme form of God, and source of all avatars, Svayam Bhagavan, in contrast to the belief of the devotees of the Sri Sampradaya.[14]

The principal belief of Vishnu-centered sects is the identification of Vishnu or Narayana as the one supreme God. This belief is similar to Krishna-centered traditions, such as Nimbaraka and Vallabha, in which Krishna is considered as the Supreme Lord Vishnu.

The belief in the supremacy of Vishnu is based upon the many avatars (incarnations) of Vishnu listed in the Puranic texts, which differs from other Hindu deities such as Ganesha, Surya or Durga. According to many Vaishnavites, the latter are instead classified as demi-gods or devas.

Vaishnavas, in following the process of initiation (diksha) given by a guru under whom they are trained to understand Vaishnava practices, accept the importance of the Supremacy of Lord Vishnu. At the time of initiation, the disciple is traditionally given a specific mantra, which the disciple will repeat, either out loud or within the mind, as an act of worship to Vishnu or one of his avatars. The practice of repetitive prayer is known as japa. The system of receiving initiation and training from a guru is based on injunctions throughout the scriptures held as sacred within the Vaishnava traditions but is not mandatory:

"Just try to learn the truth by approaching a spiritual master. Inquire from him submissively and render service unto him. The self-realized souls can impart knowledge unto you because they have seen the truth." (Bhagavad Gita)[15]

The scriptures specific to the Gaudiya Vaishnava group also state that one who performs an act of worship as simple as chanting the name of Vishnu or Krishna can be considered a Vaishnava by practice:

"Who chants the holy name of Krishna just once may be considered a Vaishnava. Such a person is worship-able and is the topmost human being." (Chaitanya Charitamrita)[17]

Vaishnava traditions refer to the writings of previous acharyas in their respective lineage or sampradya (see below) as authoritative interpretations of scripture.[18] While many schools like Smartism and Advaitism encourage interpretation of scriptures philosophically and metaphorically and not too literally,[citation needed] Vaishnavism stresses the literal meaning (mukhya vṛitti) as primary and indirect meaning (gauṇa vṛitti) as secondary: sākṣhād upadesas tu shrutih - "The instructions of the shruti-shāstra should be accepted literally, without fanciful or allegorical interpretations."[18][19] 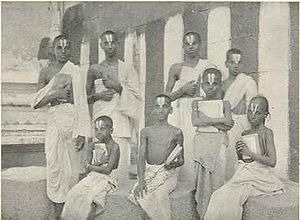 Within Vaishnavism there are four main disciplic lineages (sampradayas),[20] each exemplified by a specific Vedic personality. The four sampradayas follow subtly different philosophical systems regarding the relationship between the soul (jiva) and God (Vishnu or Krishna), although the majority of other core beliefs are identical.[5][18][21][22]

Broadly, Vaishnavas in South India can be classified as Brahmins and non-Brahmins.

Among the Brahmins the main groups are:

These two sects evolved about 200 years after Ramanuja and differ on 18 points of doctrine. The founder of the Vadagalai sect is Swami Vedanta Desika, and the Tengalai sect is Manavala Mamuni.[24] But both schools have a common Guru Parampara prior to the division. The Sri Vaishnavas use both the Sanskrit veda as well as the Tamil divyaprabandham in temple worship.

Among the non-Brahmins, sections of various communities like the Chettiars and Mudaliars (Thuluva Vellalars)in Tamil Nadu, Namadhari in Karnataka and sections of the Komati Caste, Kammas, Padmashalis, Reddys, Rajus and Haridasus in Andhra Pradesh, Velamas in Telangana state and so on in other states are known as Vaishnavites. Some groups tend to be vegetarians like the Brahmins.

In Kerala, some communities call themselves Vaishnavas, especially the pisharodies and Gauda Saraswatha Brahmins and Embranthiries who settled in Kerala at a later phase of Brahmin Settlement. The Sagara Brahmins in and around Thiruvalla Sree Vallabha Vishnu Temple are also referred to as Vaisnavas accepting the Supremacy of Lord Vishnu.

Other branches and sects

On my tongue Vishnu, in my eyes Narayana, in my heart dwells Govinda.

Vaishnavas mark their foreheads with tilaka, either as a daily ritual, or on special occasions. The different Vaishnava sampradayas each have their own distinctive style of tilaka, which depicts the siddhanta of their particular lineage. The general tilaka pattern is of a parabolic shape resembling the letter U or two or more connected vertical lines on and another optional line on the nose resembling the letter Y, which usually represents the foot of Vishnu and the centre vertical line symbolizing his manhood. Alternate interpretations suggest that the symbol in representation of male and female parts in union.[26][27]

Vaishnavism is the largest denomination of Hinduism,with almost 350 million followers.[28] The worship of Vishnu was already well developed in the period of the Itihasas.[29] Hopkins says "Vishnuism, in a word, is the only cultivated native sectarian religion of India."[11] Vaishnavism is expounded in a part of the Mahabharata known as the Bhagavad Gita, which contains a dialogue between Krishna and Arjuna. In this dialogue, Krishna plays the role of Arjuna's charioteer.

Many of the ancient kings, beginning with Chandragupta II (Vikramaditya) (375-413 CE) were known as Parama Bhagavatas or Bhagavata Vaishnavas.[30]

Vaishnavism flourished in predominantly Shaivite South India during the seventh to tenth centuries CE and is still commonplace, especially in Tamil Nadu, as a result of the twelve Alvars, saints who spread the sect to the common people with their devotional hymns. The temples that the Alvars visited or founded are now known as Divya Desams. Their poems in praise of Vishnu and Krishna in Tamil language are collectively known as Naalayira (Divya Prabandha).[31][32]

In later years, Vaishnava practices increased in popularity due to the influence of sages like Ramanujacharya, Madhvacharya, Nimbarkacharya, Vallabhacharya, Vedanta Desika, Manavala Mamunigal, Surdas, Tulsidas, eknath, Tyagaraja, and many others.[33][34][35][36] 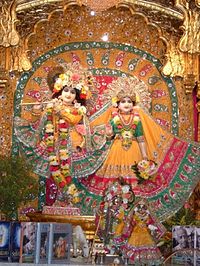 In his The Religions of India, Edward Washburn Hopkins presents an accepted distinction as to the assumption that Vishnuism is associated with Vedic brahmanism, and was part of brahmanism. Krishnaism was adopted much later, and it is for this reason, amongst others, that despite its modern iniquities Shiva has appealed more to the brahmans than Krishna. It's only later that Vishnuism merged with Krishnaism.[37] Thus, today Vashnavism is by far the most popular sect of Hinduism, having more followers than Shaivism and Shaktaism combined.[citation needed]

Since the 1900s Vaishnavism has spread from India and is now practiced in many places around the globe, including America, Europe, Africa, Russia and South America. This is largely due to the growth of the ISKCON movement, founded by A.C. Bhaktivedanta Swami Prabhupada in 1966.[40][41][42]

Two great Indian epics, the Ramayana and the Mahabharata, form an important part of Vaishnava philosophy, theology, and culture.

The Ramayana describes the story of Rama, an avatara of Vishnu, and is taken as a history of the 'ideal king', based on the principles of dharma, morality and ethics. Rama's wife Sita, his brother Lakshman, with his devotee and follower Hanuman all play key roles within the Vaishnava tradition as examples of Vaishnava etiquette and behaviour. Ravana, the evil king and villain of the epic, plays the opposite role of how not to behave.

The Mahabharata is centered around Krishna and details the story of a dynastic war between two families of cousins, with Krishna and the Pandavas, five brothers, playing pivotal roles in the drama. The philosophical highlight of the work is the chapter covering a conversation between Arjuna and Krishna prior to the final battle, individually known as the Bhagavad Gita. The Bhagavad Gita, though influential in most philosophies of Hinduism, is of particular importance to Vaishnavas because it is believed to be an accurate record of the very words spoken by Krishna himself. Both works are often re-enacted in part as dramas by followers of Vaishnavism, especially on festival days concerning each of the specific avatars. The Bhagavad Gita is widely studied as a theological textbook and is rendered in numerous English translations and world languages.

Vaishnava theology has been a subject of study and debate for many devotees, philosophers and scholars within India for centuries. In recent decades this study has also been pursued in a number of academic institutions in Europe, such as the Oxford Centre for Hindu Studies, Bhaktivedanta College, and Syanandura Vaishnava Sabha, a moderate and progressive Vaishnava body headed by Gautham Padmanabhan in Trivandrum which intends to bring about a single and precise book called Hari-grantha to include all Vaishnava philosophies.