From Infogalactic: the planetary knowledge core
Jump to: navigation, search
This article is about the style of artwork. For other uses, see Vanitas (disambiguation). 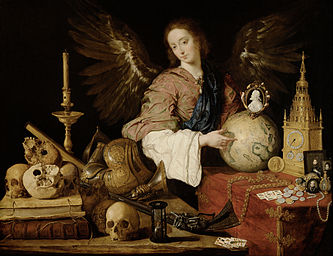 Vanitas is a category of symbolic works of art especially associated with 16th and 17th century still-life painting in Flanders and the Netherlands. The Latin noun vanitas -atis means "emptiness"[1] and thus refers in this context to the traditional Christian view of earthly life and the worthless nature of all earthly goods and pursuits. The word vanitas derives its prominence in Christian philosophy from its appearance in the book of Book of Ecclesiastes,1:2 and 12:8.[2] The Vulgate Bible renders the verse as Vanitas vanitatum omnia vanitas,[Eccl. 1:2;12:8] translated in the King James Version of the Bible as "Vanity of vanities, all is vanity. The English word "Vanity" is thus used here in its older (especially pre-14th century) sense of "futility".[3] 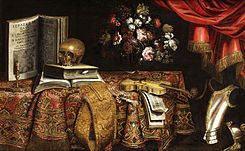 Vanitas themes were common in medieval funerary art, with most surviving examples in sculpture. By the 15th century these could be extremely morbid and explicit, reflecting an increased obsession with death and decay also seen in the Ars moriendi, the Danse Macabre, and the overlapping motif of the Memento mori. From the Renaissance such motifs gradually became more indirect and, as the still-life genre became popular, found a home there. Paintings executed in the vanitas style were meant to remind viewers of the transience of life, the futility of pleasure, and the certainty of death. They also provided a moral justification for painting attractive objects. 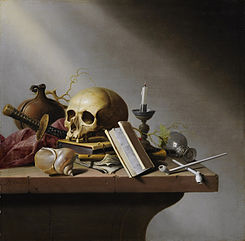 Common vanitas symbols include skulls, which are a reminder of the certainty of death; rotten fruit (decay); bubbles (the brevity of life and suddenness of death); smoke, watches, and hourglasses, (the brevity of life); and musical instruments (brevity and the ephemeral nature of life). Fruit, flowers and butterflies can be interpreted in the same way, and a peeled lemon was, like life, attractive to look at but bitter to taste. Art historians debate how much, and how seriously, the vanitas theme is implied in still-life paintings without explicit imagery such as a skull. As in much moralistic genre painting, the enjoyment evoked by the sensuous depiction of the subject is in a certain conflict with the moralistic message. Composition of flowers is a less obvious style of Vanitas by Abraham Mignon in the National Museum in Warsaw. Barely visible amid vivid and perilous nature (snakes, poisonous mushrooms), a bird skeleton is a symbol of vanity and shortness of life. 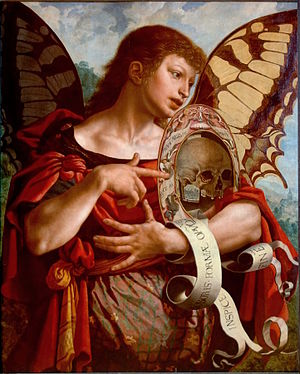