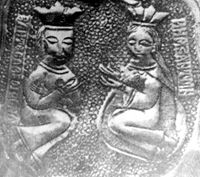 Vladislav and his wife Neacşa 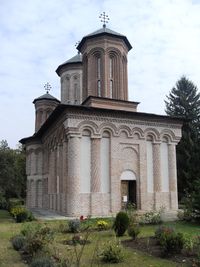 The Monastery founded by Vladislav II.

The way Vladislav II came to throne is debatable. The most accepted is that Vladislav assassinated Vlad II Dracul, ruler of Wallachia, and was subsequently placed on the throne by John Hunyadi,[2] on the other, Vladislav II was helped by the Ottomans to replace Dan III which was assigned by the Hungarians.[3]

It is not known if Vladislav II had been invited to take part in the Battle of Kosovo (1448) or not , it is certain however that he didn't send any troops in aid, and as a result, John Hunyadi took back the transilvanian possessions: Făgăraș and Amlaș on the 23rd of April 1452. Vladislav then embargoed trade of Wallachia to Brasov county, part of Hunyadi's Transylvania. After negotiations, on the 15th of November 1455, Hunyadi tells the people of Brasov that the embargo will be lifted however Vladislav trying to get back the possessions, attacks the Făgăraș fortress and in the process burns a few Saxon villages. In response, Hunyadi gives Vlad III ; a son of the rival Drăculești house of Basarab ( ie Vlad the Impaler) a few soldiers and with the help of the Saxons whose villages were burned down, dispose Vladislav II.

On August 20, 1456, Vlad II Dracul's son, Vlad III Dracula killed Vladislav in hand-to-hand combat. Although Vladislav's gravestone is marked August 22, 1456, that was the date of the engraving. He was not buried at the Snagov Monastery which he founded, instead he was buried at the Dealu Monastery.

Vladislav founded the Snagov Monastery in 1453 where a wooden sculpted door was preserved to this day and it is exhibited at the Religious Art Museum of Bucharest. At the Athos Mountain in 1450, Vladislav gave Koutloumousiou Monastery a charter and gave a gift of 10000 Akçet to the St. Elijah Skit.