From Infogalactic: the planetary knowledge core
Jump to: navigation, search
Sequence of rulers considered members of the same familyTemplate:SHORTDESC:Sequence of rulers considered members of the same family
This article is about the general concept of a line of rulers. For other uses, see Dynasty (disambiguation).
Not to be confused with Royal family, Royal household, or Political family.
"Royal house" redirects here. For royal residences, see Palace.
For a list, see List of dynasties. 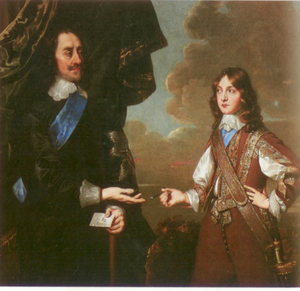 Charles I of England and his son, the future James II of England, from the House of Stuart.
File:Qing China 1820.png
The Qing dynasty was the final imperial dynasty of China, established in 1636 and ended in 1912, with a brief restoration in 1917.

A dynasty (UK /ˈdɪnəsti/, US /ˈdaɪ-/)[1][2] is a sequence of rulers from the same family,[3] usually in the context of a feudal or monarchical system, but sometimes also appearing in republics. Alternative terms for "dynasty" may include "house", "family" and "clan", among others. The longest surviving dynasty in the world is the Imperial House of Japan, otherwise known as the Yamato dynasty, whose reign is traditionally dated to 660 BCE and historically attested from 781 CE.

The dynastic family or lineage may be known as a "noble house",[4] which may be styled as "imperial", "royal", "princely", "ducal", "comital", "baronial" etc., depending upon the chief or present title borne by its members.

Historians periodize the histories of many states and civilizations, such as Ancient Egypt (3100 – 30 BCE) and Ancient and Imperial China (2070 BCE – CE 1912), using a framework of successive dynasties. As such, the term "dynasty" may be used to delimit the era during which a family reigned, and also to describe events, trends and artifacts of that period (e.g., "a Ming-dynasty vase"). The word "dynasty" itself is often dropped from such adjectival references (e.g., "a Ming vase").

Until the 19th century, it was taken for granted that a legitimate function of a monarch was to aggrandize his dynasty: that is, to expand the wealth and power of his family members.[5]

Before the 20th century, dynasties throughout the world have traditionally been reckoned patrilineally, such as under the Frankish Salic law. In polities where it was permitted, succession through a daughter usually established a new dynasty in her husband's ruling house. This has changed in some places in Europe, where succession law and conventions have maintained dynasties de jure through a female. For instance, the House of Windsor will be maintained through the children of Queen Elizabeth II, as it did with the monarchy of the Netherlands, whose dynasty remained the House of Orange-Nassau through three successive queens regnant. The earliest such example among major European monarchies was in the Russian Empire in the 18th century, where the name of the House of Romanov was maintained through Grand Duchess Anna Petrovna. This also happened in the case of Queen Maria II of Portugal, who married Prince Ferdinand of Saxe-Coburg-Gotha, but whose descendants remained members of the House of Braganza, per Portuguese law. In Limpopo Province of South Africa, Balobedu determined descent matrilineally, while rulers have at other times adopted the name of their mother's dynasty when coming into her inheritance. Less frequently, a monarchy has alternated or been rotated, in a multi-dynastic (or polydynastic) system—that is, the most senior living members of parallel dynasties, at any point in time, constitute the line of succession.

Not all feudal states or monarchies were or are ruled by dynasties; modern examples are the Vatican City State, the Principality of Andorra, and the Sovereign Military Hospitaller Order of Saint John of Jerusalem, of Rhodes and of Malta. Throughout history, there were monarchs that did not belong to any dynasty; non-dynastic rulers include King Arioald of the Lombards and Emperor Phocas of the Byzantine Empire. Dynasties ruling subnational monarchies do not possess sovereign rights; two modern examples are the monarchies of Malaysia and the royal families of the United Arab Emirates.

The word "dynasty" is sometimes used informally for people who are not rulers but are, for example, members of a family with influence and power in other areas, such as a series of successive owners of a major company. It is also extended to unrelated people, such as major poets of the same school or various rosters of a single sports team.[3]

The word dynasty derives from Latin dynastia, which comes from Ancient Greek δυναστεία (dynastéia), where it referred to 'power', 'dominion', and 'rule' itself.[6] It was the abstract noun of δυνάστης (dynástēs),[7] the agent noun of δύναμις (dynamis) 'power" or 'ability',[8] from δύναμαι (dýnamai) 'to be able'.[9]

A ruler from a dynasty is sometimes referred to as a "dynast", but this term is also used to describe any member of a reigning family who retains a right to succeed to a throne. For example, King Edward VIII ceased to be a dynast of the House of Windsor following his abdication.

In historical and monarchist references to formerly reigning families, a "dynast" is a family member who would have had succession rights, were the monarchy's rules still in force. For example, after the 1914 assassinations of Archduke Franz Ferdinand of Austria and his morganatic wife, their son Maximilian, Duke of Hohenberg, was bypassed for the Austro-Hungarian throne because he was not a Habsburg dynast. Even since the abolition of the Austrian monarchy, Duke Maximilian and his descendants have not been considered the rightful pretenders by Austrian monarchists, nor have they claimed that position.

The term "dynast" is sometimes used only to refer to agnatic descendants of a realm's monarchs, and sometimes to include those who hold succession rights through cognatic royal descent. The term can therefore describe overlapping but distinct sets of people. For example, David Armstrong-Jones, 2nd Earl of Snowdon, a nephew of Queen Elizabeth II, is in the line of succession to the British crown; making him a British dynast. On the other hand, since he is not a patrilineal member of the British royal family, he is therefore not a dynast of the House of Windsor.

Comparatively, the German aristocrat Prince Ernst August of Hanover, a male-line descendant of King George III of the United Kingdom, possesses no legal British name, titles or styles (although he is entitled to reclaim the former royal dukedom of Cumberland). He was born in the line of succession to the British throne and was bound by Britain's Royal Marriages Act 1772 until it was repealed when the Succession to the Crown Act 2013 took effect on 26 March 2015.[10] Thus, he requested and obtained formal permission from Queen Elizabeth II to marry the Roman Catholic Princess Caroline of Monaco in 1999. Yet, a clause of the English Act of Settlement 1701 remained in effect at that time, stipulating that dynasts who marry Roman Catholics are considered "dead" for the purpose of succession to the British throne.[11] That exclusion, too, ceased to apply on 26 March 2015, with retroactive effect for those who had been dynasts before triggering it by marriage to a Roman Catholic.[10]

A "dynastic marriage" is one that complies with monarchical house law restrictions, so that the descendants are eligible to inherit the throne or other royal privileges. The marriage of King Willem-Alexander of the Netherlands to Queen Máxima Zorreguieta in 2002 was dynastic, for example, making their eldest child Princess Catharina-Amalia the heir apparent to the Crown of the Netherlands. However, the marriage of his younger brother Prince Friso of Orange-Nassau in 2003 lacked government support and parliamentary approval. Thus, Prince Friso forfeited his place in the order of succession to the Dutch throne, and consequently lost his title as a "Prince of the Netherlands", and left his children without dynastic rights.

Dynasties lasting at least 250 years include the following. Legendary ancient lineages that cannot be historically confirmed are not included.

There are 44 sovereign states with a monarch as head of state, of which 42 are ruled by dynasties.[lower-alpha 2] There are currently 26 sovereign dynasties.

Though in elected governments, rule does not pass automatically by inheritance, political power often accrues to generations of related individuals in the elected positions of republics, and constitutional monarchies. Eminence, influence, tradition, genetics, and nepotism may contribute to the phenomenon.

Family dictatorships are a different concept in which political power passes within a family because of the overwhelming authority of the leader, rather than informal power accrued to the family.