From Infogalactic: the planetary knowledge core
Jump to: navigation, search
"Plimsoll line" redirects here. For the use of the Plimsoll symbol in chemistry, see Standard state.
For other uses, see Waterline (disambiguation). 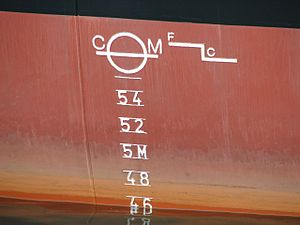 Load line mark and lines on the hull of a ship

The waterline is the line where the hull of a ship meets the surface of the water, in concept or reality. Specifically, it is also the name of a special marking, also known as the International Load Line, Plimsoll line or water line (positioned amidships), that indicates the draft of the ship and the legal limit to which a ship may be loaded for specific water types and temperatures in order to safely maintain buoyancy,[1] particularly with regard to the hazard of waves that may arise. Temperature affects the level, because warm water provides less buoyancy, being less dense than cold water, as does salinity, because fresh water is less dense than seawater. For vessels with displacement hulls, the hull speed is determined by, among other things, the waterline length. In a sailing boat, the waterline length can change significantly as the boat heels, and can dynamically affect the speed of the boat.

The waterline can also refer to any line on a ship's hull that is parallel to the water's surface when the ship is afloat in a normal position. Hence, all waterlines are one class of "ships lines" used to denote the shape of a hull in Naval Architecture plans.

In aircraft design, the term "waterline" refers to the vertical location of items on the aircraft. This is (normally) the "Z" axis of an XYZ coordinate system, the other two axes being the Fuselage Station (X) and Buttock Line (Y).

The purpose of a load line is to ensure that a ship has sufficient freeboard (the height from the water line to the main deck) and thus sufficient reserve buoyancy. The freeboard of commercial vessels is measured between the lowest point of the uppermost continuous deck at side and the waterline and this must not be less than the freeboard marked on the Load Line Certificate issued to that ship. All commercial ships, other than in exceptional circumstances,[2] have a load line symbol painted amidships on each side of the ship. This symbol must also be permanently marked, so that if the paint wears off it remains visible. The load line makes it easy for anyone to determine if a ship has been overloaded. The exact location of the load line is calculated and/or verified by a Classification Society and that society issues the relevant certificates. This marking was invented in the 1870s by Samuel Plimsoll.

The first official loading regulations are thought to date back to maritime legislation originating with the kingdom of Crete in 2,500 BC when vessels were required to pass loading and maintenance inspections. Roman sea regulations also contained similar regulations.

In the Middle Ages the Venetian Republic,[3] the city of Genoa and the Hanseatic League required ships to show a load line. In the case of Venice this was a cross marked on the side of the ship,[4] and of Genoa three horizontal lines.[citation needed]

The first 19th century loading recommendations were introduced by Lloyd's Register of British and Foreign Shipping in 1835, following discussions among shipowners, shippers and underwriters. Lloyds recommended freeboards as a function of the depth of the hold (three inches per foot of depth). These recommendations, used extensively until 1880, became known as "Lloyd's Rule".

In the 1860s, after increased loss of ships due to overloading, a British MP, Samuel Plimsoll, took up the load line cause.[5] A Royal Commission on unseaworthy ships was established in 1872, and in 1876 the United Kingdom Merchant Shipping Act made the load line mark compulsory, although the positioning of the mark was not fixed by law until 1894. In 1906, laws were passed requiring foreign ships visiting British ports to be marked with a load line. It was not until 1930 (The 1930 Load Line Convention) that there was international agreement for universal application of load line regulations. 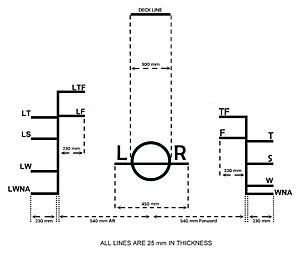 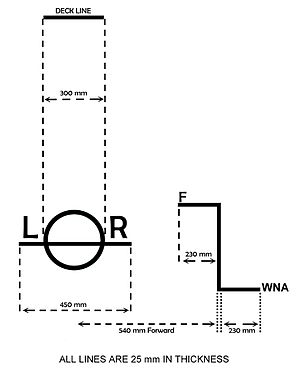 The original "Plimsoll mark" was a circle with a horizontal line through it to show the maximum draft of a ship. Additional marks have been added over the years, allowing for different water densities and expected sea conditions.

Letters may also appear to the sides of the mark indicating the classification society that has surveyed the vessel's load line. The initials used include CN for CONARINA AB for the American Bureau of Shipping, LR for Lloyd's Register, GL for Germanischer Lloyd, BV for Bureau Veritas, IR for the Indian Register of Shipping, RI for the Registro Italiano Navale, NK for Nippon Kaiji Kyokai, and NV for Det Norske Veritas. These letters should be approximately 115 millimetres in height and 75 millimetres in width.[7] The Load Line Length is referred to during and following load line calculations.

The letters on the load line marks have the following meanings:

centimetres above the summer load line where

is the displacement in metric tonnes at the summer load draft and T is the metric tonnes per centimetre immersion at that draft.
In any case where

Certain vessels are assigned Timber Freeboards, but before these can be assigned certain additional conditions have to be met. One of these conditions is that the vessel must have a forecastle of at least 0.07 the length of the vessel and of not less than standard height, which is 1.8 metres for a vessel 75 metres or less in length and 2.3 metres for a vessel 125 metres or more in length with intermediate heights for intermediate lengths. A poop or raised quarter deck is also required if the length is less than 100 metres. The letter L prefixes the load line marks to indicate a timber load line.[1] Except for the Timber Winter North Atlantic freeboard the other freeboards are less than the standard freeboards. This allows these ships to carry additional timber as deck cargo, but with the facility to jettison this cargo.

The letters on the Timber Load line marks have the following meanings:

The Summer Timber load line is arrived at from the appropriate tables in the Load Line Rules.[8]