From Infogalactic: the planetary knowledge core
Jump to: navigation, search
For other uses, see Weir (disambiguation). 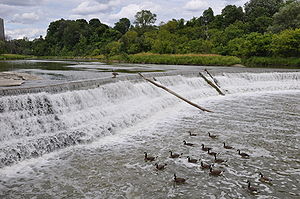 A weir on the Humber River near Raymore Park in Toronto, Ontario, Canada 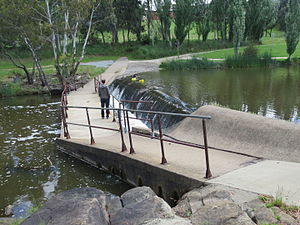 A weir /ˈwɪər/ is a barrier across a river designed to alter its flow characteristics. In most cases, weirs take the form of obstructions smaller than most conventional dams, pooling water behind them while also allowing it to flow steadily over their tops. Weirs are commonly used to alter the flow of rivers to prevent flooding, measure discharge, and help render rivers navigable. Weirs are also used in the study of returning salmonids.[1]

Weirs allow hydrologists and engineers a simple method of measuring the volumetric flow rate in small to medium-sized streams or in industrial discharge locations. Since the geometry of the top of the weir is known and all water flows over the weir, the depth of water behind the weir can be converted to a rate of flow. The calculation relies on the fact that fluid will pass through the critical depth of the flow regime in the vicinity of the crest of the weir. If water is not carried away from the weir, it can make flow measurement complicated or even impossible.

The discharge can be summarised as:

When used for flow measurement it is important that the weir crest be kept free of rust or nicks. Roughness of any form will cause the weir to discharge more water than indicated by the standard discharge equations or tables. Air must also freely circulate under the nappe as discharge errors of as much as 25% may occur if the nappe is not adequately ventilated.[2]

A weir may be used to maintain the vertical profile of a stream or channel, and is then commonly referred to as a grade stabilizer such as the weir in Duffield, Derbyshire, England, UK.

The crest of an overflow spillway on a large dam is often called a weir.

Weirs, referred to as low head barrier dams in this context, are used in the control of invasive sea lamprey in the Great Lakes. They serve as a barrier to prevent recolonization by lamprey above the weir, reducing the area required to be treated with lampricide, and providing a convenient point to measure water flow (to calculate amount of chemical to be applied).

Mill ponds provide a watermill with the power it requires, using the difference in water level above and below the weir to provide the necessary energy. 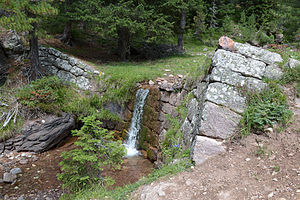 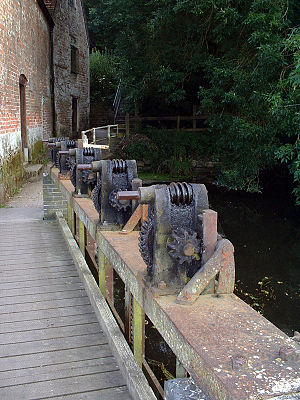 The bridge and weir mechanism at Sturminster Newton on the River Stour, Dorset, England, UK

Two weirs on the River Wear in Durham, County Durham, England, UK. The lower weir also has fish ladders to allow fish like salmon to navigate the weir. 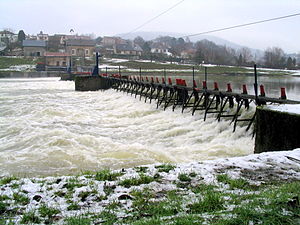 A manually operated needle dam-type weir near Revin on the River Meuse, France 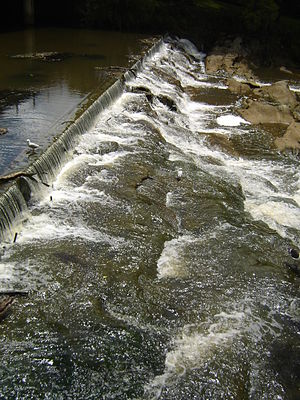 A weir in Warkworth, New Zealand 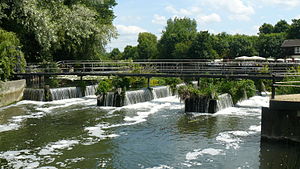 There are several different types of weirs. A weir may be a simple metal plate with a V-notch cut into it, or it may be a concrete and steel structure across the bed of a river. A weir that causes a large change of water level behind it, as compared to the error inherent in the depth measurement method, will give an accurate indication of the flow rate. Some weirs are used as bridges for people to walk along.

A labyrinth weir uses a trapezoidal-shaped weir wall geometry (plan view) to increase the weir length. They are versatile structures and can be modified to fit many applications.[5]

A broad-crested weir is a flat-crested structure, with a long crest compared to the flow thickness.[6] When the crest is "broad", the streamlines become parallel to the crest invert and the pressure distribution above the crest is hydrostatic. The hydraulic characteristics of broad-crested weirs were studied during the 19th and 20th centuries. Practical experience showed that the weir overflow is affected by the upstream flow conditions and the weir.

To reduce the risks related to large flooding EDF (French electricity company) has equipped some of its weirs with crests in shape of piano keys. This design makes possible the evacuation of a large flowrate of excess of water in case of extreme flooding.

The sharp crested weirs can be consolidated into three geometrical groups : a) the rectangular weir, b) the V or triangular notch, and c) special notches, such as trapezoidal, circular or parabolic weirs. For accurate flow measurement over a wider range of flow rates, a compound weir combines two or more types - typically a V-notch weir with a rectangular weir.[9]

These weirs are a combination of a V-notch weir and a rectangular weir and are available for insertion in pipes from 6 to 15 inches (150 to 380 mm) - with secondary adapters available for larger pipe sizes. The weirs are intended to measure no more than 35% of the pipe's open channel flow capacity.

The V-notch weir is a triangular channel section, used to measure small discharge values. The upper edge of the section is always above the water level, so the channel is always triangular simplifying calculation of the cross-sectional area. V-notch weirs are preferred for low discharges as the head above the weir crest is more sensitive to changes in flow compared to rectangular weirs, for example, the Rehbock weir. Under laboratory conditions, V-notch weirs typically achieve accuracies of 2% to 5%, while field condition accuracies from 5% to 15% may be expected.[10]

The equation recommended by the Bureau of Reclamation in their Water Measurement Manual, for use with a fully contracted, 90°, v notch, sharp crested weir with free flow conditions and 0.2 ft < H < 1.25 ft, is:

The diagram at the left[clarification needed] shows the parameters H, P, θ and S for a v notch weir as used for open channel flow rate measurement.

V notch weir equation for notch angles other than 90 degrees

For notch angles other than 90°, the Kindsvater-Carter equation, as given below, from the Bureau of Reclamation, Water Measurement Manual, should be used. That equation is:

The diagram at the left[clarification needed] is a graph of

The concept of the Minimum Energy Loss (MEL) structure was developed by Gordon McKay in 1971.[13] The first MEL structure was the Redcliffe storm waterway system, also called Humpybong Creek drainage outfall, completed in 1960 in the Redcliffe Peninsula in Queensland, Australia. It consisted of a MEL weir acting as a streamlined drop inlet followed by a 137 m long culvert discharging into the Pacific Ocean. The weir was designed to prevent beach sand being washed in and choking the culvert, as well as to prevent salt intrusion in Humpybong Creek without afflux (rise in water level on the upstream side of an obstruction). The structure is still in use and passed floods greater than the design flow in several instances without flooding (McKay 1970, Chanson 2007).

The concept of the Minimum Energy Loss (MEL) weir was developed to pass large floods with minimum energy loss and afflux, and nearly-constant total head along the waterway. The flow in the approach channel is contracted through a streamlined chute and the channel width is minimum at the chute toe, just before impinging into the downstream natural channel. The inlet and chute are streamlined to avoid significant form losses and the flow may be critical from the inlet lip to the chute toe at design flow. MEL weirs were designed specifically for situations where the river catchment is characterized by torrential rainfalls and by very small bed slope. The first major MEL weir was the Clermont weir (Qld, Australia 1963), if the small control weir at the entrance of Redcliffe culvert is not counted. The largest, Chinchilla weir (Qld, Australia 1973), is listed as a "large dam" by the International Commission on Large Dams.