From Infogalactic: the planetary knowledge core
Jump to: navigation, search
For the Canadian mathematician and philosopher, see William P. Byers. 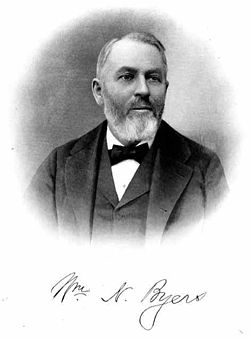 William Newton Byers (February 22, 1831 – March 25, 1903) was a founding figure of Omaha, Nebraska, serving as the first deputy surveyor of the Nebraska Territory, on the first Omaha City Council, and as a member of the first Nebraska Territorial Legislature.

He was also an early settler of Denver, Colorado, and the founder and editor of the Rocky Mountain News in Denver.

Originally from Ohio, Byers moved with his parents to Iowa in 1851, and then to Omaha, Nebraska as the city was being laid out in 1854.[1] There he became the first deputy surveyor in the Nebraska Territory, in which capacity he created the first official plat of Omaha. A partnership with Andrew J. Poppleton led Byers to make the first map of the city of Omaha. Soon afterwards he became a member of the first city council, and a member of the first session of the Nebraska Territorial Legislature, convened January 16, 1855, in Omaha.[2]

In 1859 Byers moved to Denver to take advantage of recent gold strikes in the area. Taking the printing presses of the defunct Bellevue Gazette by oxcart, he and J. H. Kellom were the authors of a handbook to the gold fields, published that year. Robert W. Furnas, in 1859 associated with the Nebraska Advertiser, later recalled that Byers had bought the equipment of the defunct and had it taken by ox team to Denver, then in western Kansas Territory, where he used it in the publication of the Rocky Mountain News. The Rocky Mountain News was the first newspaper printed in Colorado; it continued publication until 2009.

Upon moving to Denver he built and lived in several mansions, including the one now known as the Byers-Evans House. The Byers-Evans House is now a museum, and is located next to the Denver Art Museum in downtown Denver. Around 1889 Byers and his wife relocated outside of the city of Denver into the community known as "South Denver," which was organized as a "dry" community. They lived in a mansion on a large tract of land between Washington and Pearl streets; many historical sources list 171 Washington as the address of their home. Byers was an avid horticulturalist and planted a wide variety of tree species on his property; he used the majority of the land plot for personal farming and gardening. Some of the trees he planted may still be on the property today, around the periphery of William N. Byers Junior High School. After the Byers couple vacated their mansion and farm, the house was demolished and the property was used for Byers Junior High School, dedicated to the Denver Public Schools in 1921.[3]

As a former territorial surveyor, it is not surprising that Byers was an accomplished outdoorsman. While living in Denver, he spent considerable time in the mountains. In 1863, the artist Albert Bierstadt asked him to serve as a guide, and he led Bierstadt on an expedition from Idaho Springs, Colorado to the summit of the mountain Bierstadt named Mount Rosalie, later known as Mount Evans. Bierstadt's masterpiece Storm in the rocky mountains was based on that trip.[4]

Also in 1863 Byers purchased Hot Sulphur Springs in northern Colorado from a Minnesota Sioux woman in a shady deal, causing the real owners, the Ute tribe, to unsuccessfully sue. Byers' plans to turn it into "America's Switzerland" were foiled by the failure of the railroad to arrive until 1928.

William N. Byers died on March 25, 1903 and was buried in Fairmount Cemetery in Denver, Colorado.

A 1965 episode of the Western anthology series Death Valley Days purported to be the story of the establishment of the Rocky Mountain News, with Byers portrayed by actor Jerome Courtland.