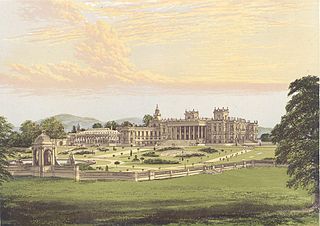 Witley Court in Worcestershire, England is a Grade I listed building[1] and was once one of the great houses of the Midlands, but today it is a spectacular ruin after being devastated by fire in 1937.

In the area close to Stourport-on-Severn there are several large manor and country houses, among which Witley Court, Astley Hall, Pool House, Areley Hall, Hartlebury and Abberley Hall (with its clock tower) are particularly significant.

Witley Court was built by Thomas Foley in 1655 on the site of a former manor house near Great Witley. Subsequent additions were designed by John Nash in the early 19th century and the Court was subsequently bought by the Earls of Dudley in 1837. The house and 40 acres were acquired in 2008 by a wealthy family for less than £0.9m, but remains in the guardianship of the Secretary of State for Culture, Media and Sport, and managed on their behalf by English Heritage since 1984. 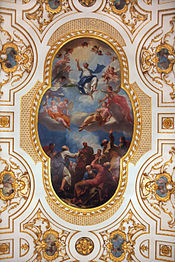 The earliest building on the site was a Jacobean brick house constructed by the Russell family. After the Civil War the house was sold to Thomas Foley (1616-1677), an ironmaster. He erected two towers on the north side of the house and his grandson Thomas Foley, 1st Baron Foley (1716–1777) added the wings which enclose the entrance courtyard.

In 1735 the Thomas Foley, 2nd Baron Foley (1742–1793) constructed a new parish church to the west of this courtyard, an undertaking begun by his father. The church was given a remarkable baroque interior in 1747 when he commissioned James Gibbs to incorporate paintings and furnishings acquired at the auction of the contents of Cannons House. This was the magnificent Middlesex home of the Duke of Chandos from where the artwork was shipped by canal to Great Witley.

In the second half of the 18th century the park was landscaped. This included sweeping away the village of Great Witley, which came too close to the south front (rear) of the house. The village was re-located to its present position.

In about 1805 Thomas Foley, 3rd Baron Foley (1780–1833) employed John Nash to carry out a major reconstruction of the house, including the addition of huge ionic porticoes to the north and south fronts. The portico on the south front is probably the largest on any country house in England.

The Earls of Dudley

From 1843 to 1846 Witley Court was lent to Queen Adelaide, the widow of King William IV, who required the pianos in the house to be tuned. A local man, who had recently moved from London to set up his own music dealership and piano-tuning business, was recommended. That man was William Elgar (Edward Elgar's father), who was then to display the royal warrant on his business stationery. Edward Elgar became a friend of the Earls of Dudley thereafter because of his father's work at the house and would perform for them on the piano in the ballroom. Whilst at Witley Court she had two chaplains – Rev. John Ryle Wood, Canon of Worcester[2] and Rev. Thomas Pearson, Rector of Great Witley.[3]

In the 1850s, William Ward, 11th Baron Ward (later 1st Earl of Dudley) engaged the architect Samuel Daukes, who had already altered his London house, Dudley House on Park Lane and the church at Great Witley, to remodel the house in Italianate style using ashlar stone cladding over the existing red brickwork. He also commissioned the garden designer William Andrews Nesfield to transform the gardens. This was Nesfield's 'Monster Work'.

In 1885 the 1st Earl of Dudley died and his son William Humble Ward, 2nd Earl of Dudley (1867–1932) inherited the property. His wife was Rachel Ward, Countess of Dudley (née Rachel Gurney). The photos below show this couple and some of the parties that they held at Witley Court during the time that they owned it.

In 1920 Witley Court was sold by the 2nd Earl to Sir Herbert Smith, a Kidderminster carpet manufacturer. Sir Herbert maintained only a skeleton staff to manage the house whilst he and his family were away, and many areas were left unused. A major accidental fire broke out in September 1937, whilst Sir Herbert was at another of his houses. It started in the bakery situated in the basement room of the now least preserved tower. The staff tried to put the fire out with the ancient fire pump, which was connected to the fountain, but it failed to work as it had not been maintained for many years. Although only one wing of the house was gutted by the fire and the rest of it was almost intact, the insurance company declined to cover the major damage, so Sir Herbert resolved to sell the property. With the Second World War looming on the horizon, it didn't realize the amount it was thought to be worth. So the estate was broken up and sold in lots. The house was bought by scrap dealers who stripped what they could from the house, leaving it an empty shell. In 1972 the remnants of the house and garden (excluding the church) were taken into care by the government, via a compulsory guardianship order. Almost 70 years after the devastation, its ruins are still spectacular, and today the property is in the care of English Heritage. Great Witley Church, which is attached to the ruins, survived the fire, and so visitors can still view the paintings in it. 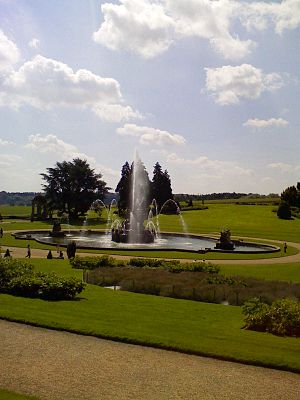 The Perseus and Andromeda fountain

The two immense fountains have survived. They were designed by Nesfield and executed by James[4] and William Forsyth,[5] who were carrying out sculpture in the house and the church. The largest, the Perseus and Andromeda Fountain, has been restored to working order by English Heritage.[6] For working times, see the Witley Court English Heritage website (link below). The remnants of Nesfield's magnificent parterres can also be seen.

In 2003 Witley Court's owners, the Wigington family of Stratford-upon-Avon, who had acquired it in 1953 for £20,000, placed the freehold for sale on eBay for £975,000. However, the arrangement with English Heritage was to remain unchanged, regardless of who bought the site, and Witley Court would continue to be a visitor attraction.[7] The sale was re-launched 2008 and Witley was sold for less than £0.9m to a wealthy family.[8]

In more recent times, the original plans and designs for the formal gardens have been discovered, and they are in the process of being restored. The main area of the gardens, the South Parterre, between the house and the Perseus and Andromeda fountain, has already been completed. Meanwhile, work on the East Parterre region is ongoing.

A video made in 1967 by the band Procol Harum used Witley Court as the location. At this time the site was completely derelict. The video link is given below under "External Links". The enormous difference that the restoration work has made can be estimated from this 1967 video.

Witley Court circa 1900 before the fire.

A panorama of Witley Court. The gold dome is that of the adjoining, and restored, church.