Woes of the Pharisees 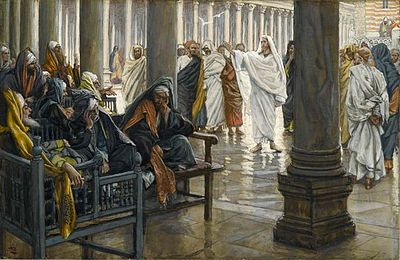 James Tissot, Woe unto You, Scribes and Pharisees, Brooklyn Museum

The woes mostly criticise the Pharisees for hypocrisy and perjury. They illustrate the differences between inner and outer moral states.[1]

The woes do not occur in the same point of the narrative in the Gospels of Matthew and Luke. In Matthew they occur shortly before Jesus returns to Jerusalem for his last few days before being crucified, while in Luke they occur shortly after the Lord's prayer is given and the disciples are first sent out over the land. Before introducing the woes themselves, Matthew states that Jesus criticized them for taking the place of honor at banquets, for wearing ostentatious clothing, for encouraging people to call them Rabbi.

The woes are all woes of hypocrisy and illustrate the differences between inner and outer moral states.[1] Jesus portrays the Pharisees as impatient with outward, ritual observance of minutiae which made them look acceptable and virtuous outwardly but left the inner person unreformed. See also Letter and spirit of the law.

The seven woes of hypocrisy are: